WE COULD BE HEROES 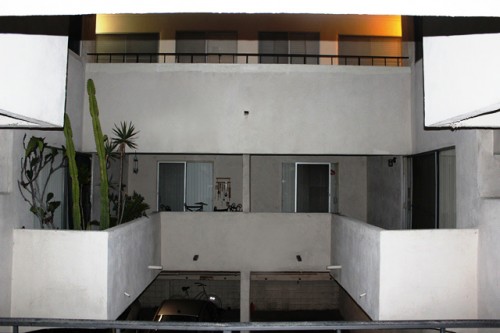 My ass was dead asleep when something shook me awake.  I heard muffled moaning sounds coming from the apartment next to my bedroom.  The moans were not the sexual kind.  I formed the voice of a woman coming from a what sounded like a speaker phone of sorts.  My half-asleep brain was able to unscramble the words “Life alert” “heart attack” and “the paramedics are on their way.”  I came to and thought about my neighbor next door.  He is well into his 90’s.  I thought, “Oh fuck, the old man is having a heart attack!”

I shot out of my bed and ran down the hall to peek into his bedroom from his balcony that’s right next to my balcony.  His blinds were open.  A dim light showed me the top of his head protruding from his bed.  It looked like he was sitting on the floor. Did he fall?  I tried his front door, but it was locked.  I heard his two little dogs barking at once.  Then I realized the paramedics would probably have to break his door in.  The man needed help.  I decided to enter his apartment by climbing from my balcony to his.  Our balconies face a courtyard that hangs above the parking lot below (see picture above).  It’s about one story high.  If I fell, I would probably break my ass bone, but it would not kill me.  What else was I supposed to do?  Go back to bed?

I carefully stood on the ledge, I pressed my hands over the balcony ceiling and carefully stepped one leg onto his balcony and climbed into his space.  His sliding door was open, so I let myself into his bedroom.  I found myself standing over this old white man (very white), in an old t-shirt and pajama bottoms.  He was clutching his chest in a cliché I’m-having-a-heart-attack fashion. “Are you OK?” I asked him; foolishly, in retrospect, but I was still a little groggy.  He didn’t respond.  “I’m going to open your door for the paramedics to get in and I will hold your puppies, OK?”

The apartment was oven-hot and stuffy.  The walls had a yellowy tint that cast a dingy glow everywhere.  Of course, the place reeked of old, OLD man (very old) and the two dogs didn’t help matters much; they clearly have not been groomed in years.  It smelled bad.

The man just sat on the floor without saying a word.  Much to my surprise he looked up and glared at me with what looked to me like silent scorn.  I didn’t expect him to be happy to see me, but I also didn’t expect him to be ticked off.  Then two things came to my mind:  He probably didn’t take too kindly to me breaking into his home like Cat Woman while he was down for the count.  And it also occurred to me that this man goes waaayyy back to dem olden dayz when they had spicks and spooks.  I’m probably the last face he wanted to see in his bedroom on what could well be his last moments on earth.

I heard the sirens.  I let the paramedics in without any trouble while I held his two dogs.  I will never forget this–the man looked up at those paramedics gathering around him and I saw flashes of fear in his face, which I found very bizarre.  He looked scared.  And the fear only distorted his face more as they piled him on top of the gurney.   I guess the Life Alert system alerted a woman that takes care of him who lives down the street, because she came rushing in and started gathering his personal things like pills, clothes and such.  The woman kept calling me a hero.  She kept thanking me for being brave and so forth, but I just waved a dismissive hand at her, telling her that was nonsense.  All I did was open the door.  What else is someone supposed to do?

Anyway, so the ambulance carried him away.  The caregiver thanked me while she locked up his apartment.  I walked her to her car and waved goodbye.

Of course right then and there I realized that the only way BACK inside my apartment was the exact same way I left it…through that old man’s balcony.  My ass was locked out of my apartment in the middle of the night.  Then I realized I was also standing outside of my apartment in my underwear and a flimsy tank top (boxer briefs, in case you’re wondering).

I was cursing the universe and telling myself this is what I get for not minding my own business–however, the universe responded by sending that woman back in the building a few moments later.  She forgot to turn off the man’s heater.  She was terrified that I had to climb back through the balcony.  I was scared also.  It was harder the second time without the adrenaline rush.  It was like climbing a tree.  Easy to climb up; not so easy to climb down.

Anyway, all ended well.  The man had open heart surgery.  They flushed out his pipes and he was good as new.  He was 95 years-old.

Shortly after, there was a knock on my door one evening.  It was the man and his caregiver.  He was leaning into a walker.  It didn’t even occur to me to invite them inside.  They stood outside my door and the woman spoke for the man as if he were a child.  “He wanted to come here and to thank you for being his hero.”  The man forced a slow smile.  My inside voice was like, “Eeeww!” 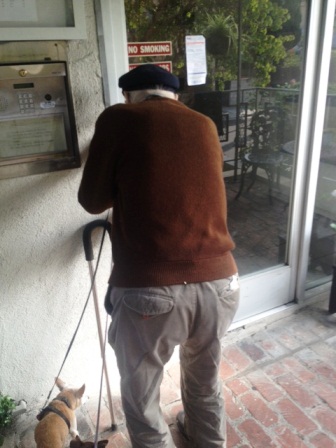 The man ditched that walker after a couple of weeks and can now be seen walking up and down the street with his two old little dogs like clockwork.  This happened a good three years ago, so he’s now pushing his way into 100.  I never forgot that fearful look in his face that night.  It really fucked with my head.  I always assumed people that old were good to go.  I assumed people that old gave up the good fight after living the good life, and they looked death in the eye told it to bring it on, but this man was clearly afraid to die.  This disappointed me to no end, mostly because it forced me to reflect on my own mortality, what’s important in life and if I would want to continue living after doing it for so damn long.

I don’t know the first thing about this man, but it seems like we have some sort of connection after that scary night–meaning I now run into him A LOT, mostly when I’m in a hurry to get somewhere and I’m stopped in my tracks while waiting for him as he struggles to walk down the hall walk up/down the stairs or open the front building door.  I want to tap my toe and my inside voice wants to yell at him to hurry the hell up, but I reckon I’m supposed to learn something from this little old white man.  Life is too short?  Life is too precious?  Be kind to your neighbor?  Don’t be a hero?

You figure it out.

REALITY TV: THE EXACT OPPOSITE OF REAL USING DREAMS