THE WORLD KEEPS SPINNING ROUND & ROUND!!! 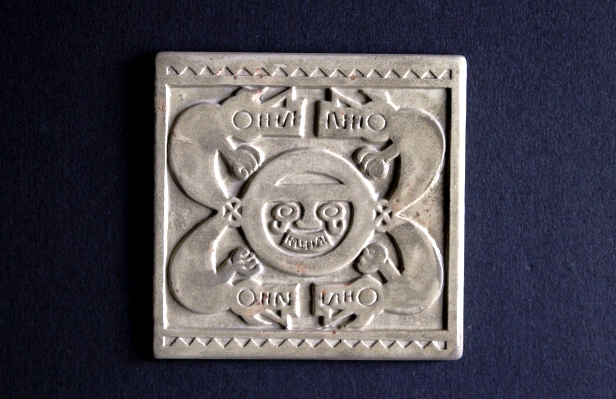 I don’t know why, but the end of the Mayan Calendar and all the hoopla that it has been given these past couple of years reminds me of a friend who I know dearly and love deeply.

Funny story:  He tried to kill himself when he was a teenager way back in the days before there was anything that resembled MTV, or YouTube or celebrities telling a gay teen how it gets better.  He decided to make his exit by popping a handful of sleeping pills.  However, he was clearly a pill short of an American version of Hari-kari (I think that’s how you spell it, I don’t speak Samurai), cuz he woke up a couple of hours later feeling groggy as all hell and a horrible headache.  He says he opened his eyes and he let out a scratchy, “WHAT!!!???”

But the bitch was determined to make that day his last day on this planet.  He went into his parents garage and attached one end of a hose to the muffler of his mother’s car and the other to end he jammed into the half-open window of the car like he’d seen ’em do on TV.  He made himself comfortable in the driver’s side and waited for something to happen. He’ll show them.  HE’LL SHOW THEM ALL!!!  And you wanna what happened next?  Nothing happened is what happened.  Death did not come.  He sat there feeling frustrated with the car ignition running slowly.  He made a fist and started pounding the the sides of his car seat.

“SHIIIEEETTTT!!!” He screamed at the top of his lungs.

Of course his mother heard him.  She pulled him out of that car and gave him a shaking, cuz that’s what you do when your kid wants to pass himself away; you shake ‘im  (in recovery they strongly advice you not to kill yourself in the first couple of years of sobriety.  You could be killing the wrong person).

He’s alive and well today obviously and plans to be a cranky old man who can say whatever the hell is on his mind.

Anyway, I’m forced to wonder how many people in the world woke up this morning and screamed, ” SHIIIEETTT,”  when the sun came out no differently than it did yesterday, cuz there are people on this planet who honestly believed this was the end of days.

On a side note, the city of West Hollywood is having an End of the World celebration, or End of the Mayan Calendar event where business align to offer specials and so forth. I wrote about it for the WEHO Hot Topic in Frontiers Magazine.  I also asked three people if they thought the world was going to end today for the man-on-the-street Speak Out portion of the page. 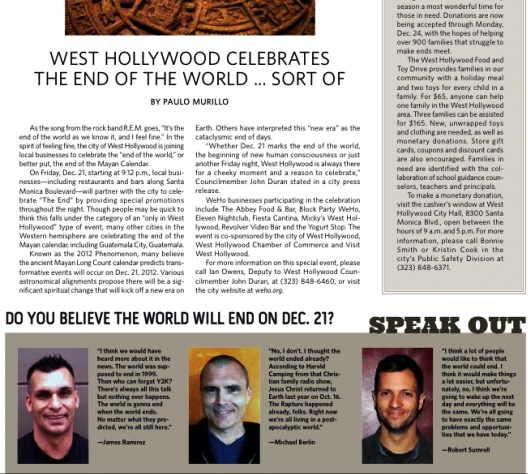 The guy in the middle had the following response:

“No, I don’t.  I thought the world ended already?  According to Harold Camping from that Christian family radio show, Jesus Christ returned to earth last year on October 16. The Rapture happened already folks.  Right now we’re all living in a post-apocalyptic world.”  Michael Berlin

OK, so the world didn’t end today. I’m willing to settle for some spiritual enlightenment.