REALITY TV: THE EXACT OPPOSITE OF REAL 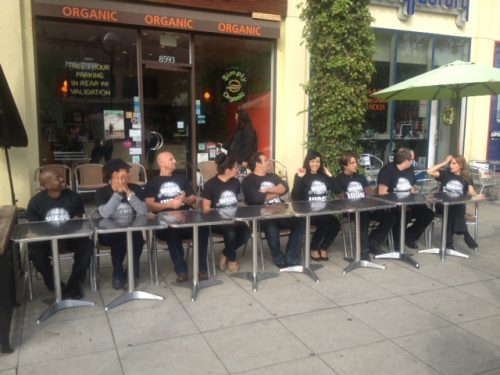 There was a huge commotion in West Hollywood the other day with a one of those giant SUV limousines driving up and down Santa Monica Blvd before unloading a camera crew and a whole bunch of people outside of the Big Gay Starbucks (I hang out at The Big Gay Starfucks for way too long as you may’ve noticed from this here hissfit).  The people parked inside the starfucks establishment barely looked up from their open laptops to see what the commotion was about outside.  Camera crews in WeHo are about as as common as seeing a man walk down the street in wig and high heels (meaning, very common).

It wasn’t until my friend and I were done with our coffee that we figured out what the cameras were for.  They were filming that reality TV show Burger Wars outside of O-Burger, which is a healthy organic burger joint right next to Starbucks.  The contestants were lined up outside the patio wearing their Burger War t-shirts.  They were sitting ducks and at the mercy of the open public taking pictures of them.  I pulled out my phone and got right in front of them, figuring that was the norm.  This would be a hissfit-worthy picture.  Of course, looking at this image, I kind of felt bad for these burger cooks who signed away their souls to be at the mercy of public pokes and probes.  Notice how most of them looked away from me?  One of them is actually covered her face.  I don’t know why this made me sad—OMG, and how embarrassing to have the word “burger” anywhere on your person?  It’s like that Dawn Wiener girl from the movie Welcome to the Dollhouse being called Wiener Dog (“You think you’re hot shit, but you’re really just cold diarrhea.”)  It’s like being The Biggest Loser.  Yeah, you’re on TV, but seriously, how embarrassing.  I would not want to link myself to any form of food, especially the fatty kind.

What fascinated me the most about this reality TV setup is the entourage behind the camera. You had a director shouting and feeding the constants lines and telling them where to stand, “OK. Now move here and walk around here and tell her to get out of your way.”  I’m sure it made the whole circus scene something more surreal than real.  Actually it made it more of a joke than must-see-TV. 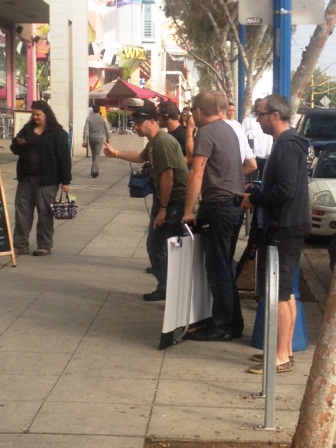 The whole thing made me think of that episode of Family Guy where Peter is at a store playing a keyboard synthesizer really well.  Then he removes his fingers and the music keeps playing.  A guy points at Peter and yells.   “So phony.  You’re all just big fat phony.  This guy’s a phony.  Hey, YOU!  You’re a phony.  PHONY!”

I so wanted to embody that guy.  And start screaming down the street.

GRAMMY 2013 – MADONNA GETS SNUBBED…YET AGAIN WE COULD BE HEROES