MAN GETS HIT BY CAR IN WEST HOLLYWOOD

Too much to write about.  Too little time.

Funny story:  A guy got hit by a car last weekend on Friday, December 14, in the heart of West Hollywood.  It happened around 8:20 p.m. on the Santa Monica Blvd crosswalk that’s by West Knoll Dr, right next to Koo Koo Roo.

The pedestrian crosswalk situation can be a treacherous one on Santa Monica from La Cienega to Doheny if you’re not careful.  I always cross that street with caution because people can drive like assholes in Los Angeles–especially at night.  I never need to be somewhere so dire that I would jump in front of moving traffic to get to the other side of the street.  For the most part, cars keep on rolling by.  Live in WeHo long enough, and you’re bound to hear about how pedestrians get hit, or almost get hit while they are trying to get from one side of Santa Monica Blvd to the other–either to get to their Venti coffee cup, or to get a beauty pump at the gym.

Cars can also get hit.  I’ve witnessed cars stop for a pedestrian, and the car behind that car forget to pump the breaks.  Suddenly you have yourself a car collision that backs traffic up for miles and delays people for hours, which totally defeats the purpose of speeding from one red light to the next.  I remember a guy in a motorcycle hit the car in front of him that stopped for me and a friend while we were crossing the street.  The guy flew off his bike and landed at our feet.  It was freaky.

I hear about it all the time, but I’ve have never been nearby when a pedestrian has been hit by a car.  That is, until last Friday night.  I didn’t see it actually happen. but I was seconds away from when and where it happened.  I was sitting on the passenger’s side of my boyfriend’s ride when there was a screeching halt all around us.  I saw people jumping out of their vehicles and head towards the median.  I did the same.  A guy was on the floor.  He apparently got hit while crossing the street on the north side of the median.  The guy appeared to be in his mid to late 20s.  He was shirtless on a cold night, which makes me believe that he is homeless.  I’m not sure how hard he got hit.  He tried to get up, but everyone told him not to move.  He wasn’t bleeding.  And all his limbs appeared to be in place, but I’m not a doctor.  There was a doctor on hand, however; he bent over him and pulled out a flashlight to check his pupils.  There were questions about the car that hit him.  Was it a hit and run?  But the car was parked down the street in front Starbucks.  His friend had chased him down and was keeping an eye on him should he decide to run.  All I can tell you is that it was a black car.  The man remained in the car.   He appeared to be in shock.  The hit guy was in the hands of a doctor and the police were first on the scene, followed by paramedics and finally an ambulance.  The police dispersed the crowd.  There really wasn’t much for us to do.

The guy’s friend rushed to the scene when the police arrived.  He was tall with a buzzed bald head, some missing teeth and wearing a sleeveless shirt and shorts on a cold night. The guy was jumping up and down and laughing out loud, which made the cops nervous.  A cop immediately told him to sit on the ground.  The guy kept looking down at his friend on the floor and going, “You’re lucky bitch!  You got some money coming to you.  You’re so lucky.  HAH!” 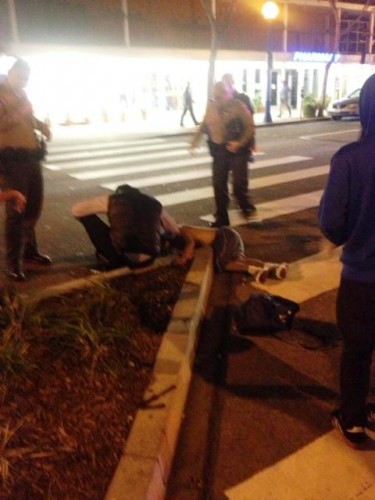 OK, so in retrospect, and in all fairness, it may have been in poor taste…maybe.  The timing may have also been fucked, because of the horrible tragic shootings that happened earlier that day.  I admit the photo is graphic, but you can’t see the guy’s face, you can’t see any identifying marks, like tattoos and so forth.  You can’t even tell the color of his shorts–are they grey, blue, or green?  Nor can you tell what kind of shoes he’s wearing.  I figured I had taken all precautions to protect the guys identity.  Others didn’t see it that way.

People engaged.  Some people even shared the photo.  Some people found it disturbing.  And some people were not interested in talking about pedestrian safety at all; they were more interested in calling out the asshole that took this photo and posted it on Facebook.  Fair enough.  People have the right to their opinion.  I posted the photo on my own personal wall.  You’re allowed to comment that you don’t approve, but you’re not allowed to be a bitch about it.  It’s my wall.  I don’t go into people’s Facebook accounts to talk shit about the dumb shit they post on their walls (I want to, but I don’t).  I say, if you don’t like the photo, don’t look at it.  Delete me from your friends list if you wish.  I seriously do not have a high flying fuck to give.  But that’s not how it ever goes down, is it?

A guy who I actually know and like, turned on me and said that I had no class and made some weak attempt at being cunty; I’m not sure if he called me a drag queen or if he posted that my writing is a drag, he was so reactive with venom dripping from his fingertips that he tripped over himself.  (I’d never been rude to this person btw—EVER!).   Another guy I barely know called me a mutherfucker and said he’d hunt me down and sue me if I ever took a photo of him incapacitated.  Meanwhile, there isn’t a single person in the world who would want to take this poor guy’s picture–incapacitated or otherwise.

Then they came for me via private messages, telling me to remove the photo.  I told one bitch to fuck off—something I haven’t done in years, which I hate to admit, felt really good.  He responded with the following:

How DARE that bitch call me moronic!!!

I took his advice and deleted him instead—“Are you sure you want to block this person?” YES!  I’m sure.

Anyway, the point of the photo was pedestrian safety.  Back in October I wrote about how the city is focused on pedestrian safety and how they were making landscape alterations to improve the visibility at mid-block pedestrian crossings.  This includes the addition of flashing beacons on the crosswalk that intersects Westmount Dr on Santa Monica Blvd, which is a short block away from West Knoll Dr. The city press release posted that the project would be completed in early November.  We’re at the end of December.  Landscape improvements have been made, but the flashing beacons remain to be seen.

Hey, don’t get mad at me.  I’m just calling it and posting it like I see it, WHEN I see it.

Regarding the guy that got hit, I think he’s going to be OK.  I hope he gets some money from this so that he can buy himself  a shirt to wear on cold gloomy nights.

In closing, I can’t stress this enough:  TAKE ALL PRECAUTIONS BEFORE CROSSING THE STREET.  Don’t assume a driver can see you because he most likely can’t while he’s texting and rushing to stop at the next red light.

PS: Oh yeah, just kidding about saying this is a “funny story.”  Don’t get your pantie hairs all twisted in a silly bunch.

IT’S NOT OKAY MEET THE PARENTS IN SAN FRANCISCO