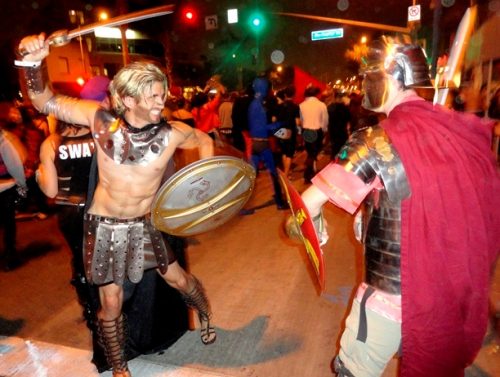 “I have to dress up.”  I told my boyfriend Kev.

“Look, I don’t make the rules.  I have a contract with the city.” I added.  “My costumes have to be shirtless.  I’ll be sued for breach of contract.”

“I don’t think the city is aware of this contract.” He said pointing to my forehead like my ass is kerazy.

Umm, RIGHT, like I would EVAH repeat a costume on Halloween night.

This year I drew inspiration from the Mother of re-invention, Madonna (not ashamed/no explanation/no apologies).  2012 was a good year for M.  And there was no greater moment for her this year than her Super Bowl Halftime performance where she embodied an Egyptian queen clad with half-naked gladiators.  SOOOooo a gladiator was the obvious choice for the West Hollywood Halloween Carnival Ho Stroll 2012.

My friend Alberto also gets into the spirit of Hallows Eve.  The bitch is Mexican, so you best believe he’s good with some Papier-mâché.  He’s always creating monsters, and dragons and all kinds of kerazy ass creatures.  He and I have always hit up Halloween together–in fact, I only see him once a year on Halloween night.  We came up with this idea to be a matching gladiators.   He would be the bad gladiator and I would be the good one–meaning he would be ugly and I would be the opposite of ugly (evil grin).  We would battle it out on the streets of WeHo.  The crowd was bound to go nuts.

I purchased a costume out-of-a-bag on Ebay that I had to alter to make it one-of-a-kind.  It was make-it-work time.  I bedazzled the shit out of it, I added studs, black elements and mirror pieces to give it some of the luxury that I witnessed on the Super Bowl this year.  The most expensive part of my costume were the sandals, which I plan to put back on the Ebay market.  I also bought the sword at a costume shop, which I had to spray paint silver to match my getup.  Oh yeah, I found a trashcan lid in my boyfriend’s backyard that I turned into a gladiator shield.  I gave you a black cape, blond locks and I tried to polish my toenails, but I’ve never been that kind of gay. The black nail polish got everywhere.  I gave up after the big toes.  I aimed more for masculine gladiator than an effette Madonna wannabe.  I also tried to give you tits and tight abs, even though I didn’t get a chance to workout due to a cold and cough that’s was still lingering—a cold that I gave Kev, so he was off the hook for this year’s carnival. 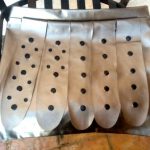 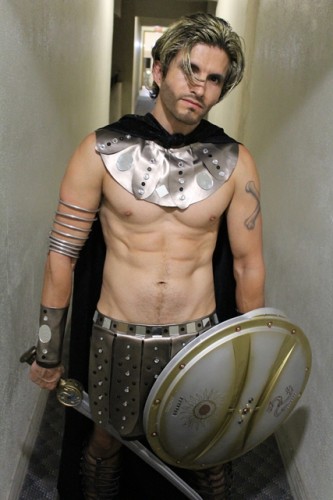 I kind of let Alberto do his thing with his gladiator costume.  We tried to get together to exchange ideas, but it never happened.

So what happened on Halloween night, you ask?  The bitch made three trips to his car.  He pieced together this HUGE over-the-top monster with horns sticking out everywhere and scales running down his back with bones protruding from his rib cage and claws coming out of his knees.  He even had a dragon crawling up his arm with glowing eyes, which made his costume more Dungeons & Dragons than Gladiator.  Needless to say, he went overboard and blew my ass out of the water. 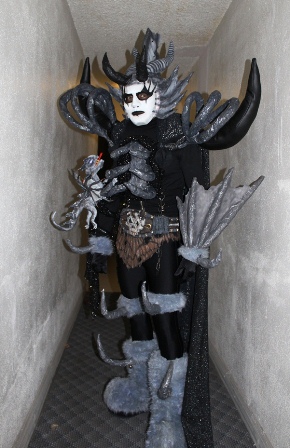 So what happened when we hit the Boulevard, you ask?  I stood next to Alberto’s creature creation and people tapped me on the shoulder to get me out of the way.  THAT…was so WEIRD.  Then people tapped me on the shoulder to ask if I could take a picture of them standing next to Alberto’s creature.  ME? TAKE A PICTURE?  Is it Opposite Day?  I’m confused.  Now don’t get me wrong, I had it going on; the reception to my gladiator getup was well received, but I was no match to Alberto’s dragon monster.  The people that rushed to take my photo, would then rush past me to get a photo of that bitch.  It was kerazy!!!  We seriously could not move.  People were lining up to get a photo with the Kiss Monster as somebody called him.  And I seriously couldn’t hate.  This was the best costume he’s ever created and it was probably the best costume on the boulevard.  I HAD to give him props.  I didn’t want to.  But I HAD to.  There’s no way around it.  The bitch stole my shine.  PHOTO BOMBED!!!  I stood on the sideline and pretended to send important text messages to important people. 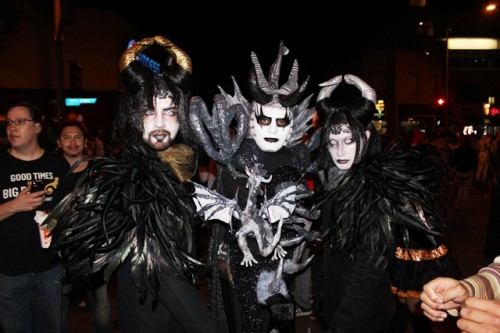 I don’t do well on the sidelines.  Ask anybody.  Luckily, I met up with two friends who rescued me from that nonsense and kept me company.  There was really no point in trying to move. We sort of stood in one place.  I let Alberto have his moment and we sort of let the costumes come to us instead of trying to walk through the crazy crowd.  Committing to one destination was also a Halloween Carnival first for yours truly.  We stood in front of 24-Hour Fitness and watched the costume pass by.  And I gottah tell you, we had a fucking BLAST.  A lot of people dressed up this year.  I caught a few costumes that were repeats from last year, which to me is a major Halloween no-no, but for the most part, there was a lot of crowd participation.  I’m talkin’ about all walks of life, straight/gay/men/women/young/old and there were some strollers on the boulevard even though children discretion was advised. 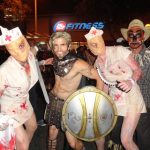 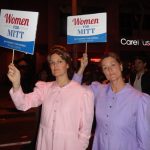 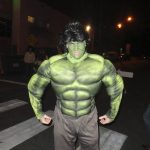 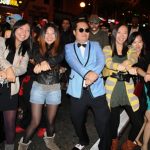 It was another successful Halloween Carnival for the City of West Hollywood, which only seals this city as a creative and fun destination that is bound to bring revenue to local businesses–especially with the holidays coming up.  The crowd was MASSIVE!!!  The police presence was reassuring.  And the cleanup afterwards was swift.  My only regret for the night is not running into a Super Bowl Madonna on the street.  I was sure there would be a few.  I did however run into other gladiators which made for some cool photo-ops.  I got to battle it out with an evil–less-than-cute gladiator after all.

PRE-HALLOWEEN UNDER THE SEA MANNING UP USA