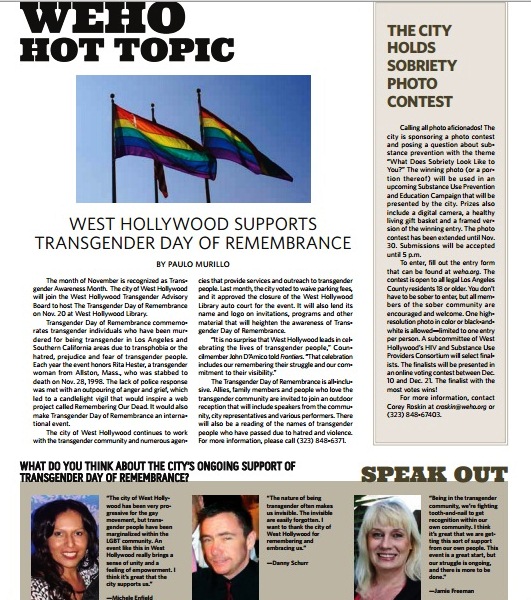 Transgender Day of Remembrance commemorates transgender individuals who have been murdered for being transgender in Los Angeles and Southern California areas due to transphobia or the hatred, prejudice and fear of transgender people. Each year the event honors Rita Hester, a transgender woman from Allston, Mass., who was stabbed to death on Nov. 28, 1998. The lack of police response was met with an outpouring of anger and grief, which led to a candlelight vigil that would inspire a web project called Remembering Our Dead. It would also make Transgender Day of Remembrance an international event.

The city of West Hollywood continues to work with the transgender community and numerous agencies that provide services and outreach to transgender people. Last month, the city voted to waive parking fees, and it approved the closure of the West Hollywood Library auto court for the event. It will also lend its name and logo on invitations, programs and other material that will heighten the awareness of Transgender Day of Remembrance.

“It is no surprise that West Hollywood leads in celebrating the lives of transgender people,” Councilmember John D’Amico told Frontiers. “That celebration includes our remembering their struggle and our commitment to their visibility.”

The Transgender Day of Remembrance is all-inclusive. Allies, family members and people who love the transgender community are invited to join an outdoor reception that will include speakers from the community, city representatives and various performers. There will also be a reading of the names of transgender people who have passed due to hatred and violence. For more information, please call (323) 848-6371. 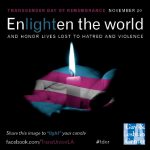 What do you think about the city’s ongoing support of Transgender Day of Remembrance?

“The city of West Hollywood has been very progressive for the gay movement, but transgender people have been marginalized within the LGBT community. An event like this in West Hollywood really brings a sense of unity and a feeling of empowerment. I think it’s great that the city supports us.” —Michele Enfield

“The nature of being transgender often makes us invisible. The invisible are easily forgotten. I want to thank the city of West Hollywood for remembering and embracing us.” —Danny Schurr

“Being in the transgender community, we’re fighting tooth-and-nail to get recognition within our own community. I think it’s great that we are getting this sort of support from our own people. This event is a great start, but our struggle is ongoing, and there is more to be done.” —Jamie Freeman

I interviewed a fourth person for the SPEAK OUT section of this piece.  Her name is Zinia Jones, she’s a self-proclaimed atheist activist, writer and video blogger who tackles subjects surrounding religious beliefs, political follies and LGBTQ issues.  Unfortunately I didn’t get her response in time for my Hot Topic deadline.  Below is her response to the same question.  I spoke to four transgender individuals and all four spoke about the struggle of being a minority within a minority.

“It’s wonderful to see West Hollywood leading the way in recognizing
what is too often a forgotten segment of the population. As a
relatively small minority, it’s easy for us to be left behind as
little attention is given to the staggering rates of violence and
societal exclusion we face. As more and more locales like WeHo take
the initiative in officially acknowledging our struggles, I’m
confident that this will begin to change.” 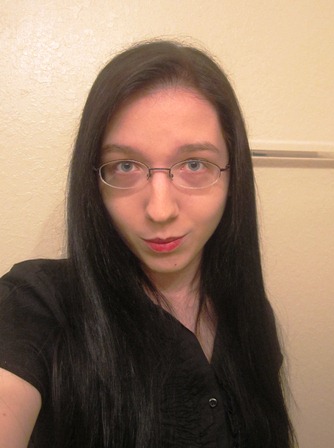