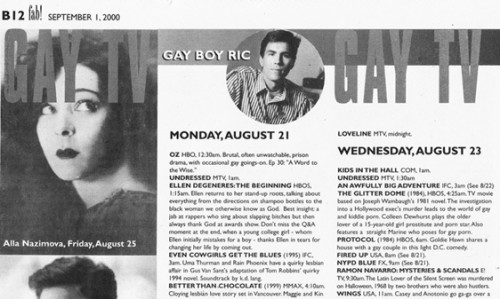 Do you guys remember Gay Boy Ric?  I kinda do.  He and I used to write for the same newspaper way back in the day.  I wrote the “Luv Ya, Mean it” column and he had a Gay TV listings page that gave you all things gay on the tube.  Remember him???

I don’t know much about Gay Boy Ric.  I never met the guy.  We never bothered with so much as an email, but I was always curious about him.  Not only were we both Latinos writing for the same newspaper (he was born Ricardo Garcia), but he stirred the shit with some controversy of his own by taking Eminem on back in the dayz when Eminem posed as a real baddass with his angry anti-gay-for-pay raps about fuck faggots this and faggots that.  Remember Slim Shady?  Yup, that bitch was exactly THAT–shady.

I remember Gay Boy Ric’s fuck Eminem website.  You found lyrics to his own raps which responded to a Slim Shady tune.  The GBR raps were horrible of course due to poor production value and they were silly— “I’m the only Gay Boy Ric. All the other Gay Boy Rics are just imitating.  So won’t the Real Slim Shady please shut up.  Please shut up. And kiss my butt.”

There was also video footage of a show that was exclusive to the West Hollywood Public Access channel where he stood against a door inside a horribly lit room (probably his bedroom) and he discussed gay stuff ‘n’ junk.

The guy was a cheese ball where gay boys are concerned.  He was clearly tall and lanky and he dressed like a total dude–if not like a total dud with button-down shirts and a generic haircut straight out of Fantastic Sam’s.  It also fascinated me that he called himself a gay boy, even though he was clearly a grown man.  Maybe what resonated with me the most about him was that he wasn’t really “gay” enough for his moniker, in the same effect that I was never queeny enough for my title as the Queen of Mean—oh if I only had the balls to color my hair a bright pink hue and walk around dressed like a gay rodeo clown…the sky would’ve been the limit.

And yet Gay Boy Ric made an impression on me.  His smarts kept me on my toes in those early FAB! years–a time and place where being openly gay in itself had this sort of mystique, because people were supposed to keep their gay shit to themselves.  And of course his name went much further than mine did, on account of it wasn’t really his name and it latched on to Eminem’s success…in the same way that Paris Hilton’s name carried a certain Perez (speaking of gay rodeo clowns…).

Then one day Gay Boy Ric went away.  I took over his gay TV listings page, because someone had to do it.  This was around 2004.  It meant more money at FAB! even though I don’t believe a single person ever read that Gay TV listings page.  And I never heard about Gay Boy Ric again, mostly because I never bothered to ask.

I don’t know why, but I decided to search for Gay Boy Ric on the net the other day–mostly for nostalgic reasons.  AND I FOUND HIM!!!  I was sure he’d be some top executive at the Logo Channel, or have some legit song writing credits to his name.  However…I was genuinely sad to find him in the Passages section of the Windy City Times.  Yup, Gay Boy Ric is dead.  Has been since 2004.  According to WCT, he died of an illness, which in gay speak can only mean complications from something called AIDS.

I regret not reaching out to him when we were comrade scribes at FAB!  We probably would’ve had a good laugh.

And so it goes.

May we never forget the gay boy that coulda/woulda and kinda/sorta did. 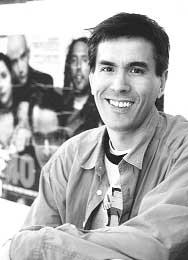 Below is the Windy City Times Passages section which lists off his credentials.

Windy City Times TV columnist Gay Boy Ric, a frequent guest on The Howard Stern Show and known for his ‘fuck Eminem’ Web site, has died. His mother sent WCT a note notifying us that he had died in Los Angeles after an illness.Gay Boy Ric was an actor/writer/comedian and pop/rap singer. He performed numerous one-man shows in L.A. and New York, most recently Gay Boy Ric: For Straight Guys Only! at Theatre/Theatre in L.A. and Surfing with The Straight Boys at The Comedy Store in L.A. In addition, he wrote a nationally syndicated column called GAY TV and was host of The Gay Boy Ric TV Show, seen on several public access stations in L.A. A regular feature on the The GBR TV Show is ‘The Keanu Song Corner,’ during which GBR and guitarist Dylan Kelly perform acoustic garage tributes to Keanu Reeves, including ‘Keanu, I’m Yours,’ ‘(Keanu, I’m Already) Torn,’ ‘Keanu Wants It That Way,’ and ‘Visions of Keanu.’ Ric discussed Eminem and performed his MP3 single on MTV’s FANOGRAPHY: EMINEM, MuchMusic Canada’s NEW MUSIC show and on PUBLIC EMINEM NUMBER ONE, a documentary that aired on the U.K. music channel PLAY UK and BBC Choice. As a pop/rap singer, GBR specialized in adapting classic rock and R&B songs to reflect and incorporate his own personal experiences. His ‘boom-box-quality-only’ cassette, Comin! At Ya!: The Ghetto-Blaster Bootleg Mix includes I’m Da Beastie Gay (Yo!), I’m Da Beastie Gay (a variation on Aerosmith’s and Run-DMC’s ‘Walk This Way’), Boys, You Know It’s True and Don’t Blame It on The Gays. Reflective of how deeply entrenched homophobia is in the music industry, Billboard magazine once tried to censor a GBR ad in their annual rap issue simply because it contained the song title, I’m Into GUYS! ‘They refused to print the title I’m Into GUYS!,’ recounted GBR, ‘even though the issue had song titles like ‘Suck on This, Bitch.’ The matter was only resolved when it was brought down to ad dollars and cents. I said I would withdraw the ad completely unless the title stayed. Rather than lose the ad, the magazine agreed to run the ad in its entirety.’Ric was born in Lake Charles, La., and was raised as a military kid overseas in Turkey and Spain. ‘We were Military Kids, not military brats!,’ Ric said. ‘It was the Embassy Kids who were the real brats!’ Even as a young child growing up in Turkey and Spain, Gay Boy Ric liked to hang out in coffee shops and drink black coffee.

IN THE FIGHT MAGAZINE GUTTER MORALITY