BACK ON BOARD – THE FIGHT MAGAZINE GREG LOUGANIS INTERVIEW 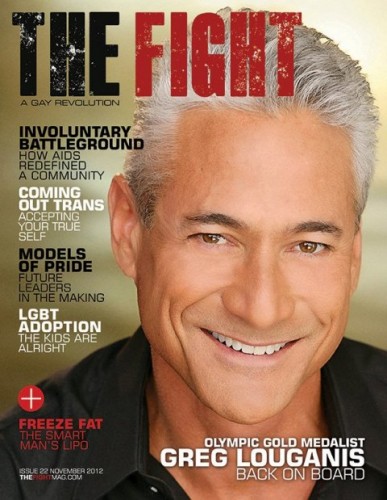 Check out the most current issue of THE FIGHT magazine.  I interviewed Olympic Gold Diving Champion Greg Louganis for the cover story.  I was actually invited to Greg’s home in Malibu to conduct my lil’ interview.  I was fine with our one-on-one.  Then I read somewhere that Oprah interviewed him for national TV and I became a nervous WRECK!!!  I don’t know why, Greg is actually very sweet once you get past his shy shell.  And of course he was more than generous and patient with some of my questions that I’m sure he’s heard many MANY times before.

Anyway, I’m no Oprah Winfrey, but I do my very best. 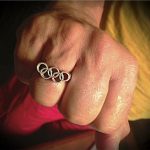 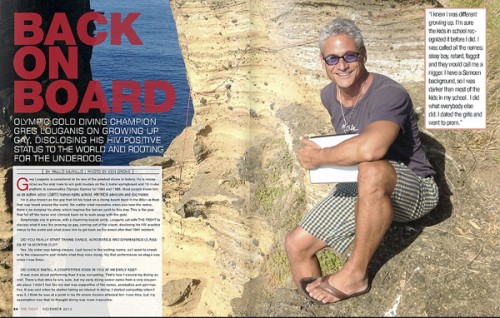 Or you can read the Q&A below.

Olympic Gold Diving Champion Greg Louganis on growing up gay, disclosing his HIV positive status to the world and rooting for the underdog.

Greg Louganis is considered to be one of the greatest divers in history.  He is recognized as the only male to win gold medals on the 3 meter springboard and 10 meter platform in consecutive Olympic Games for 1984 and 1988.  Most people know him as an author, actor, LGBTQ human rights activist, HIV/AIDS advocate and dog trainer.
He is also known as the guy that hit his head on a diving board back in the 80s — a thud that was heard around the world.  No matter what resonates when you hear the name, there’s no denying his story, which inspires the human spirit to this day.  This is the guy that fell off the horse and climbed back on to walk away with the gold.
Surprisingly shy in person, with a disarming boyish smile, Louganis sat with THE FIGHT to discuss what it was like growing up gay, coming out of the closet, disclosing his HIV positive status to the world and what drove him to get back on the board after that 1984 incident.

DID YOU REALLY START TAKING DANCE, ACROBATICS AND GYMNASTICS CLASSES AT 18 MONTHS OLD?

Yes.  My sister was taking classes.  I got bored in the waiting rooms, so I used to sneak in to the classrooms and imitate what they were doing.  My first performance on stage was when I was three.

DID DANCE INSTILL A COMPETITIVE EDGE IN YOU AT AN EARLY AGE?

It was more about performing than it was competing.  That’s how I viewed my diving as well.  There’s that drive to win, sure, but my early diving career came from a very desperate place.  I didn’t feel like my dad was supportive of the dance, acrobatics and gymnastics.  It was odd when he started taking an interest in diving.  I started competing when I was 9. I think he was at a point in his life where income afforded him more time, but my assumption was that he thought diving was more masculine

I knew I was different growing up.  I’m sure the kids in school recognized it before I did.  I was called all the names: sissy boy, retard, faggot and they would call me a nigger.  I have a Samoan background, so I was darker than most of the kids in my school.  I did what everybody else did.  I dated the girls and went to prom. It wasn’t until college really that I came out to myself.  I went to the University of Miami to get as far away from home as I could get.  I was 18 when I realized it was okay.  My mom and dad found out when I was 21 or 22.  I transferred back to UC Irvine and I got involved with a guy named Kevin.  We were together for almost 3 years.  It was a young, volatile relationship.  It seemed like at that point in his life it was all about reconnecting with family, so it was a byproduct that led me to come out to my family.  When we broke up, I was loading my things into a van and I told my mom, ‘mom, Kevin and I were more than just roommates, we were lovers.’ And she said, ‘I know son.  What’s for dinner?’  It was so casual. I copped out with dad.  I told her, ‘You tell dad.’

WHAT WAS IT LIKE COMING OUT TO THE WORLD AS BEING HIV POSITIVE?

It was a process.  I came out publicly at the Gay Games almost a year before my book came out [best-selling autobiography “Breaking the Surface” co-written with Eric Marcus].  We knew it was happening.  It turns out that Random House had Eric sign a contract stating that he would have the book done in a year because they were afraid I was going to die.  I held that secret for a long time.  I was diagnosed in 88 and then I came out publicly about my HIV in 95.  I told my dad before I told my mom.  He had just been diagnosed with cancer in 89.  He died in 91.

DID YOUR DRIVE TO COMPETE IN THE OLYMPIC GAMES AFFECT HOW YOU APPROACHED BEING HIV POSITIVE?

I think initially a certain amount of denial was healthy.  I was supposed to take AZT every four hours, but I had trouble remembering.  My doctor told me that I should approach my medication the same way I would my 8 o’clock workout.  You have to show up.  So I adapted that type of thinking into taking my meds.  It was just an extension of my responsibilities as an athlete.  I really focused on my diving.  I had a job to do and I was successful at it.  I never made HIV my primary career.

AT WHAT POINT DID YOU BECOME AN HIV/AIDS ACTIVIST?

I don’t view myself that way.  There are many organizations that I appear for because I can relate to them.  I spoke on bullying recently at the Peninsula Conflict Resolution Center. They have a lot of interactions with kids about bullying and building empathy and respect.  I make appearances if it’s relatable to me — be it gay, HIV/AIDS, or bullying.  Also what’s important to me is getting past that and finding a solution.  My solution may not be other people’s solution, but at least moving in that direction rather than living as a victim.

YOU WERE A MENTOR FOR THE 2012 OLYMPICS TEAM.  WHAT DOES MENTORING ENTAIL?

My primary focus was the Olympic hopefuls.  I worked with a lot of the divers that were in the elite program.  I also worked with some of the younger club divers.  That was kind of neat.  I asked just about all the athletes and coaches what their goals were and they all said it was to make it to the Olympics Team.  And then what?  I started getting them to train as if they were at the Olympics Games, because you have to practice very hard before you get there.

WAS IT TOUGH COMPETING IN FRONT OF LARGE CROWDS WITH SO MUCH PRESS?

Every experience is different.  My focus could be so narrow that I could see every rivet of the board and the water and everything else was hazy.  Other competitions such as 84, my focus was all over the place.  I noticed Mayor Tom Bradley coming late, trying to find his seat.  I was aware where my mom and dad were sitting.  It was a more open experience. The trouble is trying to duplicate it.  You have to be open and allow yourself the flexibility to be successful no matter what.

DOES HITTING YOUR HEAD ON THAT DIVING BOARD STILL COME UP…LIKE IT’S COMING UP RIGHT NOW?

It happened [smiles].  And it was really dramatic.  If you have some type of emotional or visceral response to something, it kind of burns into your memory.  What happened between me hitting the board and getting back on the board — that’s really the story.  I had to reach into something that was greater than myself.  What came to mind was Ryan White, the boy who contracted HIV through common factors as a hemophiliac.  I wanted to share my Olympic experience with him because we had become friends after People Magazine published his story.  He became my inspiration after I hit my head.  But also in stressful situations a lot of times it really takes humor to shake you out of the fear of the unknown.

WAS IT A BLESSING IN DISGUISE?

WHAT PROJECTS ARE YOU WORKING ON RIGHT NOW?

I’d like to do more TV and film.  I’m working on a web series called Old Dogs, New Tricks.  I’m getting married to one of the main characters.  I also have a documentary called “Back on the Boards.” We started that about a year and a half ago.  Our hope is to have it circulating around the film festivals by next year.  It would be the 25th anniversary of the 88 Olympic Games.  It follows my life after the book.  There’s this gap of people who know who I am.  The cutoff age is 27 or older, but 27 or younger—they don’t know who the heck I am.  Hopefully the documentary will change all that.

“I knew I was different growing up.  I’m sure the kids in school recognized it before I did.  I was called all the names: sissy boy, retard, faggot and they would call me a nigger.  I have a Samoan background, so I was darker than most of the kids in my school.  I did what everybody else did.  I dated the girls and went to prom.”

“My doctor told me that I should approach my medication the same way I would my 8 o’clock workout…  So I adapted that type of thinking into taking my meds.  It was just an extension of my responsibilities as an athlete.  I really focused on my diving.  I had a job to do and I was successful at it.  I never made HIV my primary career.”

BITCH PLEASE DO NOT SLAM THAT CAR DOOR