PRE-HALLOWEEN UNDER THE SEA 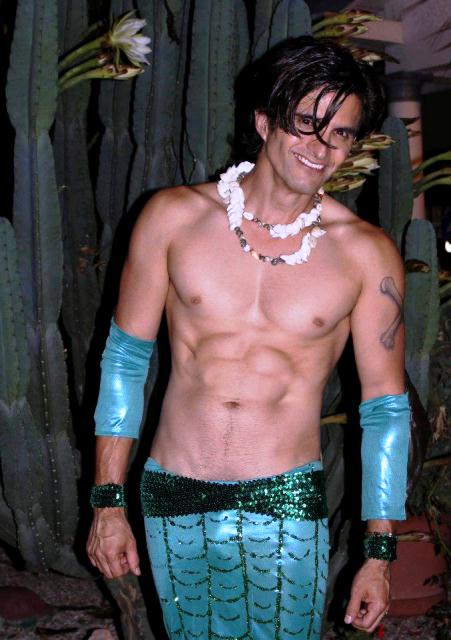 My ass went to a Halloween costume party recently.  It was a nautical theme.  The friend that invited me has always been good about showing up for me, so I didn’t want to half measure a costume.  At the same time I didn’t want to go nuts, cuz my ass can go nuts when it comes to a costume.  I decided to fish out an old merman costume that I wore about 10 years ago and update it to 2012.  This was a gay costume party, so I figured every single gay would show up to this party half-naked, cuz that’s how gays do.

So what happens???  I show up at this party giving you a fishtail with ass cleavage and a naked torso, and it turned out I was the only naked bitch in the room.  A lot of people I encountered did not stick to the script, let alone the theme.  I saw a drag queen that looked like Ronald McDonald, I saw a snowman, a teddy bear, some guys didn’t even bother to dress up.  And the reception was frosty from one side of the room.  I seriously felt like Elle Woods from Legally Blonde (minus the cute shoes) when she was tricked into showing up dressed as a Playboy Bunny to what she thought was a costume party.

There’s one guy in particular who made me EXTREMELY uncomfortable.  I sit next to this guy at The Big Gay Starbucks almost every morning and we never bother to so much as exchange a look, a nod, let alone a hello.  He’s one of the unfriendliest guys in the room.  I’m talkin’ about one of those scruffy fuckers who won’t talk to you unless you’re scruffy also—but don’t get it twisted…you can’t be any run of the mill scruffy fuck.  You kinda/sorta have to look like him for him to give you the time.  The look is exaggerated masculinity that resembles a lumberjack with a tat sleeves and an ironical beard—I say ironical beard, cuz I’ve seen this guy let down his guard when he chats with his bearded girlfriends; his face becomes animated and it’s the worst case of gay face you will ever encounter.  I don’t mean to go there, but the guy is not friendly.  I’ve seen it happen.  A guy will brave striking a conversation with this bitch and this bitch will literally get up and leave the guy hanging.  I get that people are insecure.  I get that people come off as unfriendly because they are self-conscious or self-loathing, but if you’re gonna act like a bitch, then there’s really no kind way to put it—Newsflash: You’re a fucking bitch.

He stayed in his corner wedged between his matching beards and I stayed in my corner.  A costume party and having mutual friends was not gonna make us chums.  I don’t know, maybe he thinks I’m a bitch also.

There was costume party contest towards the end of the night.  Did I mention this party was a nautical theme?  I was the only naked bitch dress like a fish, and guess who didn’t win?  The votes were determined by the audience participation.  I lost to Frosty the Snowman who really sold it to the crowd by carrying a bag of ice.  Can we say Robbed!?

It was all in good fun.  I walked away with the second prize which means I lost according to Miss Abbey Lee Miller (Dance Moms).

Anyway…I gotz to get back to bedazzling the shit out of my Halloween costume (you think I’m kiddin’).  I’m nursing a horrible cough, so we’ll see how tonight plays out.  See you on the Boulevard my darrrlinks.