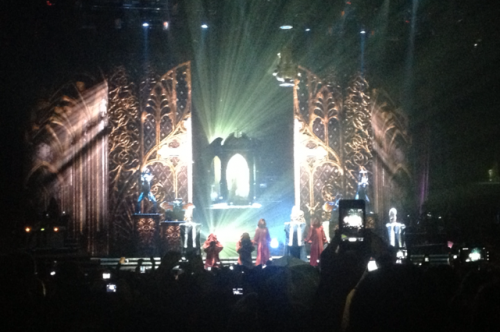 “Wake up Los Angeles!”  Madonna shouted into the crowd at the Staples Center arena this past Wednesday, Oct 10th.  And I was like, “Bitch!  Your ass is two and half hours late!  You got a lot of fuckin’ nerve!”

Yup, the MDNA concert ticket stub read 8pm, but the lights dimmed at around 10:35 and she made no apologies for it.  But of course, no apologies needed once shadows crept over the bleachers of the Staples Center.  The bitch took us to late-night mass.

It all started with a giant gold incense burner swinging back and forth before a towering glass cathedral.  Double-jointed demon-like creatures crawled out of dark crevasses and contorted while monks in red robes chanted the name Madonna.

Then the two-and-half hour wait was over; the crowd went nuts when M’s silhouette floated over the stage inside a little altar-like glass jewelry display case/cage that one would find in a church. The Queen stepped out wearing a gold crown with a semi-automatic weapon slung over her shoulder.  The Cathedral glass shattered into loud tiny bits, the monks opened their robes to reveal shirtless queens in black tights and high-heeled boots. Madonna jumped into the first number Girl Gone Wild and it was on— SACRILEGE!!!  I LOVE IT!!!

I’m not gonna give you a blow-by-blow detailed account, but I will tell you that the first part of the show was pretty tough. I’ve seen endless amateur video footage and found the opening numbers dumb and gratuitously violent—however watching the murder and mayhem go down live gave me a semi.

She channeled the sex-ploitation movie Faster Pussycat Kill, Kill for the gun-luvin’ song Revolver, which was followed by blood, brains, guts and gore galore for Bang Bang.  A kidnapping terrorist torture-type plot took place for Papa Don’t Preach, and she walked a tight rope with some Voodoo/Santeria craziness in the background that was very Marilyn Manson for the song Hung Up.  Then of course, there was the inevitable guitar moment for I Don’t Give a (Fuck).

“Fierce!” The gay next to me exclaimed.  And I concur.  M is pretty fierce when she channels the dark side.

I reckon I’m a little bias, but the MDNA tour is quite a spectacle.  The entire production was straight up dope!  I loved the mash-up of Express Yourself and Lady Caca’s Born This Way, should there be any doubts in their similarities.  We got a drum line suspended from the ceiling, cute little Rocco gave us break dancing moves and there was a shitload of shirtless dancers.

The action was non-stop with a few sit-down moments for songs like Masterpiece (the W.E. DVD was for sale in the lobby) and that horrible slow rendition of Like a Virgin with an equally horrible whiny version of Love Spent that was recently added to the set list—“Hold me like your money.  Tell me that you love me.  Spend your love on me.  Spend your love on me…” No offense to my friend Stanky who happens to love that song, but really M?

Musically, it was kind of all over the place in terms of song selection.  I genuinely enjoy MDNA, so I wouldn’t have minded hearing a live versions of the entire album, but this was supposed to be a musical journey from darkness to light. Therefore, not sure why I’m a Sinner was so light and fluffy and sooo Indian (that’s Indian with a dot).

I also wasn’t too fond of the live version of Turn Up the Radio, which could have been a dance opportunity, instead of the rock guitar moment we saw on stage. I thought the River Dancing for Open Your Heart was cute, though some of my friends hated it. And of course no M concert is complete without M playing a lesbian–this time for Candy Shop. A spruced up version Vogue delivered as always and she brought the house down with Like a Prayer (everyone stood up and sang).  Ending the show with Celebration seemed appropriate enough, since she’s never done it live.

She was the most engaging I have ever seen her be at a show this past Wednesday, but she also let us HAVE it at one point with a lecture that is now part of the show.  She pointed out that somebody was smoking the Devil weed. “I hate the Devil weed.  It’s bad for my throat,” she half-joked. Then she called us Angelinos boring and jaded. She mentioned some of the crazy shit she’s seen overseas and how we should not take our freedoms for granted. She reiterated her support of Pussy Riot and she mentioned the little girl named Malala Yousafzai, who was shot in the neck by the Taliban.

“The Taliban stopped her bus and shot her for writing a blog about wanting to go to school. Do you understand the sickness and absurdity of this? Do you recognize how lucky you are?” She yelled into the mic. She told us to take responsibility and vote and that we  need to care for the person standing next to us and not to take our freedoms for granted. I was like, give me a fucking break, but again, all was forgiven when she busted out with an oldie, but goody–this time it was Holiday, which was seriously the highlight of my entire night. It’s not a part of the setlist. I knew she had done it a few times before, so my fingers were crossed.  And she delivered. 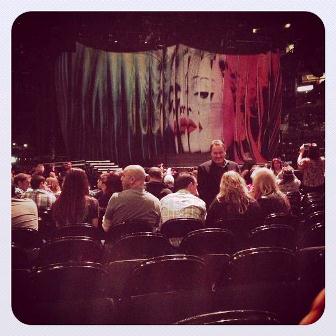 Did I mention I landed floor seats?  Row 12, section 4, which is 12 rows away from the tip of the catwalk.  Pretty phenomenal seats.  I got them for the ticket price. Some girl in New York couldn’t make it. She just wanted to break even, but let’s not EVEN get into the face value of a Madonna floor seat. The price left me feeling love spent–no fucking joke.

Anyway, the seats were great, but the floor experience was not at all what it was cracked up to be.  Yeah, M was super close, you could see her eyes look out into a dark sea of floating mediocre heads. But whenever she reached the tip of the catwalk, the queens all around me raised their arms to take crappy photos with their fucking smart phones. It was like trying to watch a movie, with people texting. So fucking annoying. We pretty much have seen every angle of the tour at this point via fan photos and youtube, but every single bitch on that floor had to walk away with their own memento; their own piece of M and try to capture that moment that could grace the homepage of Madonnalicious.com.

Most of the queens were so caught up on trying to get their shot that they barely watched the show.  I admit I also tried to take some photos at first for this here hiss fit, but the moment I realized my IPhone pushed her back a distance and my photos were shit, I gave it a rest and tried to take everything in live. 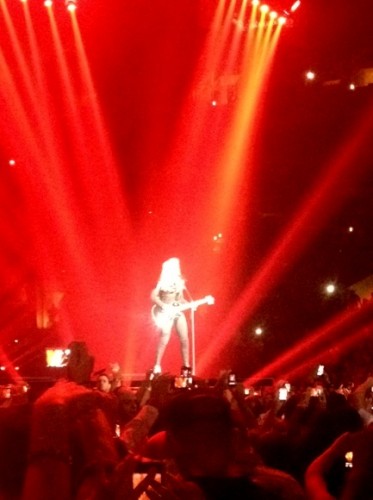 You also miss a lot watching the show from the floor. How do I know this, you ask?  Let’s just say my ass was at Staples Center AGAIN for the second Los Angeles MDNA concert the following night (gulp).  Give an alcoholic a good time and one time is simply not enough. I was on Ebay all day refreshing my search for Thursday night tickets—but WAIT, I can explain: My partner Kev had never been to a Madonna show ya see?  M just celebrated a 30-year career and he’s never seen her live?  I’m sorry, but I can’t be in that kind of relationship.  I also felt guilty that I went to the first show without him (gulp).

That Thursday, I was banking on shit happening and people not being able to attend the concert.  And sure enough, my search paid off. A woman was unable to get a babysitter, so she and her husband were assed out. Two premier MDNA e-tickets for the price of one via Ebay. Their loss put us on the section just to the side of the stage.  Seriously the best seats in the house.  I couldn’t see Madonna’s eyeballs, but I could see everything else.  And I got to see it with the man I love (again no offense to Stanky), who was excited and blown away by the enormity of it all. “It’s one of the most amazing things I have ever seen on stage.” Kev told me after.

Madonna wasn’t as chatty on the second show, but she still called us jaded and lectured us about the problems of the world.  She also called us mutherfuckers…like a lot.  Then she did Holiday for a second night and I couldn’t be happier.  She could tell me to fuck off all she wanted.  I crossed my fingers for Everybody, since she mentioned it during her speech about it being 30 years old, but I reckon lightning can strike twice, just not on the same coconut.

I especially laughed my ass off on the second night when I ran into some of the same bitches from the night before. I saw Miss Spencer Torres walking past me with an accomplished look on his face. I tapped him on the shoulder and I was like, “Seriously bitch? Seriously?”  We both howled and exchanged stories on how we got premier seats at the last minute. We got ’em on Ebay. 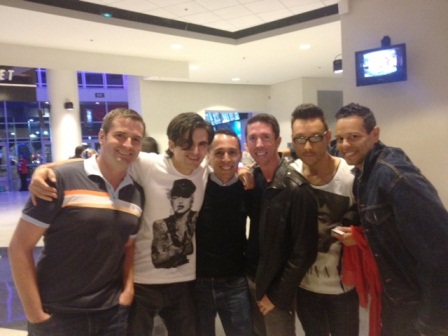 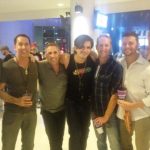 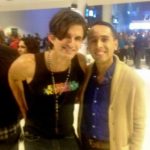 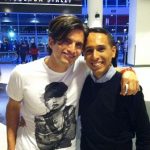 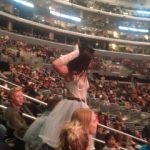 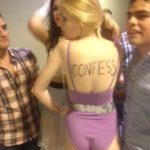 Truly a happy moment.  Yeah that moment came with a hefty price, not to mention a lot of stress–especially when you do it for two nights in a row (how does that bitch DO IT!!!???).  There was the time frame. Was she gonna be late again? Should we show up early? There was the parking situation. There was the stress of us possibly holding fake tickets and being turned away at the door. There was the possibility of actually getting shitty seats–all that stress times two days in a row.

Yep, she was late again, and we showed up early only to wait for two-and-a-half hours. The show ended close to midnight both nights. I was seriously in a Madonna coma for the next couple of days. But seriously… so fucking worth it. I’m telling you, if MDNA is coming to your town, you don’t want to miss this show.

There’s only one queen.  And that’s Madonna.

HAPPY COMING OUT DAY!!! THE – I HATE PROJECT RUNWAY – BLOG