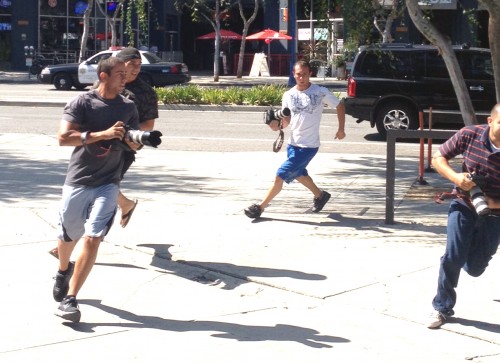 There was no denying the sudden shift in the air that hot and sticky Sunday afternoon.  I heard shouts.  People stopped on the street and heads turned.  Then people started running towards some sort of commotion on the corner of Santa Monica Blvd and Huntley Dr in the heart of West Hollywood.  Something was up.  Was it a car wreck?  Had someone been murdered?  I could not help but peer over the wall of a parking lot to see what all the fuss was about.  Then I saw the giant camera lenses pointed at a skinny blond chic who was trying to feed her parking meter.  The beast that we all know as Paparazzi was feeding on a poor helpless celebrity in the heart of West Hollywood.  Just another typical day.  Not a big deal. 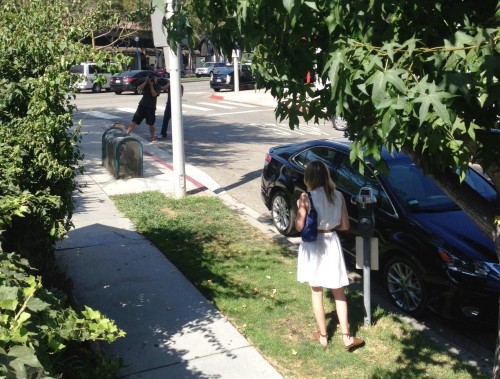 Not sure if you’ve ever experienced or witnessed it firsthand, but when paparazzi collides with celebrity outside of a red carpet, the scene can be animalistic.  Watching that shit go down live on the street is about as glamorous as being caught in the middle of a feeding frenzy where a bunch of hungry lions outnumber a baby zebra on the Nat Geo channel.  The energy is fucked up.  You can’t help but feel contempt for the type of men that choose this sort of work as their field.  It takes a certain kind of asshole.  These guys are aggressive, they are solitary, they tend to be foreign, they look dirty and for the most part, they’re are u.g.l.y.  They get down on their knees, they run to get ahead, they scream, they elbow each other out of the way and they creep for their daily bread with those heavy cameras on hand, ready to aim and fire.  You read about that shit all the time, but catching that shit in person off the sidelines can be disturbing like all hell; I can’t imagine what that must be like when you’re the one being hunted.  Celebrity sucks. 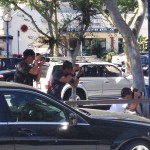 Disgusting as it may seem, you can’t help but get caught up in the moment and feel the adrenaline rush.  People don’t want to be rude; this is Los Angeles, so most people want to be above it all, but depending on the celebrity caliber–no matter how jaded–most people can’t resist from busting out their smart phones and snapping pictures and then rushing to their Facebook account.  It’s not every day that you see stars like Jake Gyllenhaal going for a hike down Runyon Canyon, Tobey Maguire having lunch at the Newsroom, or Kirsten Dunst working out at the 24-Hour Fitness in Hollywood (those are my own personal celeb sightings that come to mind off hand; I didn’t bother to take photos)–However, when you live where I live, chances are, you’ll run into Jake Gyllenhaal again at the Body Factory in Weho, or see Rip Taylor crossing some random street, or witness a drunken Andy Dick at Norms at 2am.

So what big name was on the menu in the heart of West Hollywood that hot and sticky Sunday afternoon that had everybody gawking?  It was supermodel and skele queen of heroin chic Kate Moss, who was surprisingly small in stature for someone in her field.  What has she done lately?  And who decides who’s on the menu for the day?  I tried to elbow a paparazzo out of my way, so I could chip at a piece of her soul for my very own, but she was not giving you much face that day.  The woman was just trying to get her nails done at a place that’s frequented by huge stars like Gwen Stefani and Bruce Vilanch (grin).  For all the simplicity of her getup, she looked like a star. 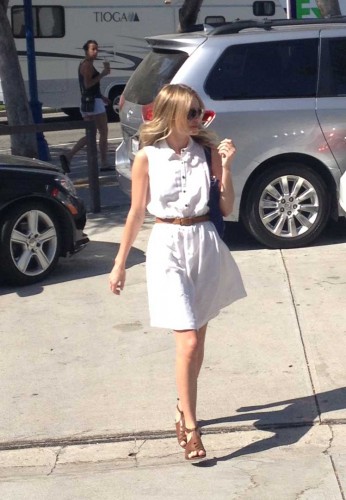 On the flip side, I happened to catch Miss Moss exit the nail salon an hour or so later.  And there wasn’t a single camera lens in sight.  The Beast had moved on, probably feeding on a meatier carcass, which is the nature of said beast.  Sometimes a bitch can’t get her nails did without people screaming and tripping on themselves to get a piece of you.  Other times a bitch can’t get someone to open a car door for her, nor can a bitch get shot in this town to do a bitch a favor.