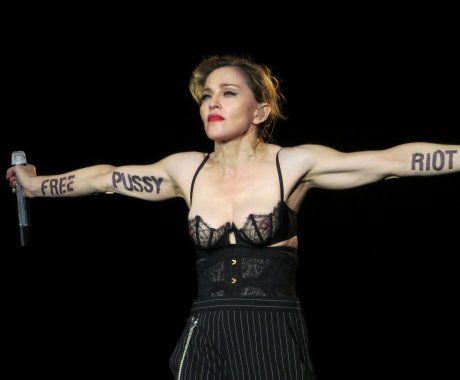 Next Tuesday, August 28, 2012, Madonna’s MDNA Tour 2012 hits US territory at the Philadelphia Wells Fargo Center with her arsenal of guns, cheer leading batons, boys in spiky stiletto heels, crucifixes and politically incorrect video montages that are bound spark a shit storm in the states.  What details will she change for the US?  I’m hoping for a complete wardrobe change.  I’m hoping she’ll adjust the message to fit the US political climate (with a picture of Romney with a $ on his forehead).  I’m hoping she’ll continue to show us her 50+ tits.

In Europe, they got mad when she flashed her right boob in Istanbul and then flashed her left boob in Paris where she also dropped her pants to flash her ass.  They got mad when she scratched a Swastika on the forehead of French National Front leader Marine Le Pen, who responded with threats of a lawsuit for defamation of character (no matter; the world is watching La Le Pen now, so she will have to tread her policies with caution moving forward…which I’m guessing was the whole point).  They got mad when she walked on stage with a guns and blasted caps on other dancers wearing ski masks with gory blood-splatter all over the screens.  And they didn’t take too kindly to monks ripping off their red robes to reveal shirtless queens in black tights and high heels.

She especially pissed off the Russian Republic when she condemned the conviction of the punk band Pussy Riot who were arrested for performing a punk prayer in front of a church — “I protest the conviction and sentencing of Pussy Riot to a penal colony for two years for a 40 second performance extolling their political opinions. Even if one disagrees with the location or how they chose to express themselves, the sentence is too harsh and in fact is inhumane. I call on all those who love freedom to condemn this unjust punishment. I urge artists around the world to speak up in protest against this travesty. They’ve spent enough time in jail. I call on ALL of Russia to let Pussy Riot go free.” Madonna  also donned a balaclava in solidarity with the protest punk band, which only angered Russian authorities further.

I didn’t think she would actually go there, but she went there and she was all balls out when she called for the love and appreciation of the gay community at a concert in St. Petersburg, where it is illegal to promote “homosexual propaganda.”  She gave out pink jelly bands at the concert, she showed gays kissing during her “Nobody Knows Me” video montage and she busted out a gay rainbow flag on stage and said a speech about human dignity, love and respect for the gay community.  She was threatened with violence, she is facing fines, she was called a slut by Russian authorities via Twitter, and she is being sued for 10 million dollars by anti-gay groups who say she insulted their feelings with her pro-gay message— “‘Maybe someone does not see the link but after Madonna’s concert maybe some boy becomes gay, some girl becomes lesbian, fewer children are born as a result and this big country cannot defend its borders” said Alexei Kolotkov, one of the activists filing the suit.  “For me it causes moral suffering.” Kolotkov added [insert LOL here]. 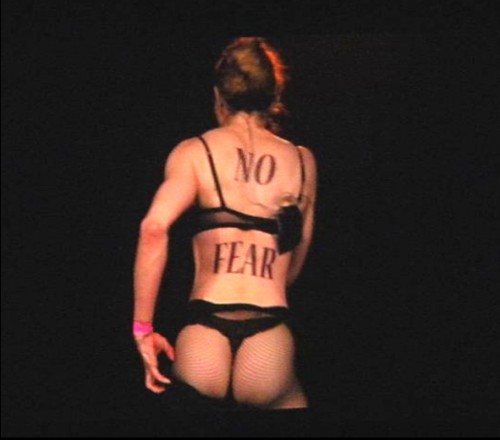