WHEN YOU’RE YOUNG BUT YOU’RE OLD 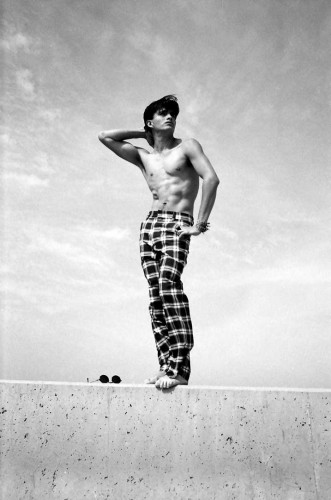 OH EM JEE!  I totally found a sheet of black & white film strip while I was rummaging through my apartment looking for my lost wallet the other day.  I’m talkin’ about the old school kind of negatives that you have to ship away to some special developing studio, cuz they don’t make photo labs like they used to.

Do you remember those little Kodak photo huts that used to be in every little strip mall in Los Angeles?

I believe the year was 92 (OH-EM-JEE, that was 20 years ago).  I was still in my late teens (moving along), fresh out of the closet and in my second semester at El Camino College.  Student photographers and art students were always looking for subjects to draw, paint or photograph for their school projects.  Fliers went up seeking models.  I always wondered who answered these sort of ads.  Then one day I ran into a post from a would-be photog who was seeking to capture people with “interesting looks.”  I found it interesting that he used the word “interesting,” because to me, interesting has always been another word for ugly or the opposite of traditionally beautiful.  You don’t hear pretty people get referred to as interesting looking–they get called pretty, pretty boring or pretty bland maybe, but NEVER interesting.  Nobody wants to be interesting-looking.

It’s like, what would Madonna do, right, so of course, I responded to this ad because I thought my look was extremely interesting in those early years.

I barely remember what the photog looked like; he was this white stringy dude, with long greasy hair that was parted in the middle.  He was just this hetero guy trying to get a grade for his photography 101 class.  I couldn’t tell you his name, which is unfortunate, because I can’t give him proper photo credit (I believe his name was something like Bruce Weber, or Steven Meisel, but I’m not sure—cough, cough.)  He seemed to find me interesting looking as well…(sigh).

I remember we hit up vintage thrifts stores back in the day when thrift stores were reserved for poor people and freaky kids that liked to walk around wearing different period pieces and call themselves MODS.  He bought these horrible–I’m talkin’ HORRIBLE green plaid bell bottom pants for like $2.00, which he insisted would transfer well to black and white film.  I wasn’t so sure about bell bottoms.  The 70’s had not regurgitated yet and there was nothing more ugly than plaid pants.

We hit up an empty off ramp from the 405 freeway by Century Blvd, near LAX, which was being rebuilt, or expanded at the time.  I was decked in all black with a cigarette in my mouth for some color shots–no hair or make up crew; I didn’t need it at the time.  Then I slipped into those ugly bell bottoms that had the bottom seams hacked off because they were too long for me.   I felt so uncomfortable, but this was art I told myself.  I tried to be a good sport and I hung dangerously close to the ledge of that empty freeway bridge.  I wanted to draw attention away from my face, so of course I removed my top (shirtless douchery was born).  He kept his distance and snapped away while I tried to own the plaid pants. 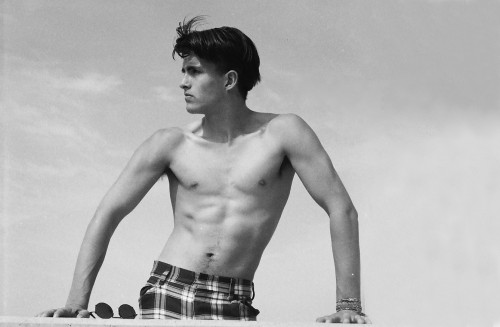 I remember being HORRIFIED by the bell bottom results.  All I saw was Mr fucking Furley from Three’s Company in those pants.  I looked old.   And the pants rode up so high up my waist that I decided I also looked fat.  I was so upset by these photos that I demanded to keep the entire role of film.  I vowed to destroy these photos.  No one would ever see these.  EVER!!!  The guy thought I was crazy, but he got his shots, got the grade and he let me keep the black & white photos (he kept the color film).

He also let me keep the bell bottoms (sigh).

Anyway, 20 years later I find these photos and I have a whole different reaction…TOO OLD?  TOO FAT?  Are you fucking kidding me!!!???  WHAT THE FUCK WAS WRONG WITH ME!!!???  We get some peculiar ideas about ourselves when we’re young and dumb and we don’t know any better, don’t we?  It’s like looking into whole different dimension.

I’m so happy I didn’t destroy these photos.  I showed them to my friend Judd and of course the first words out of his mouth were, “Kewt style!  I love the pants…” (sigh) 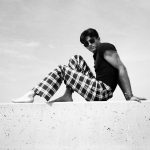 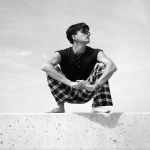 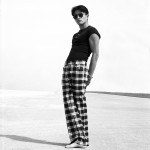 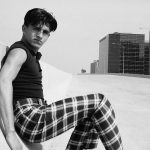 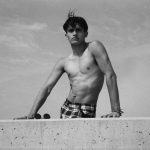 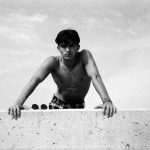 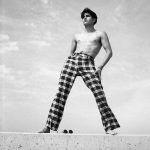 We all look at younger versions of ourselves and think, “If I knew then what I know now…” and of course, I wish I knew then what I know now; I recognize that the guy in these photos does not exit anymore, but I still look at this skinny, insecure little bitch and I really regret not being a little kinder to him.  I wish I had let him off the hook more often and had been more forgiving.  He really didn’t suck.  Much.

If I ran into him today, I’d say, “Yeah, you’re a bitch, but you’re doing the best that you can with what you got. ”

I guess all we can do is live and learn–hopefully to love ourselves  a little more.

Cuz if you don’t love yourself…

THESE ARE MEDS… DANCING DICKS ON A DISCO STICK