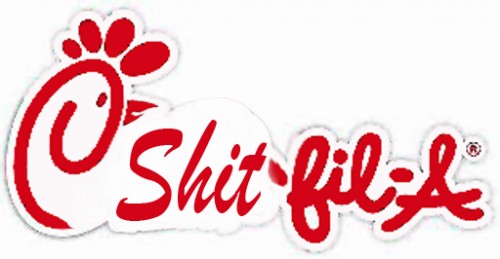 While it is no secret that Chick-fil-A has funneled a shit load of money in support of anti-gay Christian organizations, it’s still bottom lip-dropping when the president of Chick-fil-A, Dan Cathy (son of company founder S. Truett Cathy) goes on record describing his franchise’s “support of traditional family.”

“Well, guilty as charged,” he told the Baptist Press. “We are very much supportive of the family — the biblical definition of the family unit. We are a family-owned business, a family-led business, and we are married to our first wives. We give God thanks for that…we know that it might not be popular with everyone, but thank the Lord, we live in a country where we can share our values and operate on biblical principles.”

I don’t understand who he is referring to when he says “we” are a family-led business operating on biblical principles.  Are the “we,” 10 people sitting in the board of directors?  Are they 100?  Is he referring to every individual who has the word manager/supervisor on their name tag at a Shit-fil-A across the country?  Are the persons in charge of operations at the Shit-fil-A on Sunset and Highland in Hollywood leading their lives according to the bible?  What about the “we” in their staff that happen to be gay and show up to work everyday for a slice of a small paycheck?  Do they not have families?  What about the “we” who are gay that have purchased a piece of their shit fried chicken and contributed to the growth of their empire?  Have “we” no family values?  Have “we” no family unit?

And by “we,” I don’t mean “me,” because I have never eaten at a Shit-fil-A.  I don’t really go out of my way to eat fried shit food.  I may not always eat the healthiest when it comes to cookies, chocolate and candy, but for the most part, I try to watch what I eat.  The last time I had a Big Mac was a good 6 years ago.  That shit was so nasty, I stuck my finger down my throat and forced myself to hork.  Sneaking into a Target after their anti-gay fiasco because I desperately needed black booty socks is one thing, but I vow NEVER to so much as flick a penny in the direction of a Shit-Fil-A.  EVER!!!

I find it interesting how the Shit-fil-A on Sunset and Highland is only walking distance from the West Hollywood Gateway.  I remember when a lady from El Coyote Mexican restaurant donated a measly $100 to a pro prop 8 organization.  They let my girl HAVE IT!!!  El Coyote faced a gay shit storm at their doorstep so bad that it affects them to this day on their cheap margarita nights (it used to be a gay favorite).  Yet, according to Equality Matters, Chick-fil-A has donated close to $2 million to anti-gay groups throughout 2010.  These organizations include Marriage & Family Foundation ($1,188,380), Exodus International ($1,000) and the Family Research Council (another $1,000).

“I think we are inviting God’s judgment on our nation when we shake our fist at Him and say ‘we know better than you as to what constitutes a marriage'” Dan Cathy told The Ken Coleman show. “And I pray God’s mercy on our generation that has such a prideful, arrogant attitude to think that we have the audacity to define what marriage is about.”

I pray that God have mercy on the dark forces that run Chick-fil-A.  You’re in the business of making a fried chicken sandwich for fuck’s sake.  Let’s talk about audacity.  Has the arrogance and pride from the success of your empire gone so far up your ass and to your head that you feel you can afford to offend those who work for you and also extract a good portion of your clientele?

To Dan Cathy and all his like-minded associates, I want to shake a fist at them and hand ’em an apron.   I say fry up some chicken bitches.