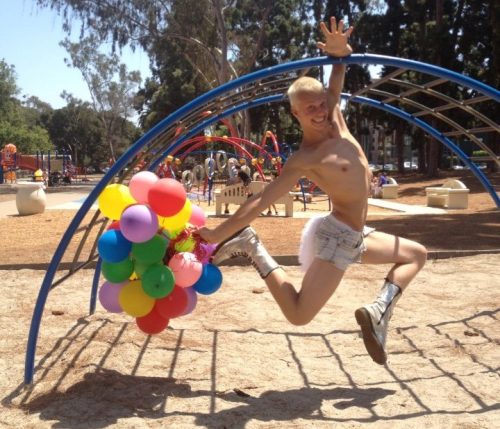 Comparing San Diego Pride to West Hollywood Pride is like comparing town and country to something oh so very contemporary — you can’t really compare the two, because it appears like the two are hell bent on being the polar opposite of each other—or so I learned when I joined my friends Ruben, Jesse and Mike and then met up with SD local Roger for a little taste of San Diego Pride this past Sunday.  I was ready to do it all–the people, the parade, and the festival on account of I attended the WeHo pride parade this year, but I missed the festival because I had to work.

I totally took Sunday off from work because I wanted to do it right this time…but something went terribly wrong from the get go.  It turned out pride in San Diego is butt-fuck-backwards.  Somebody pissed on my parade when they decided to have the gay parade on Saturday instead of Sunday (ay, pos nobody told me).  What that means is that the nut had already been busted by the time we got to the festival that Sunday afternoon.  We faced this event the moment after the climax–right after what’s done is done and you’re fishing for a crusty cum rag.  I’m talkin’ about all the hotties were either recovering from the Circuit Daze after-hours party the previous night, or they were in the midst of a disco nap to prepare for the Zoo Party later that evening.  We walked into that festival and of course, all we could see were lesbians with baby strollers and we walked past some empty dance tents.  There was a random cutie here and there, but for the most part, the money shot was spent.

I’m pretty sure, I have only done SD pride once a good 7 years ago, but you know how that goes–the whole thing is a big blur on account of my mind was altered.  I remember taking my sister Hazel with me and all the lesbies were on her ass relentlessly trying to get her digits.  She had to pretend her lady friend was her lover, and even then these lesbies didn’t give one. I remember following the parade to the festival.  I remember beer gardens.  And the rest I don’t remember, so that shit never happened. 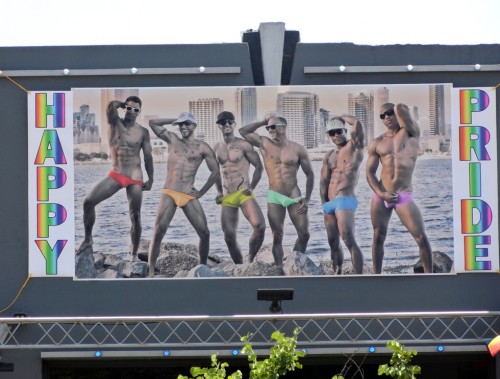 When I say SD pride was butt-fuck-backwards, I’m talkin’ about busted-from-the-inside-out backwards.  Where Weho Pride buries its food courts to the far back of the festival so that nobody can see a hungry skele-queer going down on a gyro…at SD Pride, the first thing you see and smell is festival food at the main entrance.  I was peer-pressured into breaking a carnal gay rule and eating a jalapeno turkey sausage in a baguette with some melted cheese right out in public where everyone could see me.  That means I was sucking on a sausage while people hit me up with tag lines like, “Hey can I talk to you for a sec? Do you care about world hunger?”—Everyone has their cause, so it was impossible to escape these eager young folks who wanted to know if you gave a shit about equality, human rights, the planet, or the unborn puppies being murdered in Timbuktu (or is that East Bum Fuck Egypt?)—I care.  I really do.  I swear I’m a good person, but get the FUCK out of my face before I hit you with this half-eaten sausage.  Yeah, umm…OK, thank youuuu.

There were a few highlights.  The fetish tent offered a light introduction to a good spanking.  Some guys walked around in their underwear.  I witness a woman dressed in a wedding gown that did not fit her too well and made no kind of sense, since she was all real woman.  There was a woman dressed up as Michael Jackson circa the BAD years.  I also got suckered into buying an expensive tank top from a set of hot twins who offered a free twin sandwich with purchase.  The sign was written in such a way that it looked like they offered a free tuna sandwich (?).  The twin sandwich was a photo op with you sandwiched between a these twins.  The guys were totally straight, or least one of them was, and they were both real good with the hustle and bustle (a tuna sandwich sounds real good in retrospect).  I also got to harass people with my postcards to promote my blog by the media booth.  I was like, “Hey can I talk to you for a second?  Do you care about a bitch on hiss fit?” 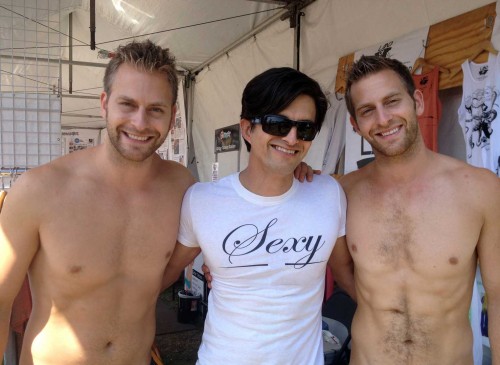 In all fairness, I gotz to give SD Pride props for braving some carnival rides in the festival.  People have been campaigning for a carnival at WeHo pride for years.  I like that they separated the drunks from the non-drunks with a drinking corral.  I also hear the event was hell-a-crazy-crowded on Saturday with plenty of active duty servicemen in full uniforms who actually marched as openly gay at the parade for the very first time in US history.  I also noticed that there was a lot of national support from large corporations like Ralphs, Johnson & Johnson and AT&T to name only a few.  Of course, there were the baby strollers and the large families with la abuelita (granny) being led around in the festival.  And regardless of the butt-backwardness, Ruben, Roger, Jesse and Mike were a shitload of fun.  I don’t know how, or why; we didn’t do much, but walk around–we didn’t even dance, but we shot the shit and had plenty of laughs—“I love the papis with the big booties and small pipis,” one of them exclaimed at one point. 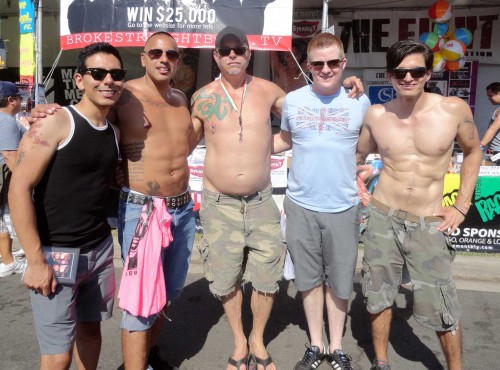 SD pride didn’t suck.  It was just different…that’s all.

The WeHo pride parade and SD festival should add up to one full pride experience, but then I hear Orange County has a pride coming up pretty soon.  I hear it is the size of a college campus.  And that it has quite the Asian invasion.  I have never been.  At least I don’t think I have–it’s hard to tell.  I may hit that pride up and for a little writing material.

Anyway, below are some pics–mostly of me with my top off.

The pickings were slim, but enjoy. 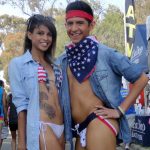 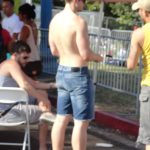 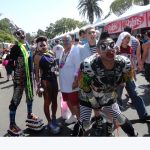 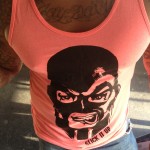 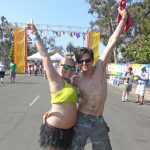