I GOT REGGAE IN MY HEAD 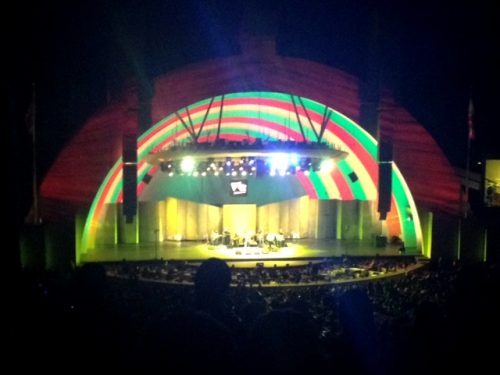 Last night I ended up at the Hollywood Bowl to catch Reggae Night – Tuff Gong with Ziggy Marley and other Reggae legends that I know nuthin’ about.  My boo had a work outing and this is the venue that was chosen (it was either Reggae or the Grease Sing-Along the night before–I don’t know what’s worse).  Sooo like a proper partner I had to put on an eager smile.

We showed up at the Bowl with these matching prim picnic baskets dangling from our forearms (checkered table cloth and all) courtesy of Dough Boys in Los Angeles.  Other people showed up with a bowl or an apple bong and a head-full of dirty dreadlocks.  I saw one guy point at us say something like “dang, those two straight up brought picnic baskets mon.”  I felt like Little Red Riding Hood going to Granny’s house, but that’s OK, cuz we would be having a feast while this “mon” ate a hot dog and popcorn.

Of course, it didn’t register that we would be engulfed by a big puff of skunky smoke the instant that we got to the bowl.  I mean people were high.  They had glassy China man eyes and were swaying back and forth to the groovy sounds that is all Reggae.

Getting high from secondhand smoke is what sobers call a “freebie,” which would’ve been cool, but pot has never been my drug of choice.  I’m not into downers and I hate how I have to choke on the smoke to get a real hit.

“I think I have one day of Marijuana” I texted a friend. “But I still have 5.5 years clean and sober”  I was referring to people who say they are sober but they still light a joint.  These people are funny.

Ziggy was great with his messages about All You Need is Love and Love is My Religion.  It’s hard to hate Reggae because it’s so damn relaxing.  Music is music, and if the music is good, you’re bound to enjoy it.  And the music was good.

Reggae legend Maxi Priest didn’t make it.  I’m not sure who this Maxi person is, but they announced that he had “Visa issues” in the UK.  I imagine that was code for they found a pound of dry green leaves on him and they took his Visa away at the terminal.

Toots and the Maytals came on after Ziggy and Toots was like watching the Liza Minnelli of Reggae.  The fucker was FUCKED UP!!!  He couldn’t hold the mic up.  The mic was on his belly and all you herd was a muffled mess.  You couldn’t understand a word he was saying.  I thought he was going to fall into the orchestra pit.  He made the two backup dancers do all the work.  I felt bad for these two singers.  They did their best to keep the momentum, singing their arms from side to side like the Ikettes.

The crowd started getting real ready towards the end, once the beer and the pot set it.  A guy behind me was so loud and belligerent, talkin’ about “Hey ladies.  I’m single.  I’m handsome.  So what do you say?”  And he was handsome in a dumb gay-but-straight-Tosh-O sort of way.  And of course he was single.  No doubt there.

Anyway, I thought it was gonna suck, but as far as work functions go, it didn’t.  Much.

Dumb straight guys gave us the perfect excuse to make an exit.

HAPPY FRIDAY THE 13TH MADONNA – TURN OFF THE VIDEO