…bitches bustin’ out in public wearing hot pink because they were told it’s the new  black. 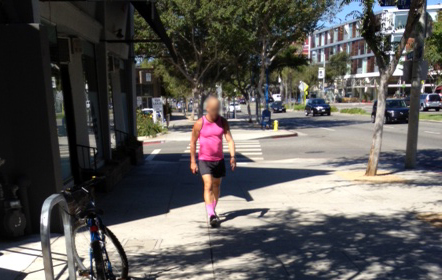 On the one hand, people should wear whatever the fuck they want to wear and screw what others think—I’m all for men who wear pink to show that they’re comfortable with their masculinity.

That out of the way–on the other hand…grown men who hit the streets wearing attention-seeking hot pink, should be hog-tied and beating with with a broken broomstick–especially if these guy are overgrown in both years and in size.

According to The Gap ads, 80’s neon colors are back in style.  That’s fine.  I am a strong supporter of age inappropriateness, but I seriously could not tell you the last time I stepped into a Gap (The Gap:  Great TV ads.  Gross clothes.  The end.)

I get that pink doesn’t mean what it used to mean.  “Real men wear pink” to raise breast cancer awareness in the month of October and then these men stop shaving in the month of November to support colon cancer.  But we’re in the beginning of summer and I’m not aware of any form of cancer on the streets of West Hollywood.  I see a speck of hot pink walking down the street and I expect to see Angelene The Billboard Queen pushing her powdered tits to peddle her unflattering white cotton tees for 20-bucks a pop from the trunk of her hot pink Corvette.  Instead of Angelene, I’m getting these queens decked in bright pink, like it’s supposed to hold some form of irony.

The guy in these pictures is the third guy I saw walking around WeHo this morning looking like something Hello Kitty puked up (Goodbye Kitty).  Some people like to sashay to the beat of their own drum.  That march must be a lonely one, because clearly these bitches don’t have any kind real bitches who got their backs to tell them what’s what.

I hate to say it, but sashay away. 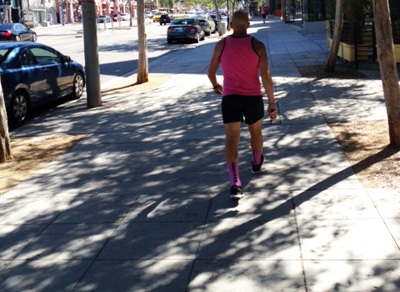 I HEART ART YOU GOTTAH HAVE FRIENDS