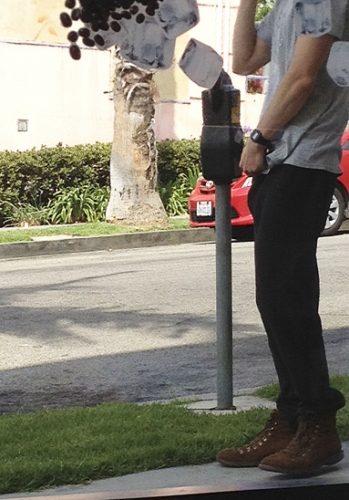 This super skinny guy walked into The Big Gay Starfucks this morning totally free balling in some beat up sweats that left nothing to the imagination where his big business was concerned.  The guy is clearly a fucking tripod and he’s not ashamed to let you know it.  He was just parading that thingaling while he paced on the phone back in forth on the sidewalk, making all the queens inside The Bucks scratch their necks nervously.

Public display of junkage are a common thing in the streets of WeHo.  Add a big package to a pair of barely there mesh shorts from Andrew Christian and these guys are good to go walking around town nonchalantly like they don’t know their sausage is bouncing all over the place and disturbing people.  Some of these guys will even don a cock ring to make their peckers really pop, but those are always so damn obvious. 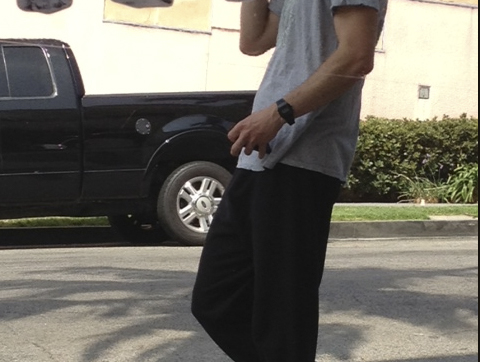 I totally trip out with the guys that dare you to look down there and then smack their lips and roll their eyes inside their heads to perpetrate annoyance when they catch you looking as if they don’t want you checking out their junk.  But we all know that’s a lie.  They want you to look.  Why else would they forget their underwear?  It’s very similar to a woman that walks around with her boobs hanging out and feels disrespected because you keep looking at her tits—I’m gay, I don’t even like tits, but they’re there!  So I look.  The same goes for these free-balling guys.  I look.  I’d say, put that shit away, tie that shit to your leg, harness it, tuck it, or jam it between your cheeks, but I can’t shit ya…(long pause)…I like to look.

I can’t say I don’t understand these guys.  I used to be notorious for going commando.  I was all about bulge, bush and butt crack.  And yeah, of course I wanted you to look.  But those were the trashy days before I got sober when I didn’t feel I had much else to offer, but bulge, bush and butt crack.  Today I wear underwear thankyouverymuch; I make sure that it’s clean and I even make my bed, which is one of those sober fucking miracles.

Anyway, I did my very best to get a picture of this guy’s bulge in all his free-balling glory.  I didn’t care that he’s all bones and wearing sweats and boots.  I was snapping away and THEN of course, I realized he was looking right at me.  BUSTED!  He shook his head and hid behind a wall trying to cover his obscene pickle. 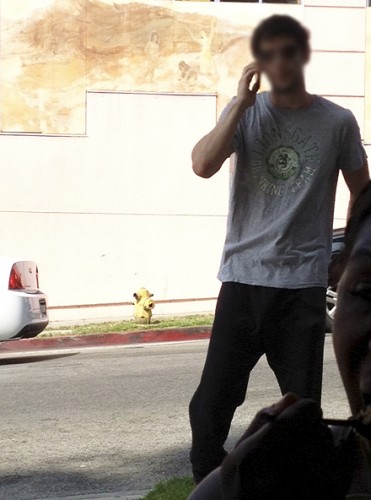 Too late.  We all know that it’s cut and it hangs straight up to the head up.