DANCING DICKS ON A DISCO STICK 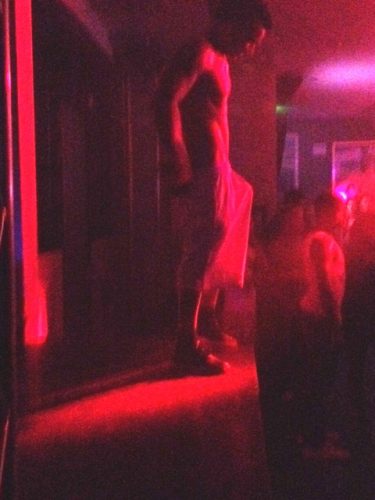 I went out dancing this past Saturday night.  My bitch David M got me to dust off the beat up hooker heels and hit the town to shake some sweat off the boo-tay.  He’s newly single and itching to umm…mingle (I know, lame, but what else rhymes with single?).  I can’t tell you the last time I hit up a dance floor.  I’m thinking it’s been well over a year (gulp).   In WeHo gay terms, I might as well be a dry crusty carcass hidden under a boulder.

I gotz to be honest with you, the night promised to be a miserable one.  A whole bunch of sobers got all excited about going out that night and of course, a whole bunch of sobers flaked at the last minute.  Only four of us braved the night.  I could NOT think if anything less fun than bar-hopping last minute style in the heart of West Hollywood.  I’m sooo out of the loop when it comes to that type of scene and I seriously can’t shit ya…I kinda like it that way.  I used to live for it; I knew no other way around it.  Every weekend I was on the prowl, unable to stay indoors on a Friday night because I always felt like I was missing out on something.  That something added up to Much Ado About Nothing.  Now I know better and I’m forever grateful that there is life beyond it.

We were supposed to hop around town; maybe hit up The Abbey and then cap off the night at The Factory, but we were sooo uninspired that we never made it past Micky’s, the ONE club that everyone told us to stay away from.  We didn’t give a shit; all we needed was a dance floor and there was no cover charge.  I immediately ordered a Diet Coke with an embarrassed grin on my face.  The bartender (a Latino with a buzz cut tending bar by the main entrance) didn’t so much as a crack a smile.  I get that the bitch was tired from being on his feet and whatever (I don’t know his life), but smiling can be so effortless, especially when no matter how you slice your life, at the end of the night your ass is behind that bar with your tits exposed to survive on tips—SMILE YOU HUMORLESS BITCH!!!  I still tipped him $2.00 to show Them/The Others that I was not a cheap ass—I was not there for 10 minutes and already Them/The Others were judging me, what I was wearing and watching my every move.  Oh yeah, that was $5.00 for a squirt of diet coke on a plastic cup full of ice, so I could hold something in my hands while I stood around.  Ain’t that some shit?

The patio at Micky’s was miserable on account of the big puffs of  cigarette smoke—“You’re blowing smoke in my face,” I told this pretty dark-haired girl after the third insult. “Learn how to smoke,” I added.  I put two fingers on my lips and made a motion like I was blowing smoke to the sky.  Dumb twat.  City Hall should ban smoking in outdoor patios at the bars in West Hollywood on account of secondhand smoke kills innocent bystanders (OK, now I’m just starting shit…evil grin).

I get that I was seeing the nightlife scenery unfold before me with what they call a new pair of sober glasses, but I didn’t get the feeling that my fellow fagged ones were out to hook up for the night.  At least not in the traditional let’s-fuck sense of the words.  Dick used to the motivator to get out to the bars, but the energy was more friendly than flirty.  Guys kept their shirts on in the dance floor and there wasn’t much kissing happening in the kissing corner.  I guess if you’re single and itching to um…mingle, the clubz ain’t the place to do it.  People don’t make it past their computers to get their dick on nowadayz.  No big newsflash there, but I still marvel at how the shit ain’t the same.  And so it goes. 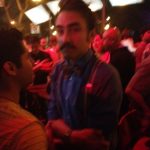 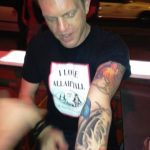 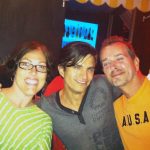 And speaking of dick…of course we have Micky’s claim to fame which are the vulgar Go-Go dancers with their obscene bloated dicks that look like they’re being propped straight up with a ruler.  These hung guys are about 5 feet-4 inches in stature with their arms up high and they don’t give dancing much of a go.  The go-go pole just stands there and they just stand there swinging their semi-erect meat sticks from side to side and up and down completely out of rhythm to a dance beat—not that it matters much to those that gather around like a bunch of blokes at an old school Peekaboo Carny Burlesque show.  Every time I look up at these big puffy penises, I think–“Is the circus in town?”  It’s more freak show than fantasy.  It’s like, what do you DO with that thing?  I wish I had my camera on me to capture the mesmerized looks on some faces in the audience, cuz my phone doesn’t do much justice in the darkness.   Alas…the catch 22 of offering trashy big-dicked go-go boys at your club is that you mostly draw a much-much older crowd, and THAT is how Micky’s get’s the Ick in Ickys. 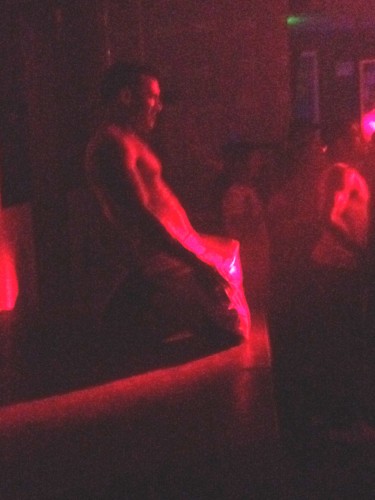 Anyway, we hit the dance floor and I can’t shit ya, I felt a little stiff at first.  I couldn’t get into it.  Then I noticed this tall fit older man–I’m talking about well into his fifties–getting into the groove in his flare jeans and not giving a flying fuck about Them/The Others.  I fucking L.O.V.E.D the way he moved.  The bitch could dance.  His younger Latino boyfriend, or boy toy for the night seemed to dig him also.  I wanted to capture this sex granny in all his disco dancing glory, but the flash on my phone was so bright, that there was no slick way around it.  Below is the best I could do. 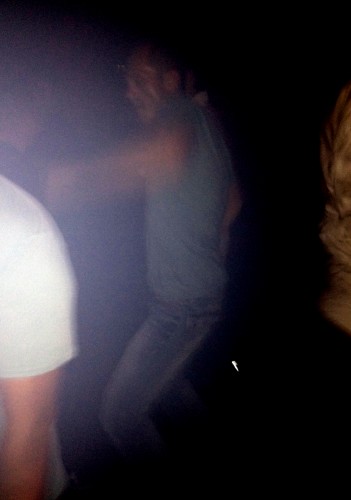 We ran into another group of sobers clutching their water bottles in the middle of the dance floor.  “Oh bitch…I’m sooo fucking drunk.” I leaned into one ear and pretended to slurr.  His eyes bulged out incredulously. “Nuh-uh…” He responded with morbid fascination.  I smiled at him, shook my head and kept dancing.  Sometimes I get to thinking that not drinking–EVER–is not normal.  But then I remember the way I used to drink and drug and I think–forget normal–that shit was full on fucking crazy.  Like it or not, for far too many, sobriety is part of the gay experience.  So I continue to stay sober.

We danced.  We took a break.  And we danced some more, until one of us (meaning me) said no more.  I can’t lie, the shit was fun once I was able to silence Them/The Others and get my ass into it.  It’s so easy to get back into it.  It could be like I never left.  It’s nice knowing that it’s there, but looking around at some familiar faces from the far past, some of these guys are still at it when they should seriously give it a rest. 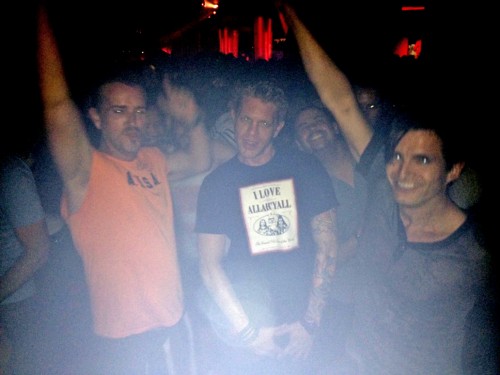 On the way home we walked past Club Eleven and noticed a sexy woman working her boo-tay for the open traffic on Santa Monica Blvd.  The bitch was giving us G0-Go boots and Go-Go moves from the word GO!  She was all womanly curves—a living testament that the shit ain’t what it was in WeHo no mo’.

The night ended the way many nights ended back in the day; I walked up my doorsteps home alone—only at this point it was mostly in the physical sense.  I don’t feel spiritually or emotionally…alone in the lonely sense of the word.

Before I sign off, I remember getting a letter from some random guy in response to a column I wrote about drinking, drugging and having a good time.  The guy said something along the lines of—“You seem to write a lot about partying.  Like the old standard goes, if that’s all there is.  Then let’s keep dancing.  If that’s all there is…”

I didn’t know the song at the time, but today I thank Allah, the Buddha and all the Saints up above that it is NOT all there is.

It is what it is.