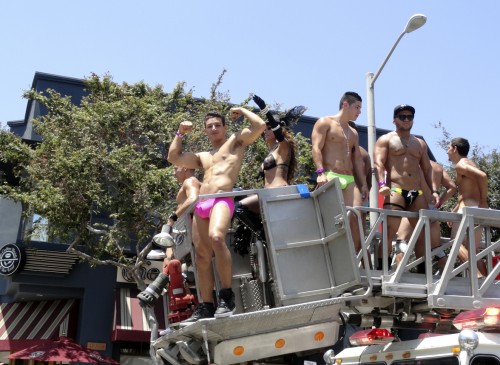 This year’s CSW West Pride parade and festival were under some serious scrutiny due to complaints about the lack of fun, excitement and luxury that people have experienced at past Weho Pride parades.  Word on the wire has it that people are also tired of the 20-dollar cover charge and chain link fences that make people feel like they’re caged in a chicken coop at the festival.

People bitching about Pride is nothing new, lets-be-for-real-here, but this time around the cries reached the chambers of West Hollywood City Hall and some council members called CSW out on the carpet earlier this year demanding to know why things are the way they are at Pride—the people have spoken and they want more party floats and less lame marketing convertibles with banners dangling from the sides with business logos.  The people also want a free festival like they do in San Francisco with wide…open…spaces.  There’s even talks about moving the parade to Saturday night, to which I say…good luck with that.

I found myself nervous for this year’s parade.  Every time I saw a politician waving at the crowd from the back of a less-than-exciting truck, I cringed…just a little.  Then there were a few long gaps between floats as well as the crazy line that curled down Santa Monica Blvd to get into the festival and I was like “Ooohh…someone’s gonna get dressed down and called out.”—Oh yeah, we also got sweet Molly Ringwald as our Grand Marshal, which is great, but you wanna know who San Francisco got to headline their parade?  They got badass bitch Sarah fuckin’  Silverman, that’s who (ooohh, the outrage)!

However, all politics and behind-the-scenes drama aside, people seemed pleased with the event.  I think the program fared well.  I noticed some pretty exuberant floats this year, so people were clearly forced to make an effort.  I missed the Liz Taylor float that was recreated from the Rose Parade (I think I was takin’ a leak when it went by), but I hear it was a definite highlight.  Micky’s got it right by hiring a Mario Lopez look-alike clad in a pink bikini with a cock-ring pushing his business out and sticking him in front of giant firetruck that was packed with other dirty naked boys (can’t go wrong with dirty Latino boyz).  The suds float was pretty cool and the Greek inspired Molly Ringwald float looked pretty expensive.  I also liked the Revolver float…which was shaped like an actual revolver (long pause) that blew bubbles.  A standout for me personally was the GLEH (Gay Lesbian Elder Housing) Double Decker Bus.  I loved the senior queen holding a sign that read “We are you 35 years from now”–sending a cold shiver down the rigid spines of queens everywhere with a Peter Pan Complex.  And of course there were the shirtless hotties and fab freaks of nature that were their own parade outside of the parade.

I didn’t make it to the festival this year on account of I had to work (I was so pissed by the poor planning on my part), but I heard nothing but positive things about the new layout in the newly open West Hollywood Park, so there ya have it.

Anyway, below are some pics from the parade. 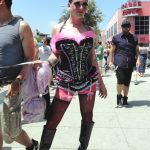 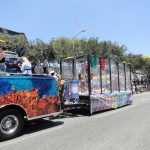 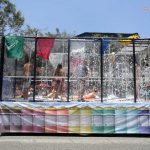 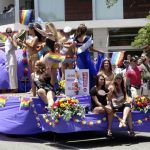 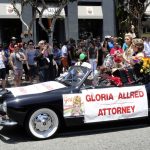 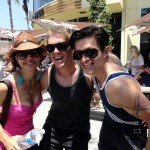 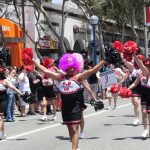 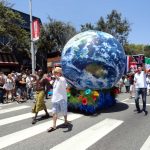 Oh yeah, and of course, LA Pride would NOT be complete without a shot of Dragorilla being her usual obscene self–I’m talkin’ about gross, vulgar and just plain WRONG!!!

STARBUCKS PRIDE POSTCARD FROM A LEDGE