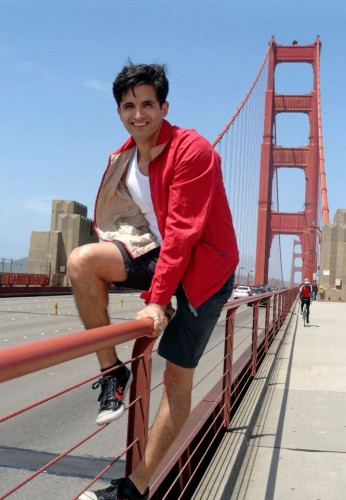 My ass was in San Fran recently and I could not help but think about all the times when I crawled out of this or that gutter from this or that corner after behaving like total and utter trash at this or that hole in the wall bar.

It’s been a couple of years.  I think the last time I flew to San Fran, it was to see Goldfrapp in concert back in 2008.  I was newly sober, so my ass was on edge the entire time.  We only stayed for the weekend.

Funny story:  I was introduced to crystal meth on my first trip to San Francisco back in the early 90’s.  I think I had just turned 21.  I went there with my roommate who took care of our travel arrangements, which included some ratty hotel in a choppy neighborhood off of downtown.  I wasn’t much of a drinker back then and I was a huge snob about losers who did drugs, so you can imagine my horror when I realized my friend was packing party favors in the shape of a baggy, which he smuggled past airport security and into our plane (innocent times), completely putting me at risk of getting busted by association.  I remember this friend/roommate was bouncing off the walls and a raging bitch on that trip.  He also took off while I slept in the late hours to do what people do when they’re high on meth.  I must have been a total bore, because during our stay he busted out with the baggy and told me to try some.  He lined that shit on top of the TV and handed me a straw.

“Ohmigawd is that cocaine?” I asked horrified (innocent times).

“No,” he responded matter-of-factly.  “It’s crystal.  It’s better than cocaine,”  He coaxed me.  “Just stick in your nose and breath in like this.”  He demonstrated by snorting a line.  “It’ll give you energy.  We can go out dancing all night.”

That was the first time I leaned over a fat line of meth.  I held the straw.  I took a deep breath.  And I BLEW that powdery substance all over the top of the TV and onto the carpet.  The bitch flipped out.  “What are you doing!  That’s 40 dollars worth!  I can’t believe you!”

“Are you fucking stupid!” I responded.  “I don’t need to do drugs to have fun!”

I was introduced to crystal meth, but I had no interest it what meth had to offer.  It doesn’t work that way.  You don’t go from a lousy drinker who is horrified by the thought of cocaine, to snorting meth (…however, I was well on my way).

My friend and I had two totally different experiences of that San Francisco trip.  I remember us checking out of that ratty hotel.  There was this dirty old man running the front desk–I swear he looked like a janitor.  Anyway, my friend later confessed that he was so high, he sucked that old man off while this old fuck worked the graveyard shift.  “How embarrassing,” he wailed.

By the time I revisited San Fran, my ass was off and running during gay pride weekend.  I was with the same friend only this time my dirty ass was doing bumps of coke, crystal and dropping E tabs inside port-a-potties and behaving like total and utter trash.  How embarrassing!

Of course…like they say…”We will not regret the past, nor wish to shut the door on it.”

In the present moment, my trip to San Fran had an actual itinerary that included a loving partner who took pics of me hanging off the Golden Gate Bridge; we visited the Castro during the day, took in the architecture, did some shopping, and had seafood at Fisherman’s Wharf before we drove to the cute sleepy town of Healdsburg, California for bike rides, long walks, good food and other uncool activities that I can actually remember, appreciate and not look back cringing and talkin’ about—“how embarrassing!”

One of the biggest gift of sobriety is regaining some innocent times. 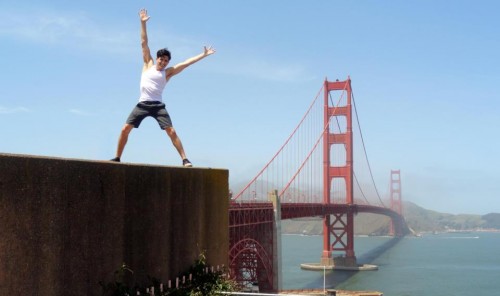 Good to finally meet you.