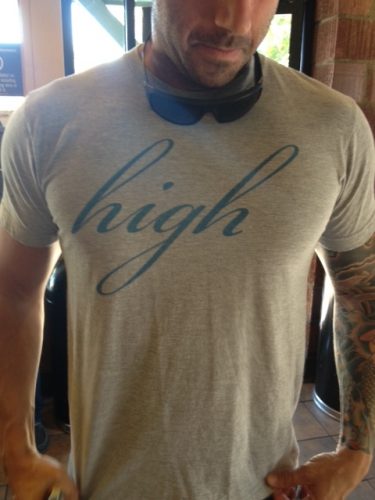 I saw this guy at Starbucks this morning and I just HAD to take a pic.  I’m sorry, but people who really get high don’t like to advertise that they get high.

I reckon you advertise you’re high to score more dope.  People also put it out there because people get high to fit in and be cool in school, even though school let out ten years ago.

I didn’t want people to know I was high.  The thought of people finding out horrified me.  I wanted to keep that shit on the DL (that cat clawed out of the bag).    Yeah, I wanted you to think I was mean and a low lifer, but doing drugs took low lifing to a whole new lower level.  However, I had friends who used to do a bump in a bathroom stall and then run out to the dance floor to tell everyone how they just did a bump and it felt good.  No kind of shame.  I get that the bump gave them some edge, and made them feel like they belonged, but that shit was cringe-inducing to me. I would squeeze an arm and hiss, “not so fucking loud…”

I swore I didn’t do drugs to fit in–I did drugs to STAND OUT!!!

I totally get that the guy at Starbucks was being ironical.  The shirt went well with his tat sleeve and black shades around his neck.  The whole look embodied DOUCHE HOLE!  But the guy was way sweet when I asked to take a picture of his rack.  I fought the urge to squeeze that tat sleeve and be like…