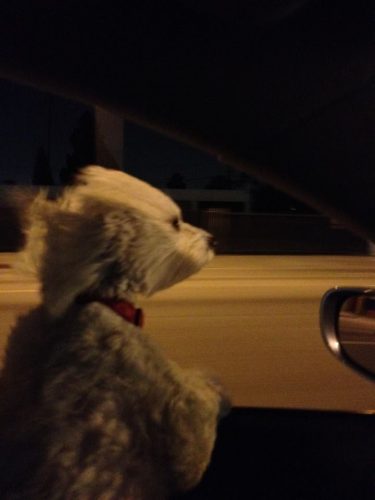 Her name is Yuki.  I’m told it means “snow” in Japanese (if it were up to me, she’d have a lil’ more Latin spice to her namesake like Lulu, Chata, or Chola).   She’s a Maltese and Bichon mix (MaltiChon) and seriously one of the gayest dogs anyone could ever acquire with her tiny stature and white fluffy-wuffy, super soft hypoallergenic hair (yup, that’s  hair–not fur).  The little bitch is freakin’ cute let’s just call it like we see it.  And one of the sweetest pups I have ever encountered, which is saying a lot coming from me, cuz anyone who knows me KNOWS that I’m not much of a dog person (alas…everything I resist seems to persist in my in my life these days). 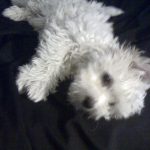 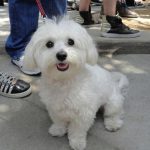 So one night I had Yuki on my lap while sitting on the passenger’s side of my boyfriend’s ride while we drove down Melrose Ave.  Yuki had her head out the window, cuz she loves the wind blowing her bangs back.  Just then an SUV pulled up alongside of us.  A guy smiled at me and asked.  “Hey dude, is her name Precious.  It’s Precious isn’t it?  Hey Precious.”  He called out to Yuki.

“No,” I responded naively.  “It’s Yuki.”  I sounded so gay with my white fluffy-wuffy dog on my lap.

Yuki of course wagged her tail like crazy, trying to jump out the window with her nose pointing at that guy.

The guy laughed as he drove off.  I caught a glimpse of his girlfriend (I decided it was his girlfriend) smacking him on the arm the way women do when their guy is out of line.

It wasn’t until I was getting ready for bed that night that it hit me…PRECIOUS? OMG, PRECIOUS!  That’s the dog from Silence of the Lambs!  I’m talkin’ about Buffalo Bill’s cute white fluffy-wuffy gay dog.  I’m talkin’ about that creepy guy dancing to Goodbye Horses with his dick tucked between his legs.  I’m talkin’ about the serial killer of fat girls that muttered the most disturbing words in cinema history:  “I’d fuck me.  I’d fuck me hard.”

Jame “Buffalo Bill” Gumb: Now it places the lotion in the basket.

What made that fucker think of THAT movie in the middle of the street on a random night?  Straight guys can come up with the weirdest, gayest things.

(Waiving a fist in the air)

That mutherfucker straight up called me a faggot.  To my face!

And this is why I hate people.

Even if though Yuki is BEYOND precious.

POSTCARD FROM A LEDGE WTF MOMENT OF THE DAY