The bitch dragged that shit out with throwaway episodes and all kinds of nonsense (Lil Kenya returned and then sashayed away).  We had to wait to the very end to find out what rules the wicked Willam broke and we also had to wait an extra week for the winner to be announced (lame-sies)—not only were Willam’s crimes watered down, but the crowning we all witnessed on Monday night was fake, fake, FAKE!!!  They filmed three queens getting that tiny crown.  It’s no wonder Sharon looked like she had popped some dolls when she was announced as the winner.  “Happy Halloween” is the best she could muster.  She won because she was real.  Asking her to do a fake victory walk down the runway is just plain cruel and an insult to her fans and to Rupaul Drag Race fans as a hole…I mean “whole.”

This is my first time watching Rupaul’s Drag Race from beginning to end, so you can only imagine my disappointment by the much anticipated reunion/finale show.  I was hoping it would be revealed that Willam got caught taking female hormones.  Or doing bumps of cocaine in bathroom stalls.  Or stealing one of Rupaul’s wigs.  But NOPE!!!  The whole Willam fiasco was candy coated into some silly crime that added up to forbidden conjugal visits—anyone feel a BULLSHIT sneeze coming on?  I heard from a friend of a friend who knows a friend’s sister’s cousin who’s in the know that the bitch was getting visits from her partner alright, but these visits were more about cheating than sexing.  I heard she was getting shit delivered to her via the Hubby Express.  Shit was being stashed behind planters in hotel hallways and so forth.  I’m talking about shit such as those cute Willam star stickers and designer outfits and so forth to give the bitch the upper hand.  I also heard she barfed.  A lot.  Why the conjugal visit facade, you ask?  I guess it’s better to come out swinging as an object of so much sexual desire, that your own husband has to sneak in a few pumps while the camera crews are away (ooh you horny rule breakers, yous)–rather than to come out squirming as a big cheater-cheater-pumpkin-eater.  And Rupaul cheated her audience YET again by not really revealing the truth, or even pressing for the truth.  Lame-sies.

Or so I heard…

Sharon Needles was THE obvious winner, but I was sure Chad Micheals was gonna get the crown, cuz every lame show producer loves to give you an upset ending (I can’t watch Project Runway for that reason).  Phi Phi winning would have started a Stonewall style riot.  I think if it were really up to the power of the people, Chad would have won.  She was pretty flawless and regal and lovable, but I was happy Needles got the cash and the crown and the title of American’s Next Drag Superstar (what exactly does that title MEAN anyway?).  Ru got it right, although it made me so mad when the bitch told his audience that this time around the people would get to vote for the winner.  I actually tweated for @sharon_needles.  Then on the final episode the  self-serving bitch says, “But the final decision is mine to make.” Lame, lame, LAME!!! 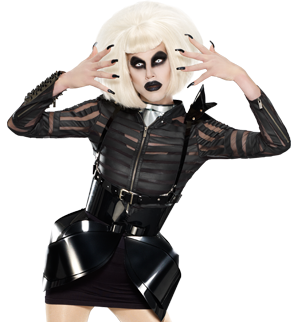 Miss Congeniality Latrice Royale stole my black little heart, making her the real winner of the show.  She’s a big girl with a big heart and some big wisdom.  A jailbird at that.  The real deal.  Muthafuckin’ down. And she owns her shit.  Add funny to the math and it’s no wonder she landed a gig at the Drag U show, which I REFUSE to watch on account of I’m not interested in a makeover show where soccer moms go from drab to drag fab (puke).

Then there’s the hateful  Phi Phi O’Hara.  She’s the evil queen in all of us, lets-be-honest.  That’s why we hate her so much.  All you have to do is look into any I Hate Phi Phi Facebook page and you’ll witness queens call her out for being evil while GETTING evil, which to me is just plain evil.  And speaking of evil…I can’t even lie…I L.O.V.E.D watching her get hers in the re-union/finale show. She remained unapologetic until the end—“I’m sorry you feel that way,” she told Jiggly Caliente after it came out how she fucked her over.  Willam called it best when she called Phi a sociopath.  And I didn’t buy those crocodile tears for a second.  When the Lee Press-On nails went dull, the tears kicked in and clawed for the $100,000 and tiara.  I would have really l.o.v.e.d. it if Ru had called her out as a third runner-up.  We all know that’s how it really went down.

Back to the winner:  I find Sharon Needles very interesting.  Put aside the gore, and old hag drag and Morticia Addams motif, and you’ve got this bitch that can barely walk in heels, she can’t dance and she can’t lip-sync, but the talent is undeniable.  She’s funny as all fuck and she’s clearly the voice for underdog gay freaks everywhere.  She makes me want more.  She also has a drag queen lover named Alaska Thunderfuck (drag queens dating drag queens…VERY fascinating).  I also found it interesting how fearless she was in the beginning of the show.  It’s like she didn’t care, because she didn’t think she would go far.  The power of effortlessness was evident (she even farted on stage, which I hate to admit, made me howl with laughter).  Then as she got closer to the crown, you could see those demons kick in—I’m talking about the demons that tell you you’re no good, not good enough, or amount to much and then paralyze you with fear of success mixed with fear of failure and try to trump you with self-sabotage (yup, those demons).  Towards the end, she was filled with self-doubt.  It’s the only thing that could explain that horrible gray t-shirt dress and those tentacle fingers during the fake finale show before the real finale show…which of course turned out to be fake, fake, FAKE!!!

To Rupaul, I say all that tucking has gone to your head.  “RUPOLOGIZE!”  There is a fine line between surprise twists in a show and then there’s the dirty shit you pulled this last season.  Keep insulting your audience who tuned in and devoted their time and their TiVos to your show every Monday night.  Keep saying one thing, meaning another and then doing another.  Keep holding out, don’t deliver and then try to pass what’s already faker than fake for realness.  AND I WILL STOP WATCHING.