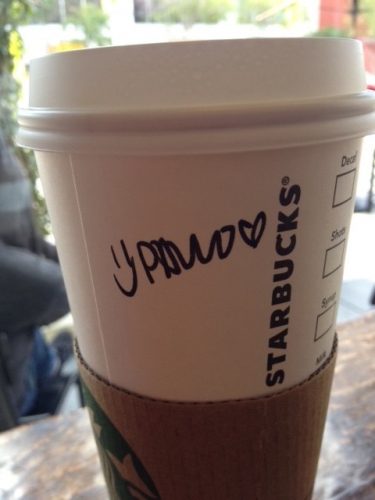 I was born Paulo Elias Murillo.  I know it sounds like a name straight out of a Spanish “novella,” but that is what it says on my birth certificate.  I have been called a lot of things in my lifetime.  But my name is Paulo.  It’s not Paolo.  It’s Not Paul, Apollo, Diablo, Paco, Pancho, Puto, Perro and it is NOT Pablo.

When I was a kid, I was simply known as “El Gϋero,” which is another word for blondie on account of I was one of those weird Latin boys with light skin and blondish hair (I was also called “El Gato”–Spanish for cat–on account of I was lazy, finicky and mean…or so they said).  Of course the darker genes eventually took over and completely stained my wannabe whiteness.  Then I entered grade school and I was referred to by my actual name for the first time–or I should say my name was butchered for the very first time.  People could not pronounce the Pau in Paulo. 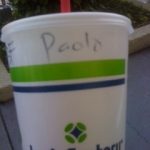 Paulo didn’t last for long.  I remember when the the “u” was dropped and replaced with a “b.”  I was in the 3rd grade.  My teacher’s name was Mrs Givens.  There was a Paulo and a Paula in her class.  Poor Mrs Givens would get confused when she graded our papers.  We were learning the hand written form and my “o” looked like an “a” and Paula’s “a” looked like an “o”.  So Mrs Givens straight up gave me the name Pa-blo.  She took liberties, because that’s what some bitches did with bean children back in those dayz (I remember she had this long bony index finger that would make you stop cold in your tracks whenever she aimed it at you and curled it to have you to come to her.)  I hate Mrs. Givens. 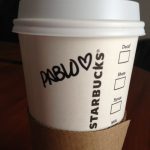 At home I was still “El Gϋero,”” even though there was nothing “Gϋero” about me.  My mother didn’t question the “b” when it came up.  She named me after my grandfather Paulo, but she realized very early on (the way mothers often do) that there was something off and fishy and a little sweet about her eldest son—I remember when my mother saw a grownup picture of me in a gay newspaper.   It was the Halloween issue.  I was dressed as a cowboy baby, shirtless, in a diaper and a stick horsy wedged between my legs.  She looked at that photo long and hard.  She shook her head slowly and said:  “Que pena [what a shame].  If I knew this is where my father’s name would end up, I never would have named you after him…” (of course more scandalous articles and skanky photos of me followed…with no kind of “pena”). 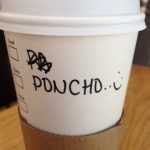 The Pablo nickname stuck throughout high school.  Then I got a driver’s license and I got a paycheck and everything pointed towards my birth name.  Everyone told me they liked Paulo better than Pablo (Pablo was too…ethnic they said) but I was hesitant to go back to my given name.  I didn’t want to be one of those Latin bitches that changes his name to sound foo-foo like some stage name inspired from a Spanish “novella.”  Pablo is not that different from Paulo, but I knew people would gravitate towards Paul.  And I was hell bent on keeping the shit real and not Americanizing my name the way Latin peeps often do for whatever reasons–be they shame of their cultural heritage, shame of family gene pool, or just plain self-shame—I have a friend who was born Jose Luis Maria Garcia De Magallanes (where I was “El Guero,” they called him “Chepe”).  He changed that name to Joseph Magellan.  Can you imagine me going by the name Paul Murray?  Disgusting display! 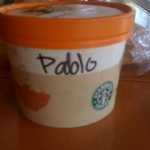 I remember working at the then Sports Connection in Weho in the early years.  There was sexy member at the gym named John Williamson who kept scratching the “b” off of my name tag and trying to turn it into a “u.”  He insisted I drop the nickname and go by my given name.  “Paulo is a beautiful name,” he told me.  “You look more like a Paulo than a Pablo to me.”  John was relentless. “I’m begging you.  Go by the name that is rightfully yours.”  And so forth and so on.

Then I thought about how Mrs Givens changed my name.  She had no right.  I thought about my mother’s shame.  And I said, fuck you Pablo, my name is Paulo Elias Murillo.  And I have been Paulo with a “u” ever since.

Paulo comes with its own challenges.  They almost never get it right at Starbucks.  People mispronounce it.  People always ask where it’s from — “Is it Italian?”  “Is it Brazilian?” “Is it from Spain?” — “No,” I answer.  “It’s Mexican.  I was named after my grandfather.”  There is always a hint of disappointment or discomfort as if there were something wrong, less than, or not as fancy.

I remember back when I was drinking and drugging and being cool, I used to claim I was Brazilian.  But then they would ask me what part of Brazil (they always ask from what part) and I would draw a blank.  In my drunken haze I would be like, “You know…um…the Brazilian part.”  I also liked to say that I had some Brazilian in me…until the Brazilian pulled out (HAH)—but that was a lie.  I would never let a dirty Brazilian mount me (just kidding…about the dirty Brazilian part that is).

Then along came Carlos.  Carlos was my slut name back when I was on the prowl via  adultery.com, because I was ashamed of my hooker status and afraid somebody would recognize me from my neighborhood.  Carlos was just a fit normal laid back guy on the DL, looking to hook up with no strings attached.  Carlos was close to Paulo.  If I should run into an old trick and he should address me by Carlos, I would be like, “Oh no, you misunderstood me.  My name is Paulo”—of course Carlos was cremated and placed in an esophagus right alongside Pablo.

The name is Paulo Elias Murillo.  It may stink after me at times, but that’s my name.