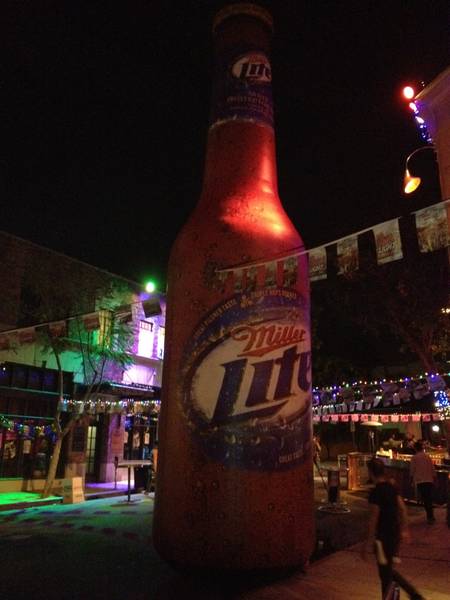 The giant blow up beer bottle.  It is forever a symbol of decadence.  I took the picture above around 6pm.  This is the city of West Hollywood getting all lubed up for a Mardi Gras party.  But the motif smacks of a Cinco de Mayo fiesta more than anything resembling New Orleans mayhem.   There has always been something sad about this little party that used to take place in the back ally of Weho’s Santa Monica Blvd.  You have guys walking around with plastic beads, but these guys tend to be too shy to show you their thingylings, because there’s nothing sexy about a limp little thingyling dangling in the cold darkness with Weho’s finest standing by.  Indecent exposure can be labeled a sex crime, which can add your name to a list of sexual predators. Then again I always found it pathetic when drunk guys put their penis on parade for a bunch of plastic balls that end up dangling from rear view mirrors.  And people take pictures.

I’m sure the party will lighten and liven up once the Miller Lite draft beer sets in.

BE NEW, BE YOU, BE BRIGHT BEAUTY, BEAUTY LOOK AT YOU