GOD SAVE THE QUEEN? 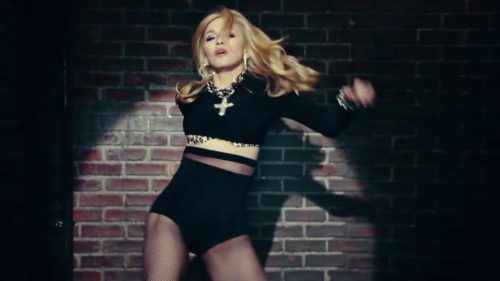 I just downloaded M’s new Give Me All Your Luvin’ single this morning.  I was hoping it would be different from the the demo that was leaked last November.  But at alas…it’s pretty much intact with Nicki Minaj and M.I.A. copied and pasted towards the end of the track.  And done poorly too.  They jump in and it makes no kind of sense.

I guess I’m just NOT a Minaj fan!  I don’t get/can’t stand her signature cartoonish fast tracks with her pitch raps going higher and higher as the song progresses to the point where you can’t understand a word she’s saying—for example:  Does she say she’s clowning or crowning in M’s new single?  She sounds like she’s drooling.

M.I.A. caught the ball though.  Somewhat.  Her sound is tight’ the voice is strong and deliberate even if it’s brief in a pom-pom rah-rah bubble gum song like Give Me All Your Luvin’.  I remember I bought her first album straight out of a listening station way back when, without knowing a thing about her.  She’s also a real tropical beauty, even in the horrible platinum wig she wears in the Give Me video.

Ugh!  Gurrrrls…the video.  Just horrible.  One big Super Bowl promo.  Worse than the Nothing Really Matters video, which was a bad video that happened to a very good song.  What a cluster fuck.  The baby carriage.  The creepy Clockwork Orange masks on the cheerleaders.  The robotic football players.  She’s being shot at by some random Dick Tracy machine gun.  She’s walking on walls (OK, that part was cool).  She’s in Marilyn Monroe drag promoting Absolute Vodka in the background.  And there’s no kind of story whatsoever.  I miss those mini movies.

Anyway, expectations are high.  People are gonna hate (ferocious gays are out for Vadge blood at the moment).  They’re gonna say that she’s desperate and leeching off of these two younger artists, but that’s bullshit.  It’s these two younger artists who will be catapulted to bigger and better things after Superbowl this weekend.  And it’s M who took them there.  Let’s be for real here, half the people that matter don’t know who M.I.A. is, and the other half confuses Minaj with Lil’ Kim. But that’s not what they’ll be saying.

OFF WITH HER HEAD!!!

I say, let them hate.  And then they’re gonna love…or convince themselves to love.

I just can’t quit the bitch.

And that’s just the way it goes.