BIRD IS THE WORD 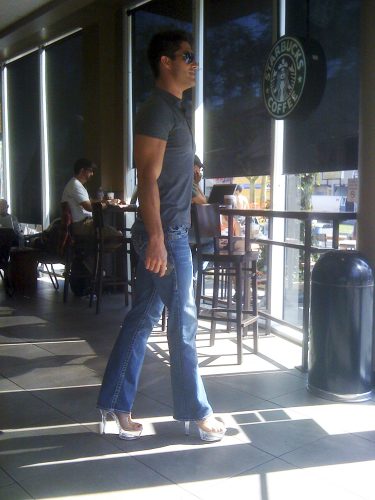 It was a typical West Hollywood morning.  I was at the Starbucks (aka the Weho Corral) with a friend sipping on our Venti bold cups and doing what we like to call “bird watching,” which is basically checking out guys and their packages as they battle it out for the best bulge when they step onto Santa Monica Blvd wearing sweatpants or gym shorts without any underwear–leaving little to the imagination.  Free-balling is a way of life for some guys, yet they still perp like they get mad when they catch you looking at their pecker track that’s been put on parade (when bird watching one should sunglasses—“Oh, delight hanging to the right”).  Yup, the bird is the word, but of course we also get the occasional feathery hen who tucks everything that’s in the front between his legs and sticks what he’s got from behind out to display some better assets.

Two rare birds walked into the Starbucks establishment: one was dressed in full-on fuck drag wearing some garish girlie getup with hot pink bursting out of his masculine torso and bouncing off the walls.  The other guy was dressed in Weho boy drag, which consisted of a tight polo shirt with equally tight True Religion Jeans that hugged his ass just right—oh yeah, the boy was prancing around in these super high clear hooker heels that would put any tranny train wreck to shame—err, I mean “transgender identified person.”

It was random.  Funny as fuck.  And confusing as all hell.

And it happened so fast.

I wasn’t able to get a shot of the boy in a dress, but managed to get his friend as he made an exit. 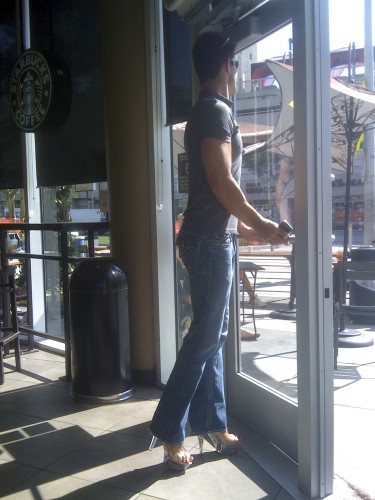 And welcome to West Hollywood…

OH WHAT A CIRCUS, OH WHAT A SHOW THE ‘I WAS DRUNK’ CARD