OH WHAT A CIRCUS, OH WHAT A SHOW 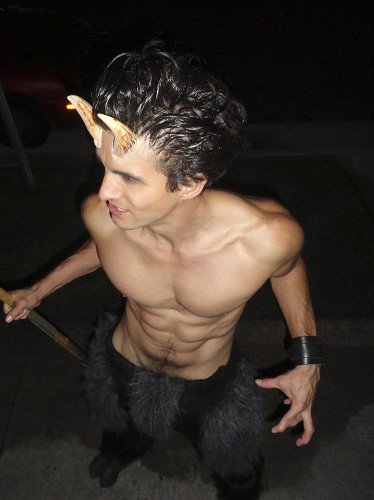 This year’s West Hollywood Halloween Carnival delivered the crowd, the costumes and the crazy mayhem like the city does every year.

For one night only, straight mixes with gay in somewhat decent harmony and everyone tries to outdo each other in the form of creativity, political incorrectness and straight up stupidity with the hopes to get whatever it is that people get when they dress up to hit Santa Monica Blvd on Halloween night—I guess I shouldn’t say EVERYONE tries, cuz let’s face it, a lot of costumes that night are totally uninspired; I’m all for the slutty bumblebee and the pornographic Sarah Palin, but when guys step out in their underwear and call it a costume, I’m forced to call bullshit.

If you know anything about me, then you know that I try not to fuck around on Halloween.  It’s kinda/sorta my thang.  I try not to go too over the top—in fact, I keep it pretty simple with shirtless douchery being the common theme.  And in true shirtless douche fashion, I decided to dress up as Pan, the half-goat/half man known as the god of nature very similar to a faun or satyr.  Pan is considered the god of the wild; the ancients Greeks also thought of him as the god of theatrical criticism (evil grin).  Yeah, it’s been done before, but not too many guys can pull it off, on account of you have to literally starve for weeks and workout like a dawg before the big night. 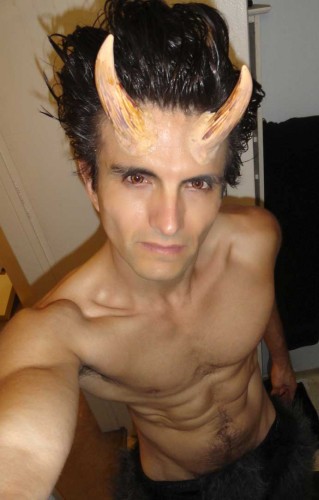 This year I went for amber colored contact lenses (they were a bitch to jam into my eyeballs and they hurt like hell once I got them in); I had the goat legs custom made by a friend from scratch, all last minute style after I made a disastrous purchase on Ebay (every gay should friend some sort of tailor and photographer for such emergencies);  My hair is pretty long so it worked well with the horns and I did every form of abdominal workout imaginable just so I could represent for the W.E.H.O. 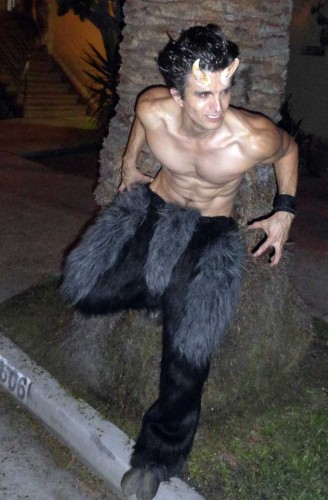 A handful of friends met at my place before we hit the boulevard, knowing too damn well that they would get swallowed up by the crowd once we got there.  I also had my boyfriend with me for moral support (and to hold my wallet/keys/phone…and to keep my ass in check).  We just wanted to see what we could see.  Of course, the PAN AM flight attendants were out, but they couldn’t afford the real PAN AM bags, which I thought was pretty lame and pointless.   I didn’t see too many original costumes, but the Frankenstein monsters were well done, as were the zombies and numerous skeletons.  Some guys were so damn cute, they didn’t need a costume; a Superman t-shirt worked just fine.  We saw Obamas and Black Swans, and I even got my picture with the Pope—and I didn’t see a single Snooky or a Snooky bun in the crowd this year, which was surprising.  Oh yeah, Dragorilla (aka Monsterella, aka Dragzilla) was also out and about; for the first time I found her fucking disgusting.  She sat on a curb with legs wide apart in nothing but lace panties, saggy tits hanging out and a hot pink boa. She was pinching the tip of her tiny dick, which was the size of a two-inch clit.  Asian people were freaking out.  It was so fucking gross—and speaking of Asian peeps…a lot of them were in costumes this year (meaning a lot of Hello Kitties), as opposed to previous years where they just brought their cameras and took photos.  The tables flipped with me asking a cute drunken Asian straight guy in a Boyscout uniform if I could take his picture.  It was like…Opposite Day.

When all the lashes are glued on and stiletto heels are strapped on, it really boils down to the pictures.  It’s fun having your picture taken and it’s the only night of the year where it’s OK to act like something that you’re not.  You could never tell there was a recession by the massive crowd, the costumes and the large collection of smart phones snapping away left and right.  It’s a great escape. 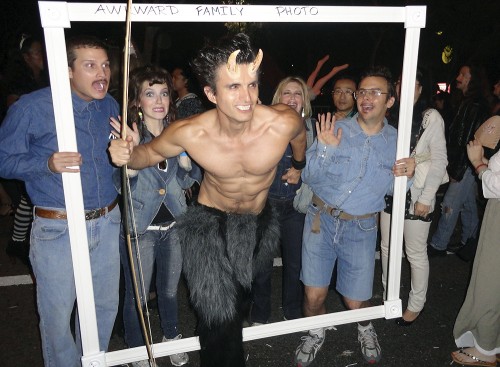 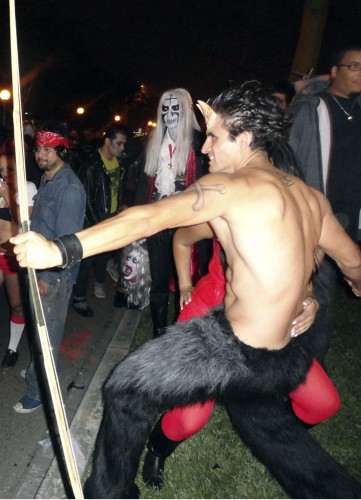 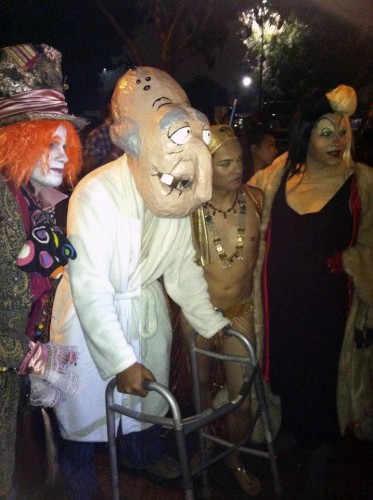 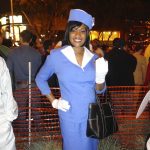 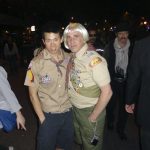 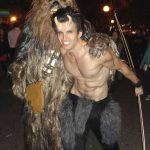 It was a fun night.  It was exhausting.  And it was crowded as all fuck.  I heard that Robyn performed on the main stage, which is funny cuz we just saw her at the Hollywood Bowl two weeks ago (I hate her hair).  It also felt safe with police presence in every corner and standing at every road block.

Then the carnival ended and the police left their posts.  I have to say that I never quite understood the tail end of this festival.  The music dies and the street cleaners come out, and it seems like the cops go home when the crowd gets dangerously rowdy.  At the end of the carnival is when you get aggressive drunken straight assholes walking next to slutty girls and brave drag queens that are inebriated from so much attention.  It’s a dangerous combo.  I saw one asshole press a guy in the neck to tell him that he liked his tattoo.  Tattoo Guy said, “Don’t touch,” with a thick Mexican accent that sounded more like “Don’t tach!”  In response Asshole slapped Tattoo hard on the back of his head.  Then he made a big chest and did that stupid bounce that assholes do when they want to start shit.  I saw the entire thing unfold; a gay guy getting bullied by some drunk fuck.  Bullying is a hot button right now, so surely cops would intervene.  I looked around for a one and there wasn’t a cop in sight.  Man, I wanted take to matters into my own hands and smack Asshole on the back of the head so hard to see how he like it.  I imagine not so much.  Tattoo did the smart thing and walked away.  I kept stepping also.  Truth is, I’m much too grown to get into street fights; there’s that, and I didn’t want to break a horn.  Like totally.

My friend Albert and I were the last men standing from our small group towards the end.  I couldda kept going, but my eyeballs felt like they were on fire.  I was seriously experiencing vertigo towards the end of the night.  Drunken Amateur Hour of Power aside, it was another successful Halloween Carnival.  The City of West Hollywood turned that shit OUT.  It’s kinda/sorta their thang.