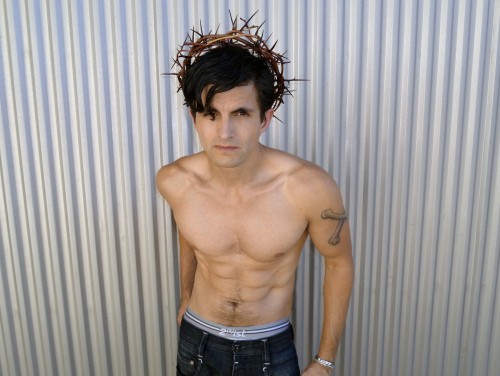 I came THIS close to dressing up as The Big JC this coming Halloween–especially after finding the most purrrfect crown of thorns on Ebay…which I promised NOT to place on my head before I could purchase it from the seller who warned me that these were real sharp thorns that could cause some serious injury.

My guess is that she was trying to cover her ass with a disclaimer.  My other guess is that she didn’t want this iconic symbol of The Passion being used inappropriately by some shirtless douche, judging from the collection of other religious nick-knacks she has on her sellers list.

Alas…Jesus Christ may have had a great set of abs, but I don’t think “sexy” when I see him slung on a wooden cross.  Then I would have to wear a wig, there would be a bloody mess and the unflattering posture while lugging a log over my back down Santa Monica Blvd on Halloween Carnival night.  I decided to nix the JC idea for a second year in a row and go for something a little bit more fun.

Then again I could NOT let the crown of thorns go to waste at $30.00 plus shipping.  My good friend drove around Culver City California and he took a bunch of pictures of me in front of different backdrops.  What else does one do with a crown of thorn?  Am I supposed to hang it on a wall as some sort of twisted decor?

And wouldn’t you know it, that bitch on Ebay was right:  The Goddamn crown hurt like HELL!!!  It was an instant migraine headhache that lasted for hours after the photo shoot.

Ain’t that some shit?

ROBYN AT THE HOLLYWOOD BOWL: FRUMP GIRL POWER!!! LET’S HEAR IT FOR THE GO-GO BOY