I can’t help but stare at the guy every time I see him while I’m getting my beauty pump on at my local gym.  He’s one of those hetero fitness trainers who works in West Hollywood, but he won’t be caught dead playing in it, on account of the city is infested with queers.  He’s a good looking guy, if you’re into youngish straight guys with traditional dirty blond spiky locks, blue-eyes, chiseled jaw, perfect tan, and muscles galore.

Yeah, he’s cute. However, that’s not the reason why he catches me looking at him all the time.  I’m mostly fascinated by his uncomfortable stiff gait, his tight upper lip and the deadpan look on his face whenever he feels a guy is checking him out.  You can practically see him clamp a tight fist in his butt to protect his nether region whenever a gay guy is too close for comfort.  He’s clearly not that comfortable around the gays, but he must pat himself in the back for working at a gay gym.  However, he comes off as not very friendly.  He never nods a wassup, nor does he engage with the members on the floor like any honorable straight guy should do when he’s putting his hands inside a gay man’s front pockets while digging for his wallet—not that I have anything against hetero guys who don’t mind being gay paid.  Hey, times are tough.  Go ahead and get yours, but shit bitch, how about a gracious smile while you’re at it.  Fake it till you make it.

The guy reminds me of this black kid that used to walk around the gym floor wearing a shirt that read “I’m not a fag,” which he clearly wrote himself with a black sharpie.  Members complained, because I later noticed that he changed the message to a more gay friendly “I’m straight,” but still so fucking presumptuous.  He’s not even that cute!  I wanna wear a shirt that reads “Bitch!  Don’t nobody want you but you.”

So here’s the deal:  I was at the Corn Grill in Weho.  Cute Straight Personal Trainer Dude was there with a bunch of other hetero trainers, who also tend to be equally standoffish.  I heard him use the phrase “that’s gay” in reference to something being lame…you know…like the way kids like to do nowadayz.  I took a hard look at this guy with his perfect tan, his pretty bi-weekly haircut, his super tight t-shirt…and his SHAVED legs and I could not help but go there.  I pictured him with one bronzed leg over a bathtub with a Gillette Daisy Plus Razor on hand and going to town on his unwanted hair.  I bet his balls aren’t spared the blade…which I find so damn gross—guys who pluck their balls and shave their pubes–gay or straight (especially straight)–should be strung from their testes for walking around like creepy pre-pubescent freaks.  I prefer hair down there.  I’m not saying I like a wispy black forest, but show me some hair down there dammit!!!  And the same goes for a pair of manly legs.

Anyway…Cute Straight Personal Trainer Dude may not be too comfortable around gays, but he walks around with shaved legs.  No razor bumps.  Lets talk about gay…in a bad way. 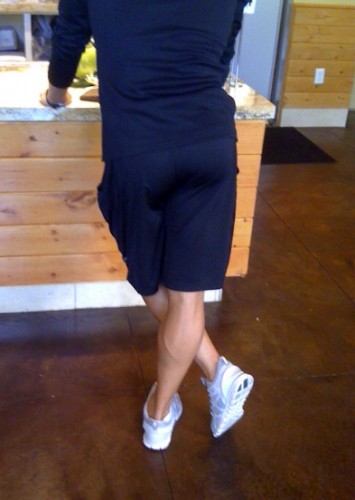 THE DJ MADE ME DO IT ALL NIGHT LONG I HEART/HATE ANGELYNE, THE OG HOLLYWOOD BILLBOARD QUEEN