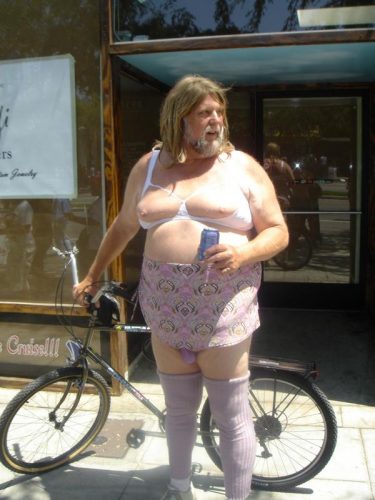 Seriously people!  All joking aside, what is the deal with this bitch?  He doesn’t appear to be homeless, or mentally insane.  He’s not confrontational, nor does he do anything extraordinary to get people’s attention–meaning he’s not loud, nor does he get in your face or do a dance that would suggest he is some sort of demented freak.

He just walks up and down the street.  And if you’re lucky, you may catch glimpse of him riding his bike up and down Santa Monica Blvd with his super obscene hole chewing and slobbering all over that poor bicycle seat.  He’s friendly, but doesn’t go out of his way to say hello.  He just does his own thing, taking the fuck-drag phenomenon to a whole new fucked-up dimension. 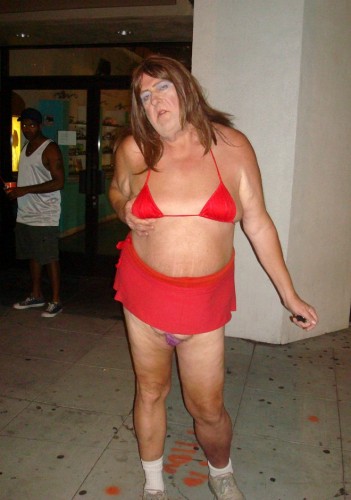 The first time I was assaulted by the sight of Dragorilla aka Monsterella, or Dragzilla as my friend Paul David Liehr calls her, I was actually hanging out with my straight friend Art, who had never been to West Hollywood.  I convinced him to have sushi with me and maybe do a little run-through of the local Weho bars.  I was curious to see how the boys would react to him on account of he’s a good looking guy in a very Antonio Sabato Jr sort of way (the boys loved him and I loved watching him get uncomfortable like a woman being perved on left and right).  We were walking towards the Abbey when there he/she/it/Dragorilla/Dragzilla/monsterella stood in front of the Greenwich Village pizza joint in the heart of Boystown, completely oblivious to the stares and comments that she was getting from drunken queens all around her.  The outfit for the night was a blushing pink.

Art dug his heels into the pavement.  “Ah dude!  Sick.  No!  Tell me this is a joke,” he gasped with this amazed horror.  “What the fuck is wrong with that man?”  He asked.

I was pretty speechless myself.  “What are you talking about?” I responded weakly.  “She’s beautiful.”

I must admit that Dragorilla  looks like a creature straight out of a John Waters film, back when he was cool, before he sold out to musical versions of his films.  A Dragorilla sighting can be almost as cool as getting a glimpse of Angelene the Billboard Queen in her pink Corvette driving down Hollywood Blvd, or that man that dresses like Jesus and stands in random locations for photo ops all over town.  These people are shrouded in mystery and committed to doing whatever it is that they do for whatever reasons they do it (scratching head). 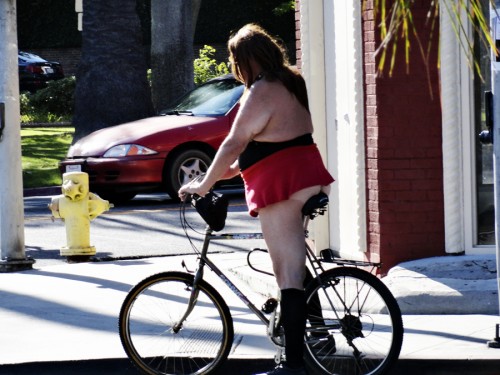 I had the best Dragorilla sighting the other day.  I was taking pictures of the new large scale Art Sculptures that were recently installed on Santa Monica Blvd by Doheny Drive for my Weho Hot Topic column in Frontiers Magazine.  Draggy rode by on her skinny bike with jacked up hair flying in the wind.  She rode up to Doheny, crossed the street, and then rode back down Santa Monica Blvd with cars almost getting into wrecks over such an unexpected fright sight (“I’d fuck me“).  I had to take pictures.   Of course, she glimpsed my camera from a distance, so she slowed her roll to let me get a good shot.  Then it occurred to me that this was the whole point behind the gutup…err, I mean getup.  This is probably as good as it gets for her.  She rides up and down Santa Monica Blvd with no purpose, no rhythm, rhyme, or a care in the world, just another queen seeking a little attention. 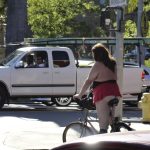 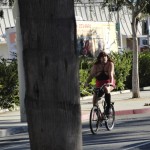 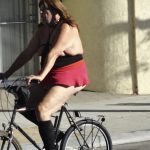 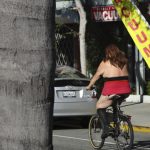 I guess there’s that homeless person with the amazing voice who made news not too long ago,  there’ the Dancing Homeless Man on Robertson Blvd, there’s the ventriloquist with the sock puppet that hangs out at The Hollywood Bowl, but none of them can touch West Hollywood’s very own Dragorilla.  One should be proud,  cuz in the city of WeHo, you just gottah be you.

Go ahead Dragorilla!  You do you–you dirty, dirty, DIRTY attention seeking whore, you…