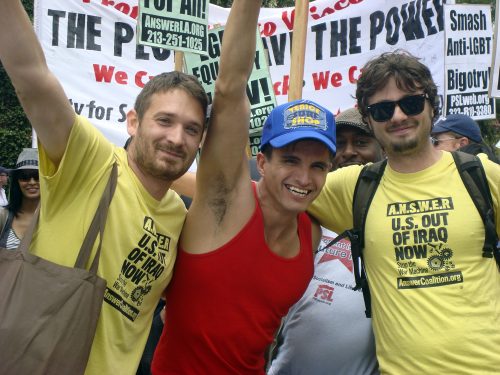 I’m not even gonna try to shit ya, the West Hollywood’s CSW One City/ One Pride festivities didn’t start for me until the late train when the parade was in full swing that Sunday morning.  I hate to have been there, done it, but my truth is I did “it” for the very first time back in 1991, when I was um…12 years old (ahem).  ’91 adds up to 20 years people.  That’s 20 pride parades and 20 festivals for yours truly.  I can tell you stories.

I know I’m supposed to be jaded about the whole concept of pride and its meaning, or lack thereof.  Truth is, I wasn’t on bitch mode when I stepped out of my apartment that Sunday morning.  Yes, a pride parade will forever have an element of putting a name, product, club, or organization on a pretty, glittery float and rolling it down Santa Monica Blvd to promote a name/product/club/organization, but that’s what parades are all about for the most part–be it Santa Claus selling the Macy’s store, or a hot guy gyrating in sweat-stained undies to sell The Abbey Restaurant/bar (nightclub?).  However, I’m forced to recognize that the majority who attend pride don’t care too much about the wizard behind the sequined curtain that monitors every float and marching banner to make sure numbers match a receipt with the word PAID stamped on it before it rolls down the rainbow paved road.  For the most part people do the parade to have fun and look cute and show that they’re out and proud to be part of the L, the G, or the B T.  I’m also forced to recognize that a shitload of work goes into putting this massive event together like a pretty bow at the Macy’s store, so I can’t bitch (much).

I was there to witness bits and pieces from the main event.  This year, I kept it on the low pro with no plans or expectations.  It was just me and a few close friends catching the parade and going to the festival.  There were no crazy rooftop parties with Kelly Osbourne.  No running around with my pubes and ass cleavage spilling out of my jeans.  And I didn’t throw myself at random strangers to fix a feeling.  I was mostly there to see what I could see… 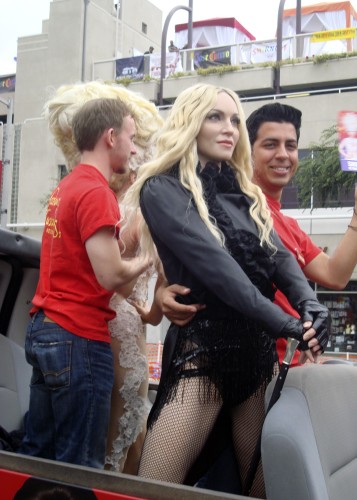 THE PARADE — I think this is the first year where I enjoyed watching the parade a lot more than the actual festival, which could be saying awful things about me that I’d rather not get into.  The parade was pretty tight.  It managed to pay its somber respects to 30 years of AIDS, people marched for same-sex marriage, and there was a celebration of the true meaning of family–yet it somehow maintained some edge.  I’m talkin’ about a big ass combo of trannies, drag queens, queens, lesbies galore, buff and pretty Speedo people, leather people–not to be confused with bears, politicians, and celebrities from A- to D lists; they had Madonna and Gaga on a float, or the closest to the real thing, which turned out to be their likeness made of wax from The Hollywood Wax Museum.  OK, so I was fooled.

Parents turned up to support their gay sons and daughters.  There were lots of teenagers there to support their gay friends.  And…(gulp) we had small children with their two mommies or a set of daddies.  It was inspiring to see the young came out with smiling faces to cheer and chant and scream, spreading joy, support and dare I say…hope.  These kids left a longer lasting impression than a leather daddy in a thong on a Tom of Finland float.  Snaps to CSW org for a smooth and semi fast moving pride parade. 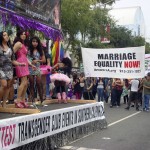 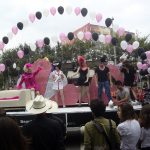 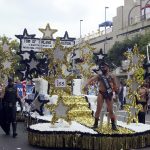 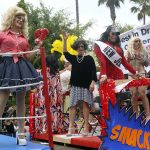 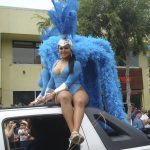 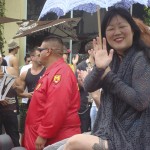 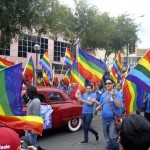 THE PEOPLE — An ’80s song says that we don’t have to take our clothes off to have a good time, but oh no, Jermaine Stewart’s words always go unheard at Pride.  Let’s face it, it’s more fun being naked.  Lazy queens simply slipped into pair of underwear, some knee-high socks and they hit the streets.  Unfortunately underwear is nearly impossible to keep clean in a large crowd when you have people groping and spilling beer all over you.  I would know:  One year I wore these yellow Joe Boxer shorts with the licky face logo on the front, and that poor happy face had stains all over it by the end of the day.  The following year I wore the licky logo on a small towel that I wrapped around my thin waist, which was a total disaster on account of drunk assholes tried to rip the towel off of me and I had evil queens use it as a rag and dried their hands on my hips (so annoying; see, this is why I hate people).  Cut to today and you have guys straight up wearing a skimpy Halloween costume to pride, which I guess is kind of cute if you’re into that sort of thing.  Then you have transgendered ladies wearing nothing more than duct tape over small nipples and a sequined thong, which again, kind of cute if stretch marks float your Chalupa.  Of course there were a ton of cuties that don’t have to try so hard like the rest of us.  The sexual energy was undeniable, but for the most part it was all hungry side glances and no kind of fork action.

This is the first year in the past 20 years that I vowed to keep my shirt on.  I find myself coupled these days and my boyfriend threatened to beat me with kitchen appliance if he found pictures of me on hooker status at Pride.  Actually the conversation went more along the lines of, “Now remember, before we retire at night we review our day,” he said sarcastically.  “Were we selfish?  dishonest? Did we instill jealousy in others?  Do we owe an amends?”  To which I added, “Did we have fun?  Were we cute?  Did we get attention?  Will we do it again…?”

THE FESTIVAL — People bitched about the festival being too small due to the construction at the park and the Erotic City being too lame–if not tame, and the Weho VIP rooftop parties bleeding the attendance out of the festival, but I didn’t mind the setup too much.  It’s always been about the dancing for me at pride festivals (and the free lube), which is why my only hiss fit goes out to the dumbass MCs at the dance tents.  I want to know who gave these fuckers a microphone.  What was the point of having a shit stirrer on a little stage screaming in our ears when all we wanted to do was dance!  They were like, “Hey!  Yeah! Work it out! Yeah! Wooh!  You’re hot over there!  Yeah!  What’s up?  Party people in the house! Yeah!  Wooooohhh!”  It was so self-serving, and stupid and flat out grating, because it was so damn loud.  And I was like “SHUT THE FUCK UP and let a bitch dance!”  I guess their purpose was to liven things up, but all they did was irritate me and suck the life force right out of the dance floor.  Last year I danced until my ribs cracked.  This year: Not so much.

THE MAIN STAGE — Hunter and Jessica make me happy.  They could stand on stage and do/say absolutely nothing and I would die laughing.  Margaret Cho did her thing.  People love her.  I personally have heard it all before, but her “My Puss” rap killed me — “My puss, is fine so I flaunt it. Your puss, is so old that it’s haunted.  My puss, make me all kind of money. Your puss, tends to smell kind of funny.”   Dominique Karan is a big woman with a big voice and she got big love from the big gays.  And speaking of big gays, BP Majors was exactly that: One big throwback to Andy Bell and Paul Lukakis, but grasping for David Bowie.  I missed Macy Gray and Estelle’s performance.  And I have a few choice words for the bitch that started a rumor about The Go-Gos and the B-52’s doing a surprise performance on Friday night.  LIES!!!

THE PROBLEMS — Then darkness sets upon the West Hollywood horizon and things get messy real quick.  Why do gay couples insist on going where single gays go?  Leave your boyfriend/girlfriend at home bitches!  You get insecure souls, add a bunch of horny, half naked gays, mix in some liquor and the stars line up for a fireworks display of disastrous proportions—“If you walk away from me and it’s OVER!  I mean it!  Lorenzo?  Lorenzoooo!”  One drunken queen yelled.  Then you hear a butch lesbie tell her lipstic lesbie girlfried: “The guy is gay!  GAY!  Leave him alone!  You can’t fuck him!” Fist start flying, and you get the gist.

You are bound to see the mighty fall–literally–on the pavement from not being able to handle their stuff.  There comes a point at pride when it’s time to clear out.  If the guys are cute, chances are they already found a cute guy to trick with before the witching hour.  You’re left with Trajica Jenkins in skanky, janky underwear with paws coming out of the darkness and trying to cop a feel of your crack or crotch.  I saw a Latin queena in a dingy jockstrap with a raccoon’s tail sticking out of his ass.  It looked like he had a serious loaf stuck to his butt.  And I’m sorry, but it was time to go home.

I can tell you stories…

Leave your boyfriends at home

I BELIEVE IN SLUTS DRAGORILLA SIGHTINGS IN WEST HOLLYWOOD CALIFORNIA