I BELIEVE IN SLUTS 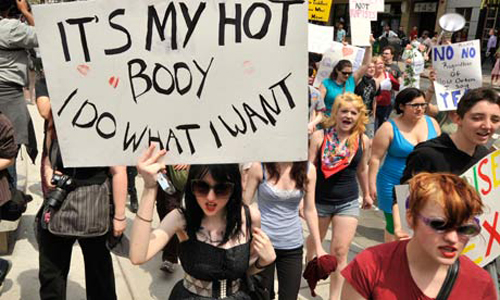 Two cop cars with spinning flashers pulled up alongside of me on Santa Monica Blvd and Huntley Dr.  Then I noticed the long mob of women marching down the street.  There was a loud roar of girls hollering and blowing whistles.  Was this a dyke march?  Were they drag queens/trannies from hell?  Was this some sort of joke?  Nope.  They were self-proclaimed  sluts.  I witnessed my very first SlutWalk LA. 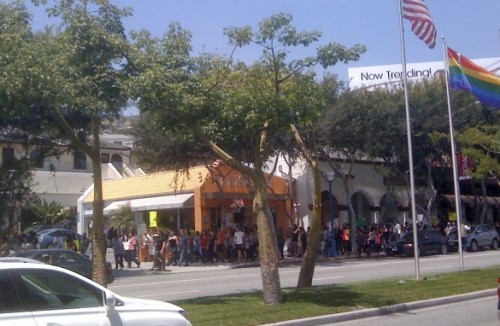 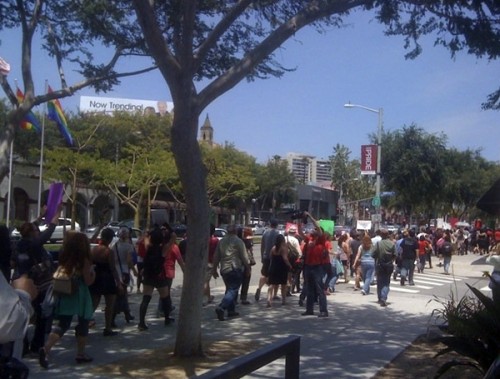 There was something about their anger that I found exciting–if not somewhat empowering.  Taking the word slut and scrawling it across your tits was very interesting to me.  I wondered if some shit went down on a high profile rape case that I was clueless about, cuz these women looked pissed off.

Turns out two officers were speakers at some safety forum in Toronto and one of the two assholes said something along the lines of, “Women should avoid dressing like sluts in order to not to be victimized”  Then some justice fuck in Canada presiding over a rape case suggested that the victim’s attire may have given the attacker the wrong idea.  The rapist was found guilty but he only got two-years probation.

BEHOLD!  A slut movement is born.  The first SlutWalk started in April of this year in Toronto.

The reaction to the slut march was equally interesting.  One heavyset parking attendant pointed at two not-so-attractive heavyset women and made some snarky remark about how those two women don’t have to worry about getting raped, but I’m willing to pluck the hairs from my left nut if this man doesn’t have a heavyset woman waiting for him at home (I’m just sayin’, who are we kiddin’ here?).  Some other Weho resident wondered why these women were marching in West Hollywood in the first place.  According to this ‘mo, Weho is the very last place where a woman is bound to get sexually attacked.  Then I heard this bitchy old queen make an interesting point about how the women in fishnet stockings and mini skirts are not the ones getting raped, “Those bitches know how to handle themselves” He said in essense.  “It’s the frumpy girls wearing the sweaters from The Comfort Zone that always fall victim to rape.”  Another guy said, that when it comes to rape, there are no victims, just volunteers.  And the SlutWalk LA rages on. 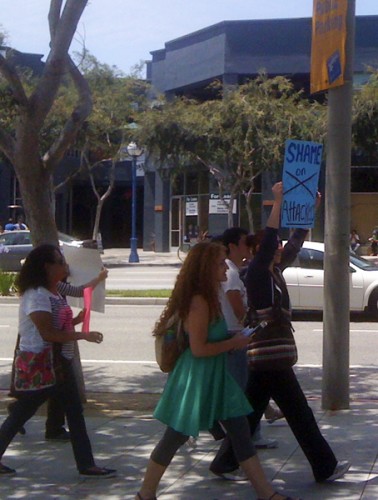 I was fascinated by the entire thing.  Taking the word slut and making it your own.  Telling fuckers to fuck off.  And getting in people’s faces with slut red lipstick, looked like a lot of fun.  The point is to get people riled up, get them pissed off, get them talking, and stop victim blaming.  I would totally be right there with ’em marching on the streets in nothing more than my  skimpy red underwear (you know the ones). 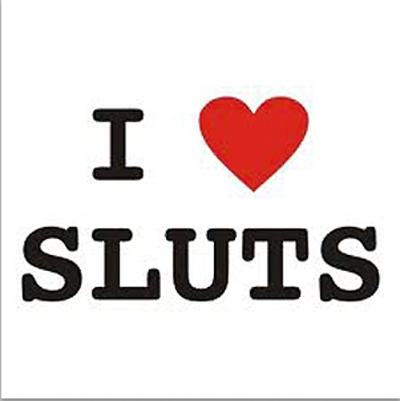