I know I’m not supposed to judge people for being dumb and stuff and junk—and Lord knows I try, but then certain supreme West Hollywood queens put me on the muthafuckin’ spot.

I tried to stay out of judgment when I passed a grown man crossing the street on Santa Monica Blvd and Westbourne Dr—and when say “grown”, I’m referring more to his growth and NOT his girth (grinning sweetly).  So this mega super duper grown man was dressed like a six-year old boy in a straw hat, a pastel-colored Polo shirt with the collar flipped skyward, rolled up Capri pants and flip-flops.  The look was not age appropriate, but then again, I ain’t got no kind of business calling people out on propriety when it comes to a dress code (cough-cough).

However.  This queen took tiny steps as if he were wearing a tight pencil skirt while he pushed a baby carriage along.  In that baby carriage there were two babies.  These babies were hairy with long snouts and they were tied to the carriage from a leash.  I’m referring to two dogs being treated like human babies and paraded up and down Santa Monica Blvd to the delight of similar dumbos passing them by—“Ooohh.  Isn’t that kewtttt”—which is exactly the point of purchasing a baby carriage when you ain’t got no kind of baby.  Is this a West Hollywood thing, or do grown men pass their dogs off for babies in other parts of the country? 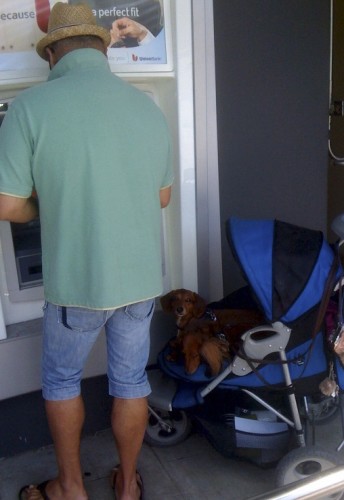 The City of West Hollywood strives to be the Humane Capital of the US, if not the world.   This is an animal cruelty-free type of town.  For example, the city banned the de-clawing of cats, pet shops are not allowed to sell pets in Weho—in fact the word pet has been replaced with animal companion and they’re currently working on banning the sale of fur within the city limits.  They are NOT fucking around.

Yet one look at these overly pampered pups in a baby carriage and I thought about another form of animal cruelty.  I’m referring to the type of cruelty that places a metaphorical pillow over the snouts of furry creatures everywhere.  That filthy pillow is covered with the intentions of unconditional love.  Some pets—err, I mean, “animal companions” are deeply loved, yet they never see the light of day because they’re stuck inside a stuffy Weho apartment while daddy is off to work from dusk to dawn.  Some animal companions get stuffed into pet versions of people clothes like a sweater or some other stupid getup, and then they’re forced to walk in public looking like some silly clown in Mortville—all so that daddy could comb the streets to get some attention—“Mira! Pos que cute!”  Some furry creatures are stuffed.  Literally.  Fat cats and fat dogs are not cute—OK, so fat cats are kind of cute, but a fat dog makes me sad.  Then there’s the type of animal cruelty that forces two dogs into a baby carriage, when dogs should be free…or semi free on a leash, marking their territory and sniffing some butt.  These two animals playing baby to some twisted queens fantasy really annoyed me.  They looked bored.  They looked confused.  And they looked sad.  WHERE is Rin Tin Tin when you need him to save the day!? 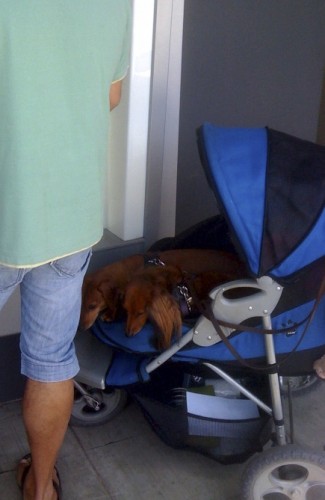 I wanted to snatch a leash and give this overgrown man a good lashing or two.  That’s another way to get people’s attention.

THEN…later that night (I swear I’m not making this shit up for blog’s sake), I was standing on the same fucking corner of Santa Monica and Westbourne Dr., when this fucker walked by with a poor cat tied to a dog leash (that’s the same ATM pictured above and below).  The cat was fat.  Very fat.  It was like a bloated dragonfly tied to a string.  It tried to run and pounce away from the people and bikes and the noise from passing cars, but a ball and chain kept it in place.  That fucker kept yanking on the leash and telling it to “Stay!  STAY!”  Then the #4 Metro bus made its usual stop on that corner with a robotic voice announcing, “Santa Monica and Westbourne Dr.,” and the poor beast freaked the fuck out—“Um…cute…” I told the owner with a frozen smile.  He beamed proudly while I crouched down to pet the poor puss.  It looked up at me with bewildered eyes.  Its fur was drenched with sweat.  I could see trickles of pee on the ground.  The cat looked tired.  It looked scared.  And it was pissed off like all hell.  Can we say cruel? 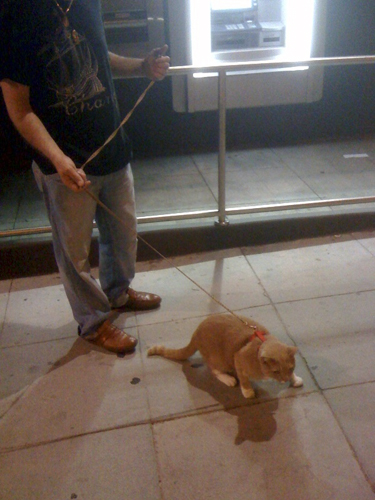 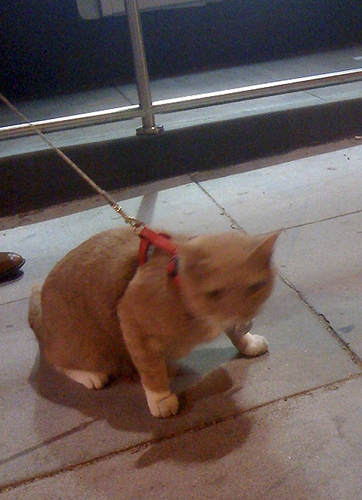 I wanted to beat the owner severely with the dog-turned-cat leash…with the cat still attached to the other end, so I could put it out of its misery.  But I took a picture instead.

I’m not the kind of guy who calls the cops, because there’s nothing worse than being a tattletale, but the next time I catch this supreme West Hollywood queen with this poor cat on a leash, I may have to give an anonymous tip.

Some people can be so stupid when it comes to their pets.