THE RAVEONETTES AT THE TROUBADOUR WEST HOLLYWOOD

You can tell my ass is  kinda/sorta…umm, “sweet”, cuz my ass has lived in the city of West Hollywood for way too many years than I care to mention, yet last night was the first time I went to the world famous Troubadour club to catch one of my favorite bands, The Raveoneettes, performing live (ooh, if I hear one more person call them the Raisinettes, I’m gonna...).  Their new album Raven in the Grave dropped last month and I’ve been beating that shit to mutherfucking DEATH!!!

The Raveonettes are this kinda/sorta like…cool Danish Indie rock band with a retro inspired sound that’s a throwback to the ’50s and ’60s.  They mix tow-part vocal harmonies (male and female, but the guy sounds like a girl) and add dirty hard-edged guitars that distort into a screeching static feedback that makes my skin crawl (in a good way).  But I mostly like them for their dark lyrics which combine love, loss, lust, sex, betrayal, drugs, crime, murder, suicide and other themes that tap into my inner teenage girl angst.  The lead singers are Sune Rose Wagner (that would be the odd-looking boy, believe-it-or-not) and the beautiful Sharin Foo, who makes up for her somewhat weak voice by looking like she jumped out of a vintage Vogue mag. 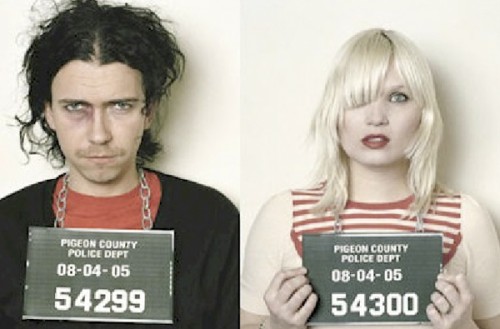 My first impression of the insides of the Troubadour is that of a recovering drug addict.  You get the sense that there was a lot of drug use at this club.  I’m talkin’ about the dirty kind of drugs.  This is the place where Janis Japlin partied the night before they found her dead at some seedy hotel, for fuck’s sake.  Yet cut to today, and the heightened security is like a box of condoms at a bareback party (meaning it ain’t the same), however this vintage joint still reeks of a serious OD.  I don’t know if it’s the old dark wood or the various photographs of Rock legends, but the place triggered me to wanna do a bump of a lil’ sumthin’-sumthin’…just to make a point—Alas…(sigh) to do anything harsher than some form of medical marijuana would be a total cliche.  You could smell the pot, but you couldn’t see it; that’s because people were digesting it via brownies, popcorn, gum or whatever other shape Maryjane has morphed into these modern days (again–ain’t the same).  Today the only smoke you get inside the Troubadour is the fake kind that comes out of a smoke machine to give the stage some kind of edgy effect thanks to a smoking ban in West Hollywood (what is it not?  The same!).

I’m sure I walked past The Troubadour plastered out of my mind many times, but I never actually partied inside this place.   That’s because–unlike the world famous House of Blues on Sunset Blvd, which lent its space to the gays on the last weekend of every month waaayyy back in the day–The Troubadour has never gone gay-for-pay (unless you count Elton John playing there back in his hetero Hey Days).

I ran into a guy who had seen the show several times already. He warned us that the show was loud.  Dangerously loud. “Some people use earplugs,” the guy mentioned, “But those guys are  big pussies.  You have to catch the show in the raw.”

I quickly realized that the stage took up a lot of space at the Troubadour.  It was close to the bar.  Dangerously close.  It didn’t matter if we went upstairs, or to the far back of the room, it felt like you were all up on the drum sets and the three electric guitars.  I fought a suffocating GULP.  Then I noticed a sign that read “EARPLUGS ONLY $2”.  It was a total rip-off—how EVER…dare I pussy out and purchase myself a pair?  Earplugs were the exact opposite of anything Rock-n-Roll, but fuck-it, when my friend leaned over to get himself a drink, he made the mistake of asking me if I wanted anything.  “Earplugs, pleeeeze.” I told him with a thin wavering, cringing smile (EMBARRASSING!).  He shook his head, but I got my $2 ear protectors–I’m sorry, but my ass is already blind as fuck.  I don’t need to add hard of hearing to my ailments. 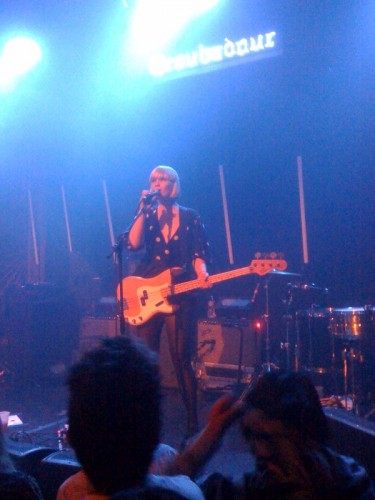 The band quietly walked out, took their positions, said a shy–almost awkward hello, and then they busted out with the song “Recharge & Revolt,” which transferred over well as a live number.  It was loud, but not painful.  Then—I think around the third song–Sharin motioned something to someone in the control room.  That’s when the volume went up several notches.  The scratch of the bass guitar almost blew my bangs right off of my forehead.  Eyes became tight all around me, but everyone stood their ground and stiffly bobbed their heads to the sound.  It gave a new meaning to the words “Dead Sound”–another one of their songs.  I was gonna rough it in a futile attempt to maintain my cool—fuck the earplugs—but that shit was obnoxiously loud, which was kind of dumb, cuz you couldn’t even make out what they were singing.  It felt like someone was boxing my ears in.  My brain felt gooey, like it would ooze out of my nose.  I fished for my earplugs feeling like a swollen va-jay-jay.  I folded my arms nonchalantly.  I scratched my chin.  Then I ran my fingers through my hair.  I swiftly jammed those fuckers deep into my skull, you swore I was a ninja.  It felt like I had these giant corkscrews sticking out my head, but I didn’t give a shit (much).  The plugs completely altered the experience.  Gone was the screeching feedback.  I was left with the vibrations of the bass pounding against my chest.

I looked around to see how others were handling the sound.  Was it just me?  But up on the VIP balcony, I noticed an elderly couple sitting side by side.  This was an odd venue for senior citizens.  The white-haired Rock-n-Roll granny held her place, which made me suspect she was packin’ earplugs of her own.  However, the little old man crumbled sideways, looking like he would collapse, while he cupped both sides of his head to stop his eyes from vibrating.  I could make out a scowl on his face.  I felt his pain.  And in turn I felt old.  It was sad.  So I took a picture (evil grin). 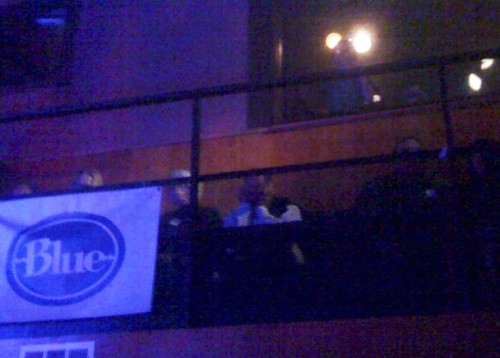 THE SHIT WAS LOUD!!!

Those standing near the front of the stage gradually pulled back, which was fine by me.  I could inch dangerously close without damaging my hearing.  By the time they did “Aly, Walk With Me”–a fan favorite–for a finale, the floor was noticeably less crowded.  For some reason “Aly…” started on the wrong note, or something was off, which didn’t feel intentional.  It didn’t matter though, because at this point ears had to be ringing all around me.  I’m surprised I didn’t see people walking out with blood trickling down their necks.

I pulled out my earplugs with deliberateness when the show was over.  I’m sure my ass looked “sweet”.  But it was the best $2.00 I ever spent.  No lie.

Anyway, the band is The Raveonettes and album is called Raven in the Grave.  You MUST run out and buy their record.  And by Record, I mean CD–err, I mean MP3.  And by “buy”, I mean download.  It’s what all the kids are doing these dayz.

PS: Below is a timeline of The Troubadour that I stole from their website (troubadour.com), which I found interesting.  The place was full of debut from acts that would explode into huge stars, to final performances from huge stars before their inevitable fall.  Check it out if you have a free moment.