CUTIE DISCOUNT AT THE ARCLIGHT THEATRE 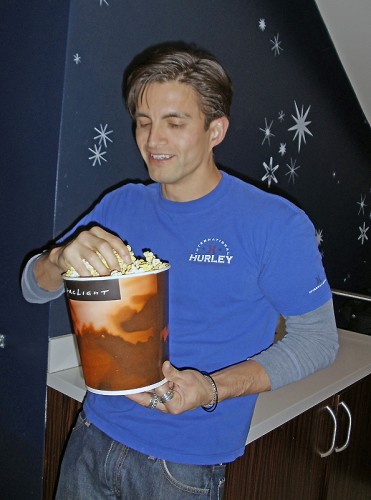 I worked as a crew member at The Arclight Theatre in Hollywood four years ago (home of the world famous Cinerama Dome).  I was doing um…”research” back in 2007 for a book that I’m forever writing (meaning my ass was in rehab and part of the recovery process was being forced to pop popcorn to humble me and steal my sparkle).

Needless to say being a worker among assholes sucked major nut sackage–especially the kind of work that deals with wound up customers who want to be entertained.   Add a ridiculous price to a bucket of buttered popcorn or a microwaved hotdog and you’ve got the perfect storm for some mean muther-effers giving you some major ‘tude.   It didn’t help that my co-workers were super stingy with the popcorn.  My fellow crew members would get into fights with the customers over an extra scoop of the junk.  The system was set up so that soda refills were unheard of, and if you spilt it, dropped it, or lost it, you repaid for it.  Then the rations of leftover popcorn was stuffed into a big-ass trash bag and taken to a dumpster at the end of every shift.  I guess it was all in the name of a job well done, but The Man didn’t give you so much as a pat on the back for every dollar made or saved.

I used to be a paying customer at this theatre before shit hit the weed whacker back in the day, so I had a little empathy for certain customers who limped away from my register feeling freshly poked.  It was interesting being on the other end of the stick, but I decided to give The Man the finger and stick it to him instead.  I came up with what came to be known as The QD system, which was code for The Cutie Discount—Yup, you guessed it; if you were a cute guy you got free popcorn, a free soda and other discounted snacks whenever you stepped up to my register.  I usually saved the QD for cuter straight guys who never saw it coming and then looked embarrassed after they realized the discount was based on their good looks.  Seeing a straight guy blush as he reached for his container of caramel corn at half price was better than any pat on the back, let me tell ya.

My idea of “cute” was/is interesting.  It’s not the traditional (predictable) perfectly shaped and pretty-faced guy striving to be a model that one always encounters on the hip side of Hollywood.  Pretty guys like that–straight or gay–never seemed too surprised whenever I gave them the QD–in fact, they sort of expected free shit because I imagine free shit comes their way quite often.   They were also not the most gracious of the bunch.  It was as if they were doing me the favor by gracing me with their beauty.  It made them less cute—Nope, the QD was mostly reserved for the attractive man who looked a little sexually anorexic because he didn’t have too much game and didn’t seem too aware of his good looks.  Good looks are relative.  Sometimes all they had going for them was a nice smile or pretty eyes.  I generally went for the guy with the friendly naive demeanor and a weird twitch.  I don’t like them too perfect.

Cute gay guys were a whole different ball game.  I was very cautious about giving a pretty gay the QD, because pretty gays can be QC (as in quite cunty).   I didn’t like a gay guy thinking I was crushing on him.  And more likely than not, a gay guy would run to his friends with some exaggerated story about how some loser at the snack bar made a pass at him with free popcorn (that’s how we do).  I’m not sure I would give me the QD if I had me as a customer, but mostly because I had inside information on the dark forces that were at play at the time (pretty, pretty?)

The Cutie Discount was empowering, while I was in a fucked up and powerless situation and it made some people happy, but there were managers all around me who would be less than thrilled by the free popcorn situation, so I had to be careful.  This is why I rarely gave the QD to unattractive people, because they never knew how to handle the kindness of strangers.  The average looking man or woman (usually going to the movies alone) would thank me profusely and very loudly for “hooking” them up.  It was sweet, but also very stupid.  “Ssshhh, not so loud,” I hissed at them with a clenched smile for the cameras right above me (bubble trouble).

Then one night I gave someone a free water bottle.  The guy was so handsome and nice that he distracted me from the two managers standing in the lobby to my right.  I saw them looking right at me as the cutie walked away with a happy smile.  They were leaning toward each other, clearly discussing me.  My heart sank to my groin area, but I just beamed at the cameras above.  Getting fired from a place like this would suck major nut sackage and it would give a whole new meaning to the words ROCK…BOTTOM!  I would simply DIE of embarrassment.  So the next day I was called into the office (NO!).  Both managers were standing there with poker faces intact (not good).  I was gonna play the dumb card and swear I thought I had charged the guy for the water, but I didn’t get a chance to get defensive—“We called you in here…” one of the managers started, “to CONGRATULATE you for being the top employee of the week who covered the three points of excellent customer service.”  I didn’t know what three points they were talking about.  All I could do was eat shit when they handed me a gift certificate for Amoeba Records next door.  I never saw the pat on the back coming.  I DIED of embarrassment.

I’m not saying I never gave a random free re-fill here and there or a generous amount of popcorn, but that Amoeba gift certificate pretty much ended the Cutie Discount (sorry boys).  It taught me to be a humble worker among workers.

I stopped working there a long time ago.  I’m back as a paying customer at The Arclight Theatre.  And don’t think it gets past me for a second that I pay full price, plus tax at the snack bar every…single…fucking…time. 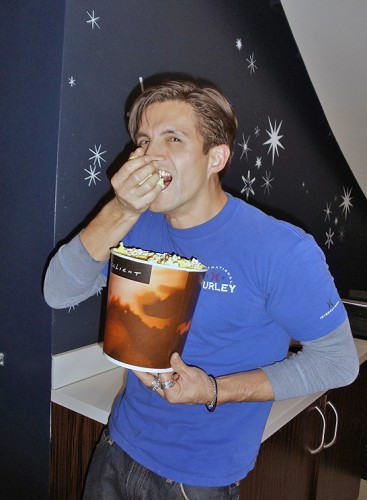