I have written several articles about sobriety in the hopes to inspire and attract rather than promote.  Below is my latest lil’ ditty that was published for The Fight magazine this month.  I hope you like it.

My name is Paulo and I am a recovering alcoholic/addict.  It’s a cringe-inducing introduction that took some getting used to, but I can’t deny the mountain of undeniable evidence that kicked my ass and then kick-started my bumpy road to recovery.

The bumps on the road were my own doing.  I can’t remember when I took my first drink, or my fist puff of weed, but I do remember my first hit of coke.  I swore I was cute when I dipped into a baggy inside a bathroom stall of some Weho dance club in the crazy summer of 1995.  The drugs were glamorous and fun back then.  I was not out to destroy myself. The DJ made me do it; I wanted to dance my ass off all night long.  Of course, the coke led to more drinking that summer; and more drinking led to crystal meth.  Special K, G, E and other letters in the alphabet soon followed, but meth was my drug of choice because I had the energy to dance for days.  Of course meth brought me to my knees, making it impossible to dance.  It was all about meth sex, drug deals in back alleys and crawling out of gutters for yours truly.  My life became one big cliché.  Then cut to me dialing 911 eleven years into it after a drug-induced panic attack, which I swore was a heart attack or a stroke.  Shortly after I found myself at the footsteps of The Van Ness Recovery House desperate for help and hurting pretty badly.  .

I was done.  January 10, 2007 is my clean and sober “birthday”.  That’s four years of continuous sobriety for yours truly.  I couldn’t get more than four days towards the end, so four years is huge deal for me.

Getting sober was a lot like coming out of the closet.  I was powerless over being gay and I became powerless over drugs and alcohol.  The feelings of despair, loneliness, denial, self-hatred, fear and unbearable shame were the same.  I had to surrender and accept the fact that there was nothing to be ashamed of.  I was not alone.  I had to accept my addiction the same way I accepted my homosexuality.  It took complete, total and utter surrender.  Only then can a new life begin.  They call it taking the first step. 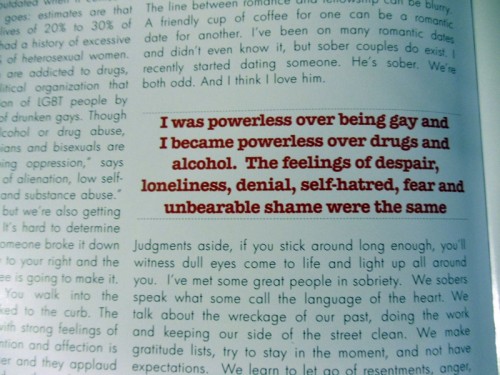 The data is limited, if not outdated when it comes to homos in recovery, but here goes: estimates are that substance abuse affects the lives of 20 to 30% of homosexuals. 35% of lesbians had a history of excessive drinking, compared to only 5% of heterosexual women.  30% of lesbians and gay men are addicted to drugs, according to Soulforce a political organization that advocates against the oppression of LGBT people by religious institutions. It’s a lot of drunken gays. Though homosexuality doesn’t cause alcohol or drug abuse, “As a minority group, gays, lesbians and bisexuals are victims of systematic and ongoing oppression,” says Soulforce. “It can lead to feelings of alienation, low self-esteem, self-destructive behaviors, and substance abuse.”

Gays may be prone to drinking, but we’re also getting clean and sober in big numbers.  It’s hard to determine how many actually stay.  The way someone broke it down for me was simple: Look at the guy to your right and the guy to your left.  Only one of the three is going to make it.

Early sobriety is interesting.  You walk into the rooms of gay recovery feeling kicked to the curb. The isolation from doing drugs comes with strong feelings of disconnection.  The hunger for attention and affection is painful.  You identify as a newcomer and they applaud you.  Smiling faces reach out, introduce themselves and hug you.  Men ask you for your name and phone number. For the most part, they don’t want to screw you, so it’s confusing realizing that a simple hello means simply that: “hello.”  The clapping and the “you can do it too” bumper sticker slogans were grating in the beginning.  They made me angry.  I distorted the faces all around me by picturing them drunk—“Eeewww!”  But they opened their arms to me anyway.  They said they would love me, until I learned to love myself.  I kept coming back.  And then one day their love didn’t make my skin crawl.

Bar mentality has been stitched into the fabric of the gay experience.  And the thread does not end in the rooms of gay recovery. Some sober gays never outgrow the need for gossip, drama, attention and the race for popularity at the bottom of the barrel. Grown men behave like silly girls in recovery, same as they do at the bars.  We get some cliquey queens.  They are the who’s who of who cares grasping for the homecoming crown at a Straightjacket Prom.  The views on hierarchy in the recovery community mostly depend on your insecurities.  Good looks are a plus; and if you did porn, even better. But sober time tends to determine the chain in command, because ten years looks and feels a lot better than ten days.  Remember that we addict/alcoholics are sick people trying to get well, not bad people trying to be good.

I had my heart broken in recovery and I swore I would never date in the sober rooms again.  Looking for love in a roomful of sick people can make a hot bed for the mentally insane, but it’s nice to have a common ground.  About finding a boyfriend in the sober rooms, they say the odds are good…but the goods are odd. The line between romance and fellowship can be blurry.  A friendly cup of coffee for one can be a romantic date for another.  I’ve been on many romantic dates and I didn’t even know it, but sober couples do exist.  I recently started dating someone. He’s sober.  We’re both odd.  And I think I love him.

Judgments aside, if you stick around long enough, you’ll witness dull eyes come to life and light up all around you.  I’ve met some amazing people in sobriety.  We sobers speak what some call the language of the heart. We talk about the wreckage of our past, doing the work and keeping our side of the street clean.  We make gratitude lists, try to stay in the moment, and not have expectations. We learn to let go of resentments, anger, and we make amends wherever possible.  We are of service and try to help another alcoholic stay sober.  We strive for progress, not perfection.  We suit up, show up, and stay clean and sober one day at a time. And of course we ask God for the serenity to accept the things we cannot change, the courage to change the things we can, and thewisdom to know the difference.

Do I regret some of the things I did in my addiction?  Hell, I still make mistakes in sobriety, but I try not to dwell on morbid reflection.  It took what it took to get me where I am today and I swear I love the life I live, so no regrets.  I’m happy to be clean and sober and grateful for the people, sober and non-sober who helped me trudge the road to happy destiny—Oh yeah, “you can do it too.”

Having sex with someone newly sober, who wouldn’t normally give you the time of day.

Celebrating continuous sobriety after sucking on a cocktail or tripping and falling into a baggie.

It is tweaker who combs his carpet for tiny particles of meth.

4. What do sober people do for fun?

They stand in a circle and stare at each other.

5. What’s the difference between a sober birthday and a sober anniversary?

Sober sex can suck at first.  You basically start from scratch, but practice can make you an awesome lay.

Sober people can date whoever they want.

8. Do people switch from one addiction to another?

9. Can you have an occasional glass of wine like normal people?

Nope. There’s no such thing as an occasional glass of wine.

10. When is a good time to get clean and sober?

If you start licking the mirror and you keep checking your panties after a blackout, it’s seriously time to quit. 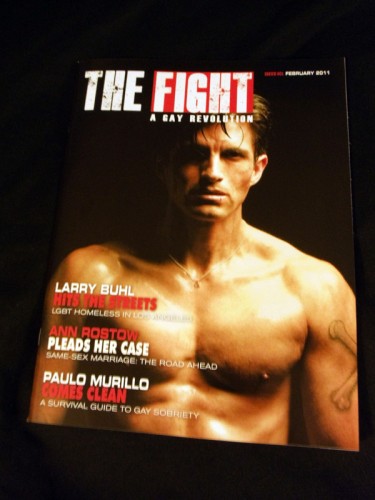