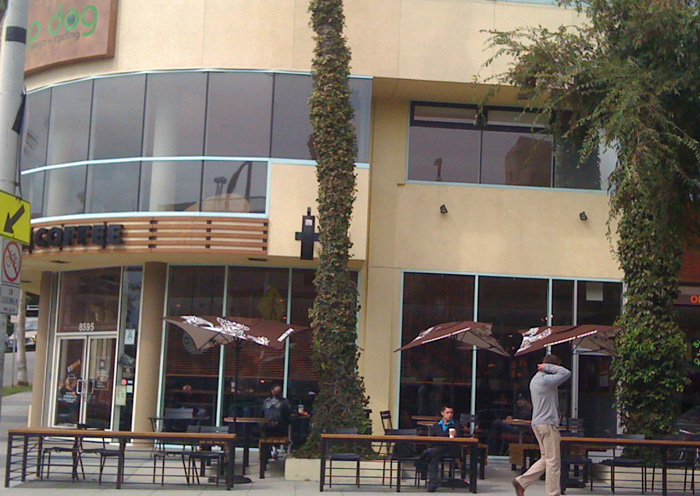 Turns out the newly improved Weho Starbucks opened its glass doors last week with little to no fanfare after being closed for improvements for several weeks.

Some of you know this particular corporate coffee joint as The Starfucks. Some of you get cute and call it The Gaybucks. I have always known this mothership location as the Weho Beach, on account of the shameless shirtless sunbathers that like to put their pecs on display for the moving traffic on Santa Monica Blvd when warm weather allows it (yet another Weho exclusive).

I walked into the brand new Starfucks/Gaybucks/Weho Beach for the first time the other day with high expectations, knowing all too well that expectations are bound to lead to disappointments. And my bottom lip hit the floor. There’s no room for kindness here people. The new Starbucks SUCKS salty sweaty huevos. I HATE IT!!! I can’t exactly say the old raggedy Gaybucks setup was cozy and welcoming, but the new Starsucks has been transformed into something that resembles a pretentious and very generic airport terminal. Sterile doesn’t even begin to slice and dice it. It is impersonal to the extreme power. It screams waiting area in one of those modern office buildings that become outdated after a few months. That’s right, it is the exact apposite of anything remotely comfortable or cute. 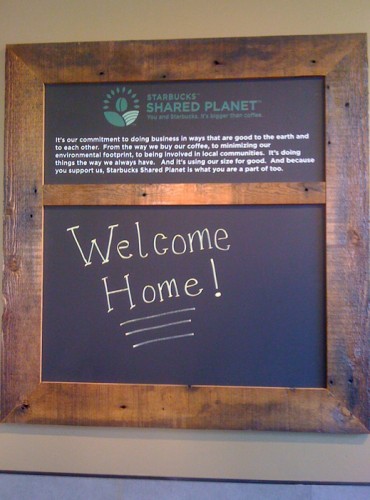 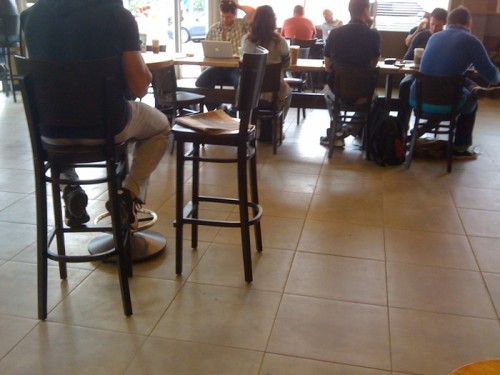 I get the message loud and clear when I step inside—“Pay! Pay! Be on your way…you faggots (OK, so I’m being overly dramatic about the “faggots” part)!”

“I don’t like it,” I immediately announced obnoxiously when I stepped inside to meet a friend for a cup of Joe. I don’t like the long table with the computer jacks that has been smacked into the center of the room—NOT that I would EVAH be caught dead sitting at this table pretending to be writing the next best American novel, while surfing Grindr/Adam4Adam, mind you (I can pretend to be writing my book from home thankyouverymuch). The table is way too thin, so people are all up on each other’s faces, and there is no sense of privacy on account of you’re smack in the center. It’s like they found the answer to get rid of all the unemployed riff-raff that camp out at this place every day as if they were there on a nine-to-five gig. 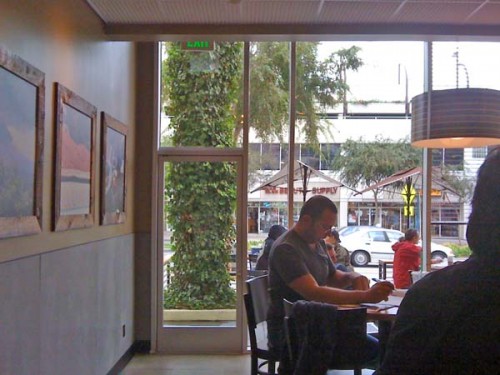 The big plushy couches are gone. The floor is now littered with these tall tiny tables that fit two tiny stools. You look around at all the wasted space and wonder if the joint turns into a dance club at some point. Then you have the row of dainty tables-for-two that line up against the opposite wall, but people with laptops who want a little privacy monopolize those, which is royally lame.

Then there’s the new patio setup, which really burns my hole UP! GOODBYE WEHO BEACH!!! HELLO WEST HOLLYWOOD CORRAL!!! You used to get a bunch of shirtless, jobless hotties slouching on their chairs with legs spread wide apart, letting it all hang out while basking under the sun. Now you get a bunch of confused gays that have been fenced into this confined patio space—and speaking of confusion, can we talk about those silly arty farty umbrellas? They appear to wanna scream “fancy gay,” but all they manage to blurt out is “Stoopid gay with stoopid taste.” These parasols are shaped funny. They only open halfway, so all they shield is the top of your head. And they twirl with the breeze, so your head isn’t covered for too long. Then there’s the dumb counter space that faces right out onto the open street, which I find totally ridick (as in ridiculous). You’re basically sitting on the sidewalk, so if you want some car fumes with that cup of Joe, then that’s where you want to sit. The new Weho Corral makes me so damn mad!

There is only one redeeming quality to this poorly designed coffee joint that I can think of at the moment: The coffee they serve still beats the morning lights out of The Coffee Bean (I can’t think of anything clever or bitchy to rhyme with “bean” on the fly). The Bean may have them beat with the pastries (Starsucks serves their pastries fresh out of the fridge), but The Bean coffee is weak. Ask anybody. 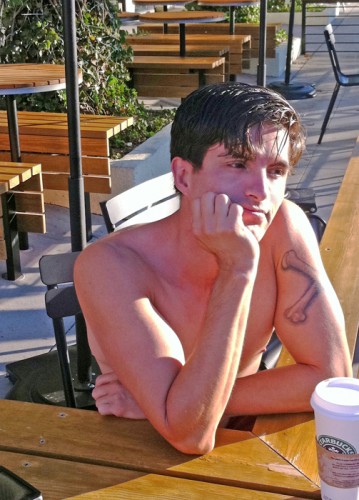 I say go back to the old drawing board, but that’s not bound to happen for probably another ten years. Alas…the Venti Bold leaves me no choice. I’ll pay. And be on my merry way.

What’s your take on the newly designed West Hollywood Starfucks? Do you love it? Or do you wanna leave it?