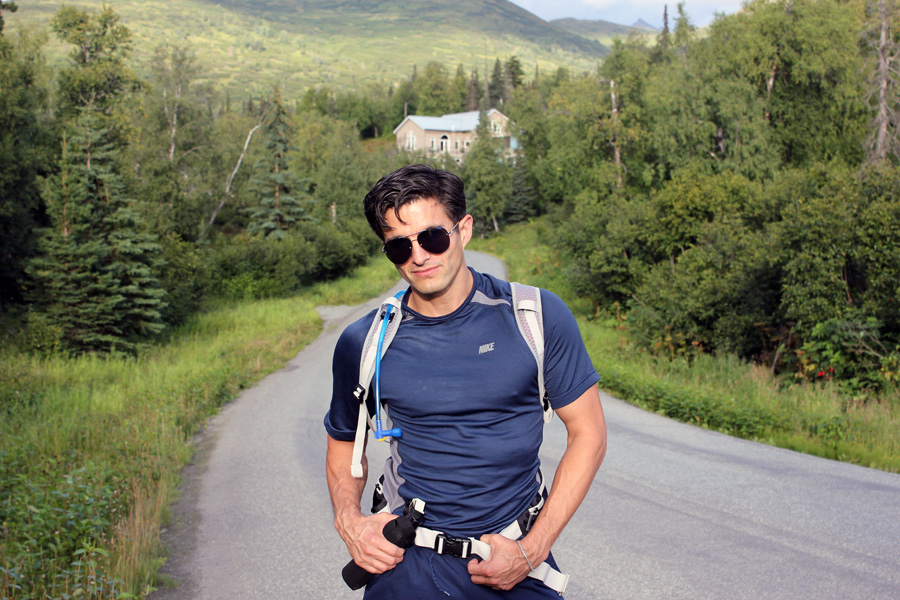 The hike up Near Point Peak is supposed to be this pussyfied trail as far as Alaskans are concerned, but this is no-run-of-the-mill Los Angeles Runyon Canyon hill.

By the time Joe and I stepped outdoors, I was armed with extra clothes, water, food, a headlight, and a can of mace to ward off bears. Joe armed himself with a loaded .44 Magnum Swiss & Wesson Revolver. I was hyper sensitive of that loaded gun, which dangled indifferently from the side mesh pocket of his backpack. The gun has no safety lock—“If I’m down for any reason, this is how you shoot this gun. ” Joe handed me the piece. The weight made me queazy. “Just aim this red dot at your target and pull the trigger really hard like this…” I could see the bullet heads peeking out of the revolver. Umm…what exactly did he MEAN by “if I’m down”?

Bear attacks are a common thing in Anchorage. A grizzly bear mauled a woman and her daughter not too far from where Joe lives. It turns out bears also eat moose if they can catch one. And here I thought bears ate honey from a cute little jar that’s shaped like a beehive. Black bears are also a common threat, but they’re not as deadly as the brown grizzlies. “If it’s brown lay down, but if it’s black, fight back,” Joe gave me some survival tips (and if it’s yellow let it mellow, but if it’s brown flush it down). You’re supposed to lay on your stomach with your hands protecting the back of your neck and your legs spread eagle style so a grizzly can’ flip you over to claw your guts out. You can pretty much throw a rock at a black bear to send it on its way, which is kind of funny, cuz I tend to freeze when I see a bear at the Faultline in Silverlake, regardless of its color.

The Near Point hike is literally in Joe’s backyard. That means you can get your head ripped right off by an overgrown grizzly while you step outside to fetch the morning paper—in contrast, if you step outside my backyard in West Hollywood, you’ll find a cute little Starbucks and a 24-Hour Fitness gym, which I feel is how nature intended.

We also armed ourselves with a Cannon professional camera to document the entire experience and braved a walk up the road. My look was tight and tough in some aviator shades and some of Joe’s sporty threads; however the look sort of collapsed after a few miles of walking over dung, puddles, brush, roots and all sorts of other nature crap. My hair went flat and my eyes stung from the salt of my sweat in no time. It was NOT a good look.

Nature has a way of making city life seem so trivial. It was nice to get away from the hustle and bustle of my L.A. la-la life. I could not help but reflect on all the meaningless drama and bullshit that’s been eating away at my life force and wasting all of my time. Energies definitely need to be redirected at the home front. There are friends that need to be appreciated, and family that needs to be revisited, and work that needs to be tended. Life on the run is the avoidance of life in the worst way. And yet nothing gets done when there’s so much to DO! I vowed to re-prioritize my shit when I went home. Assuming I made it home. 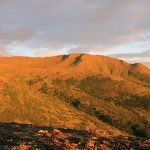 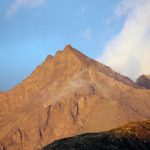 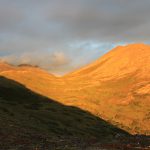 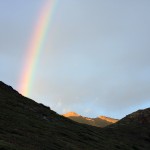 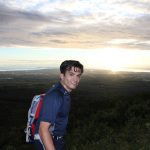 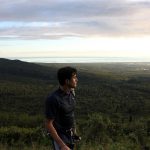 For the moment I just wanted to enjoy the nature—“Wow, Joe, WOW!” I kept shouting behind him like a city slicker whenever we reached a new plateau that revealed a whole new splash of greenery. We found a perfect rainbow hidden behind Half Point, which arched around the Alaskan mountain range. Then we reached a wild blueberry field where the setting sun kissed the entire scenery with rays of goldenrod. It burned my skin; it lightened my hair and brightened my eyes—“AAHH! Take a picture, take a picture!” 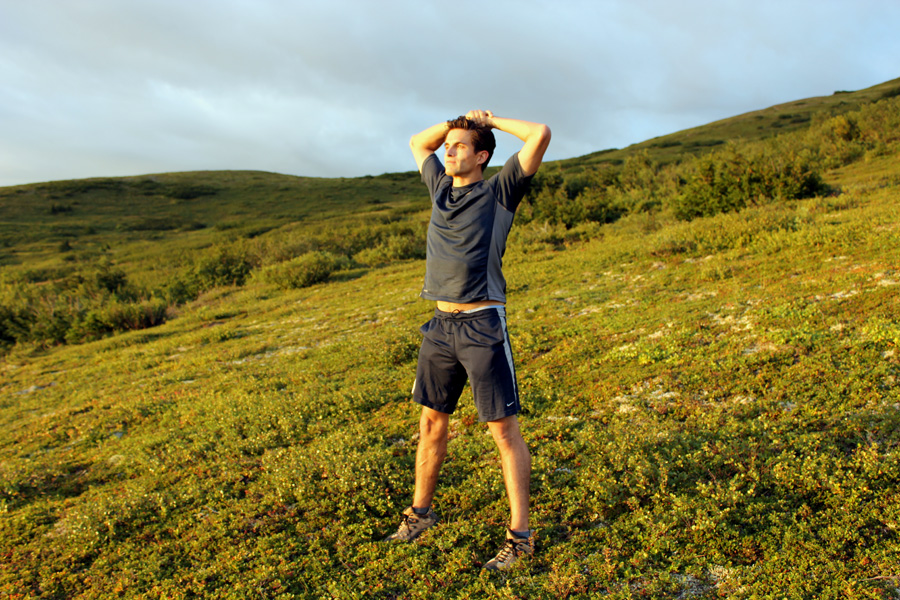 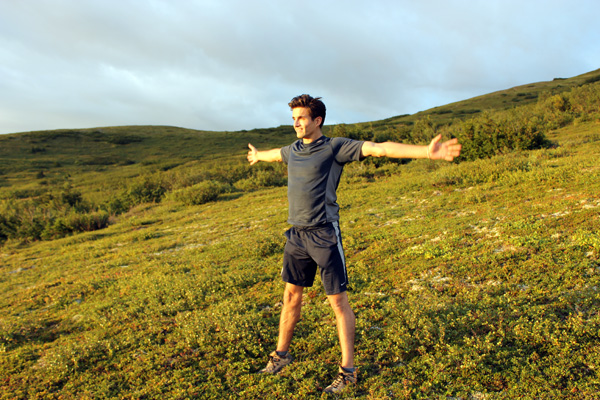 Joe started picking blueberries off the ground and eating them. He warned me not to eat the blackberries. He offered me a handful of these wild blueberries, but fuck all of this natural shit! I saw the movie “Into the Wild”! My ass was not about to eat anything from the ground that has not been properly sprayed with pesticides and injected with artificial colors and flavors. He warned me that bears love berries. Some people get so caught up in picking berries that they suddenly bump their heads against the hind leg of a big grizzly. Then human limbs fly all over the place and the scenery becomes a big bloody mess. I’m sooo not loving bears on this trip.

By the time we reached the very top of Half Point it was dusk and the temperature dropped about fifteen degrees. I was all wet down there, so my underwear got cold real quick. Still, I ripped off my shirt and did a little victory dance for making it to the top, which resembled a circuit boy with my hands way up in the air. I couldn’t help it. The view was amazing.

The hike down was a whole new challenge. A sheet of pitch-blackness crept over us. Joe wrapped a headlight across my forehead. The tiny flashlight cast the scariest shadows everywhere I looked. This happy trail was turning into a trail of terror that was straight out of The Blairwitch Project—“I. Am. So. Afraid.”

“This is the best part.” Joe explained. “You become one with your fears and you overcome it. Just be careful. If you see a set of red glowing eyes, freeze.”

I slipped and slid down that mountain, tripping over rocks and protruding roots, running into trees, and shooing at creepy shadows the entire way down. It was like a scene from a Friday the 13th movie. Bears were lurking all around, judging from the bear shit I kept stepping into. I held my can of bear mace in front of me, but I could’ve been holding a can of hairspray for all I knew. The situation was the exact opposite of anything remotely cute, but we laughed the entire way down…mostly to sike myself out of being scared and scaring away any of the wildlife.

We got home a little past midnight. Between the funeral and the hike, I have to admit that the day was pretty amazing. My poor ass cheeks are killing me, but I feel great. It’s off to bed. Tomorrow we hike up a place called Hatcher Pass.

ALASKA – DAY 1: 2 GAYS IN A FUNERAL THE GREAT OUTDOORS