I freakin’ LOVE it when I find cash stashed inside a pair of dirty old jeans while I’m doing laundry. it’s like finding free money even though it’s still coming out of your own pocket.

A bill fell out of the pair of shorts that I wore to gay pride (laundry is waaayyy overdue). All I saw was a flash of green with the number one, followed by a zero, which led me to believe it was more than a measly dollar. YES!!! However, upon closer inspection, I realized that I had been HAD! It was a million dollar bill. It had all the unique markings of US currency, but the bill was a fake, a fraud, the entire thing a rotten, filthy lie. NO!!!

It burned me up even more to find that it was nothing but Christian propaganda disguised in counterfeit paper. There was a message in fine print circling the outer edges of the front of the bill, forcing me to squint and read carefully. The message went along the lines of:

“The million dollar question: Will you go to Heaven? Have you ever told a lie, stolen anything, or used God’s name in vain? Jesus said, ‘Whoever looks at a woman to lust for her has already committed adultery with her in his heart’. If you have done those things, God sees you as a lying, thieving, blasphemous adulterer-at-heart. The bible warns that if you are guilty you will end up in Hell. That’s not God’s will. He sent His Son to suffer and die on the cross for you. Jesus took your punishment upon Himself: ‘God so loved the world that He gave his only begotten son, that whoever believes in Him, should not perish, but have everlasting life. Then he rose from the dead and defeated death. Please repent (turn from sin) today and trust in Jesus, and God will grant you everlasting life. Read your bible and obey it.”

Fuck me up the ass for saying so, but there is something sooo morally wrong about using fake money to spread the Lordie Lord’s message. There is something so sneaky about using a cute white guy to infiltrate a gay parade and spread play money that demands you to “read your bible and obey it” or else burn in hell. There’s something so humanly arrogant about the idea that we can defeat death and have everlasting life on the condition that we believe what others believe. I guess it’s also kinda/sorta wrong that the cute guy is the only reason why the million dollar question ended up in my pocket in the first place (gulp).

What happened to the good old days when religious freaks walked around at pride festivals with a blank smile and passed around little comic strips that told tales from the dark side of a person telling lies, stealing and cheating, only to end up in a drawing with flames licking the man‘s nude body in the fiery pits of hell? I found those very effective–not that it ever forced me to put some clothes on and change my behavior at a pride festival—“Who wants to fuck!? Woohooo!!!”
And what’s the point of the “God Hates Faggots” protesters at pride at this point? The turnout was all of 8 God-loving homophobes. They looked more sad than angry. They actually made me sad, not angry. They stood there being completely ignored. It’s over. Let go. Go home. 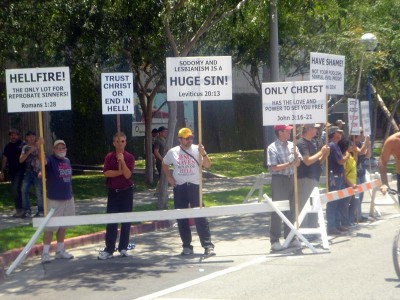 My impulse was to rip the counterfeit $1,000,000 bill to confetti. Instead, I decided to fold it back up and step outside. I dropped it on the sidewalk outside my place. Somebody was bound to trip over it. There are plenty of sick fuckers in my neighborhood who need to be saved. That’s right, I’m saving souls.