STICKY BUT NOT AS SWEET 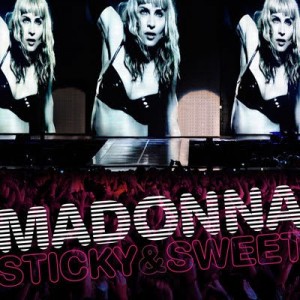 Madonna’s Sticky & Sweet Tour DVD/CD came out April 2nd, but I barely got it today, two weeks after it dropped. I didn’t even pay for it. It was a promo gift from a friend. It turns out the concert was also broadcasted on VH-1 days before the DVD was released and I completely missed it. There was a point in my life and in her career when this kind of shit did NOT happen.

Remember when a live broadcast of M’s concert used to be THE main event? “Madonna! Live! On HBO!” Viewing parties were thrown. It was the closest thing to seeing her live for those of us who weren’t savvy enough to pitch a tent on the streets to buy a ticket and those of us who simply couldn’t afford it.

I eventually became computer savvy and scrounged enough chump change to finally see the real deal in person. Not to brag (maybe just a little), but I caught The Drowned World Tour twice. It was right after 9/11, so she was NOT in the mood. I starved and witnessed Re-Invention Tour 6 times, because I HAD to see it from every angle. I even flew to Miami to catch the last two shows in the states, which was stupid and crazy. I swore it would make me a better person, but of course…it did not. Then I hit up Confessions Tour 4 times—the last time I was 3 rows from the main runway at Madison Square Gardens…I was fixing feelings. However, my priorities took a dramatic shift by the time Sticky & Sweet came to town. I caught it all of ONE time in Los Angeles. It was a comp ticket from a friend who’s in the industry. I was four rows away from the main stage, which means I mostly saw the back of her head while she performed at the far end of the runway. We sat in traffic for over 2 hours trying to get to Dodgers Stadium, but that’s OK, cuz she started the show two hours late. It turns out the bitch was stuck in traffic also.

Of course The Sticky & Sweet DVD delivers all that is Madonna. The music has been revamped and the backdrop visuals are super tight. My favorite Sticky moments have to be the techno induced of Like a Prayer and the rock version of Hung Up. And she can do no wrong where Vogue and Music are concerned. I still prefer less guitar and more virgin material. And hearing her call the crowd “motherfuckers” is cringe inducing. I also can’t stand that it plays more like a music video than a concert experience. The cameras jump around every two seconds, so you could be getting spliced and diced concert footage from different venues and not even know it. And for someone who is super detail oriented, you would think she would match her lips to the vocals in the parts where she’s CLEARLY not singing. 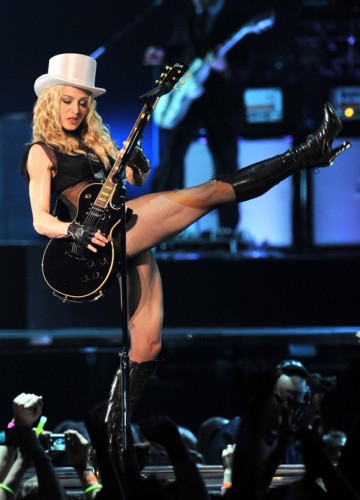 It’s great getting shit for free, but in all honesty, I was planning to buy it, I swear it! After all…she’s still Madonna.

SNAP SHOT, MUG SHOT BLAST FROM THE FAB PAST