I WANT YOUR UGLY

I WANT YOUR DISEASE

Every road leads to Madonna. There isn’t a single bitch with a slit who has a dance hit that hasn’t been compare to M. Of course the new “New Madonna” is Gaga. But on the for real tip though, that little alien sex fiend is more Gwen Stefani meets Marilyn Manson, bumps into the artist formerly known as Ziggy Stardust, has lunch with Bjork, gets sprinkled with a little Britney, and then she pretty much rolls around with every here-today-gone-tomorrow dance Diva to ever sweat at a pride parade and then hit a White Party stage. The difference being the obvious big bucks fronting the Gaga brand, making her more polished than former dance starlets and better groomed to be the next…well, you know who.

Not to start any shit (well, maybe just a little), but where do people get Madonna in Gaga? She’s too weird and artsie fartsie to be sensual, and there’s nothing sexy about the raccoon masks, green frog getups, and alien space suits, which are like sooo Bork decked in a dead swan dress, circa 2001. Yet, she’s supposedly selling sex, isn’t she?—“Guess what Madonna, I’m hotter than you are,” She announced in that terrible SNL skit a few months ago. She was joking. Or was she?

Gaga may be younger, with a voice that’s stronger, but it’s up for debate whether she’s hotter. You gotz to admit, Madonna at fiftysomething is still giving us good face. She never hid the gap-tooth grin, Italian nose, bushy eyebrows and all. Her splash into the scene seemed effortless, it was flirty, cheeky and fun. And best of all, she didn’t take herself too seriously (we’ll leave the Kabalah crap out of this one). Gaga on the other hand is a force that demands recognition. She’s putting out serious art. It is severe. And all over the place. There’s a constant clawing and scratching for over the topness. Plain and simple: Lady Gaga tries too hard…while hiding her mug inside a cool looking lampshade…that’s supposed to be a helmet…or a hat…? 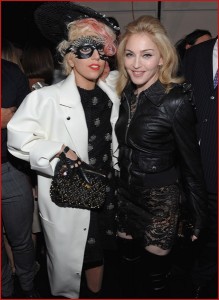 I like Gaga’s music (“My po-po-po-poker face, my po-poker face”), just like I once liked Jody Watley, Cee Cee Peniston, Taylor Dane, Cristine W, Martha Walsh, and I forget the others. You have to appreciate her art for the sake of art in itself. I gottah give her credit for trying to come up with new ideas, cuz new ideas are hard to come by nowadays…like those creepy Christmas lit dinosaur bones that she wore at the American Music Awards (Hot? Um, try NOT!)—HOWEVER you can’t gasp Madonna and Gaga in the same breath. That’s like comparing Madonna to Marilyn Manson and so forth. 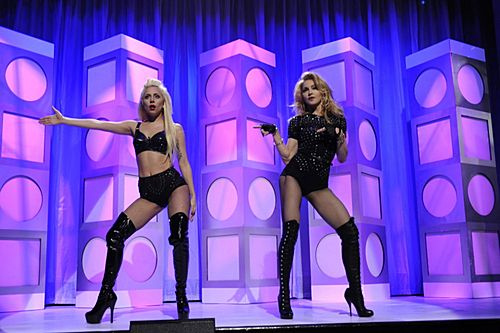 How far G will go, remains to be seen, BUTTT…