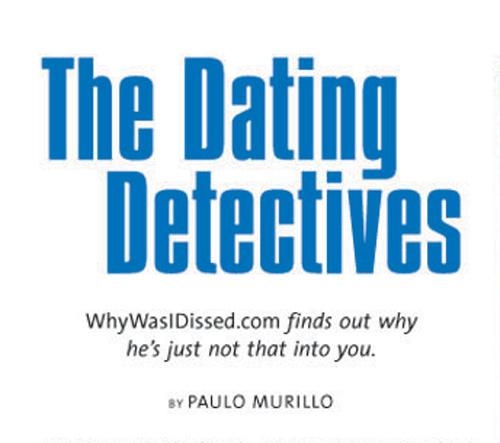 I recently put my best face forward and embarked on the getting-to-know- you motions of dating a guy that I met through a friend. He’s not the type of guy I normally date, but his charming character had a gravitational effect that made me feel an instant connection. We went on a few fun dates and everything appeared to be coming up roses. Then all of a sudden, SNIP! He cut me loose and then he pulled a ghost, POOF! He turned out to be another walk-away Joe. He never returned my calls.

Clearly he lost interest. However, it really tripped my wire that he lacked the human decency to give me the courtesy of a “Dear John” conversation. Instead, he left me to wonder why. Why keep me hanging on a limb in limbo? Did I have bad breath? Was it something I said? Was it something I did or didn’t do? How many of us have been dissed, as in dismissed, and disrespected this way? Ever lower your dating standards and then come to find that you don’t meet your lower standard’s standards? It happens to the best of us.

I could not stop spinning over that walk-away Joe. Then a friend sent me a link to the website whywasidissed.com, which might answer the obvious question:Why was I dissed? I thought it was a big joke, but nope; this site has been investigating dating mysteries similar to mine since 2005. The objective is to bring closure to both parties by opening the lines of communication. They also have a Dissed Forum, where you can chat with the jilted and a Dating Doc- tor who is on standby to help with dating disasters. It all seemed pretty cool. I decided to give them my case.

The investigation is free and open to everyone regardless of sexual orientation. All they want is some personal data. I gave them my name, e-mail address, sex, age and zip code. Much to my horror, they also wanted his name and e-mail address. They actually con- tact the avoider and ask him a list of questions. I quickly typed his info and clicked on the tab to start the investigation before I had second thoughts. Then it occurred to me that I possibly set myself up to be dogged on top of already being dissed. Was I really ready for a bitter dose of brutal honesty? Their disclaimer warns that the truth may hurt, but it can also set me free. I was banking on the guy dissing them the same way he dissed me. However this was not the case.

Shortly after, I received an e-mail that read:“Your Dating Mystery,Solved! Thank you for allowing Why Was I Dissed to provide closure. We hope this informa- tion sheds a new light. ‘Walk-Away Joe’ said the reason you were dissed was because: Too Needy. High maintenance. Grew apart. Not compatible. Different Values. High Expectations. Too easy. Didn’t want the drama of ending it.” And for “other” he added: “A very strange person.”

There was a personal message: “Dear Paulo, Trust me, I know my part in all of this. I have thought about it. I do not know why you think I dissed you. If people stop calling, it is because they are not interested. I didn’t feel we had too much in common. That is all. I hope this thing brings you closure. Take care man.”

“Now it’s time to move on,” Why Was I Dissed concluded. “Get up! Get over it and get dating!”

Ooh, I was salty at first! His answers opened a whole new can of questions and forced me to reflect on a thing or two about myself, but this guy didn’t really know me. We weren’t compatible. That’s all that matters. Overall, the concept of whyiwasidissed.com is positive. The fact that he answered made me feel less dissed, and it must’ve made him feel like less of a douche. Eventually there was a sense of relief.The truth is, any guy who thinks I am “a strange person” obviously thinks of himself as someone normal. And I’m not interested in dating normal guys, so like yeah, the beat goes on and on.
__________________________________________________