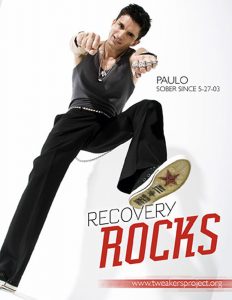 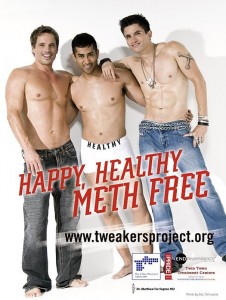 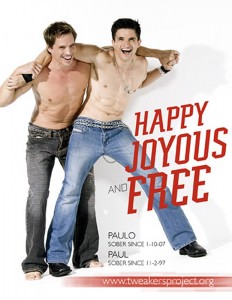 When my friend Jimmy Palmieri called me to ask me to lend my name, face, and voice to a campaign that he was developing, which focuses on being meth free, happy, healthy and um"¦sexy, I thought he was tweaking. It all sounded good over a Myspace status update, but meth campaigns mostly focused on the poor unfortunate souls who lost themselves to their addiction. Rarely was the focus on the bright side of recovery. It all struck me as a crazy tweaker's project, but that's how the Sober Sizzles Campaign was born.

All my friends"”including my boyfriend, begged me not to do it. They said I would be the poor poster person for crystal meth addiction. I hate everything that's associated with the word tweaker, but alas, tweaking is a part of my story. I have to stay honest about my truth, lest I forget what it was like. If putting my best face forward gave someone some form of hope that it's possible to beat this drug, then that's more hope than I ever got when I was going through my own shit. I told Jimmy P to "Count me in," thinking inwardly that there was no way this campaign would ever see the light of a printing press. That man proved my ass wrong ten folds over.

Jimmy is a combination of ballsy, relentlessly pushy and charming as all damn hell. Watching his lover suffer from meth use prompted him to get involved. He directed the film "Tweakers" and started the Tweakers Project, which (irony aside) is an outreach program for people who suffer, or know someone who suffers from this nasty addiction (check out www.tweakersproject.org if ya don't believe me). For many months, he sent me random progress notes. He landed other models, he obtained the support of The City of West Hollywood, and then he landed famed photographer Eric Schwabel (check out his hot shots at erischwabel.com) to lend his studio and his time, practically free of charge.

Before I knew it, my ass was being plucked and pulled and painted and lit and posed for a full-on Tweakers Project photo shoot. I had to try to hold my own against singer and male model Paul Lekakis of 90's "Boom, boom boom, let's go back to my room" stardom—I remember Paul from when I was a teen. I think he performed New Years Eve of ’93 at the under 21 backlot of Studio One, where Ultrasuede now stands in W. Hollywood. I always dismissed him for a big joke, but in retrospect, Paul was a balls out openly gay singer who wasn't vague about his sexuality like Morrisey, he didn't hide under drag queen getups like Boy George and he didn't pretend to wanna have sex with supermodels like George Michael. He was a full-blown fag, he was hot, and he made no apologies for wanting to have nasty butt sex all night because it felt right. He was ahead of his time–at least in the early 90’s when I first heard of him, which some may say cost him his career, but for what it's worth (not much where my boyfriend is concerned), the teenaged version of myself never imagined he would one day bump and grind crotches with that larger than life blonde blue-eyed man who was singing and dancing on stage"”in his underwear, I might add. It was more than a little intimidating.

Anyway, the pictures were selected, the campaign went before committees, some money was raised and the Sober Sizzles Campaign finally had a soft launch on May 2, 2009, with a full launch set for West Hollywood's Gay Pride in June. Each image has it's own theme. As I mentioned before, I'm the Recovery Rocks guy, because well"¦I rock (cough). There are referrals to a list of outreach programs, drug hotlines, rehabilitation centers, recovery programs and so forth. I figured if we can succeed in pointing one tweaker in the right direction, then that's worth staying clean and sober for one more day. As I write this, the campaign has already reached thousands of people on a global scale and the word continues to spread. So there!

I'm sorry I doubted him. It's been a crazy ride. The man said he was gonna do it and the fucker actually did it! 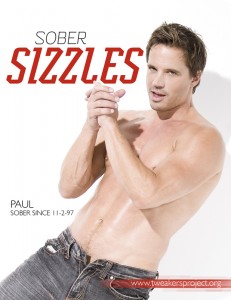 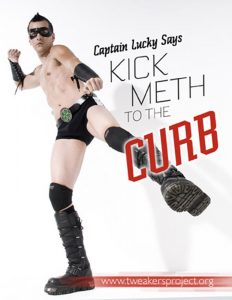 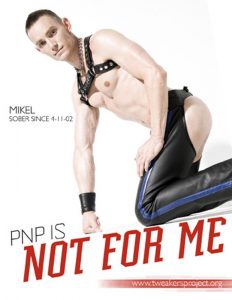