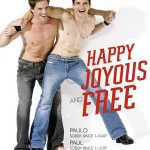 I stepped into 2009 celebrating in a huge way. Jan. 10 marks two years of continuous sobriety for me, folks. That's 730 days of crystal-meth freedom for a once tragic mess who couldn't scrape together more than two weeks of clean time to save face. Sobriety is a horse of a different color from new years past, where I swore I would give that life a rest, only to find myself crawling out of a gutter feeling dirty, defeated and sketched out of my skull. It was a dark and miserable existence. I was in my early 20s in the mid-'90s when I snorted my first bump of Tina. Those were tough times to be young and gay. The shadow of AIDS from the '80s forced a lot of us to cower. Casual sex was out of the question when kissing a guy was cause for anxiety. All that depression and sexual repression forced me to take my problems to the dance floor. I didn't start drink- ing and drugging to fit in; I boozed and used to stand out! Insecurity attracted me to nega- tive forces. I drank to lose the edge, and I snorted cocaine to feel edgy. Then crystal meth burned my nostrils and it was on and stomping until sunrise. I never had a death wish. I was a good-time guy.

Meth use can force a life to dangle from the ledge of despair around the holidays. It seems impossible to put the glass pipe down. It was the holidays of 2006 that nearly did me in. I landed in the hospital only nine days into 2007 due to a meth-induced anxiety attack that felt like a heart attack. I was never out to destroy myself, yet I fell apart when they strapped me to a gurney. I was done.
The only way out of a rocky bottom was to reach out for help. The first step was the hardest. I took my sober baby steps in rehab, but I owe my two years of substance freedom to a 12-step program, which continues to provide me with tools to maintain my recov- ery and links me to people who share my experience, give me strength and fill me with hope.

I'm so grateful this year. I have a newfound faith in the universe. I'm HIV-nega- tive, and I'm healthy. I have a connection with my family; my friends support me, and I have a boyfriend who understands my heart. Most importantly, I feel some relief from the demons of my past obsessions. Life is pretty good.
Optimism is the big theme for 2009. My friend Jimmy Palmieri (WeHo city official and director of the movie Tweakers) masterminded an anti-meth campaign that hopes to spread some good faith to the hopeless meth addict who suffers in lonely silence by displaying former addicts with various lengths of sobriety. I've been asked to show that it can be done. The campaign is called "Sober Sizzles." It will give meth addicts access to several drug and alcohol treatment centers, outreach programs and harm-reduction hotlines (check out tweakersproject.org for more information). Where I once hit rock bottom, I now find myself under a headline that reads "Recovery Rocks."

Yes, I lost me to meth, but there is a shining flame of hope on the flipside. Your story may not match mine, but if you believe you're having problems with meth use, you can start recovering right now. Help is everywhere, be it a 12- step program, rehab/detox center, therapy or community outreach program (check out weholife.org for starters). There is no need to jump from that ledge of despair. A new year is a perfect time for a new beginning. End the vicious cycle of self-betrayal and further self-destruction. Say that you're done. You won't have to do the rest alone. There is hope.
______________________________________
Originally published:HEALTH & FITNESS – IN Los Angeles January 19, 2009