On September 10th 2006, my editor took me to dinner at Jerry's Deli in Beverly Hills. I was munching on a big ass, nasty ass pastrami sandwich with American cheese ("and a Diet Coke please"), when my mentor, collaborator and long time friend gave me some bad news: FAB!, Los Angeles’s only gay and lesbian biweekly newspaper was folding effective immediately and my column "Love Ya, Mean it" was sinking with it.

I was shocked"¦and relieved, and mournful and happy, and hopeful, and numb, and scared shitless. And YES, I was BITTER as all damn hell! On the one hand we looked like quitters. On the other hand, the publishers had been overly generous with their continuous life support of a paper that had been limping on its hind legs for far too long (let's be for real here). On the one hand, I was sooo grateful I wouldn't be writing that damn column. On the other hand, it broke my black little heart to think that"¦well, I wouldn't be writing that damn column anymore.

I wrote that “damn” column for nearly seven years (waayy back when columnists were cool). I had a good run. At my very best, I was “In the Life” and on Front Street with my Underoos wrapped around my knees, and dared to go where people refused to go, waayy back when there was too much political correctness in the gay community. At my very worst, I abused my so called power. I was dubbed the O.G. evil, bitter, catty Queen of Mean, waayy before there was an evil, bitter, catty Queen of all Media (good for her)—I won’t shit ya. I’m rather fond of that column. I can’t help but look back at all that madness with cringe-inducing pride and think…”Did I write that?”

Then there was FAB!, the newspaper as a whole with its trashy tabloid format and ridiculous headlines about "Sex, Lies & Scandal!" There were the repeated "Fiascoes, Tragedies & Confessions". There was constant tisk, tisking at this or that homophobic person in the news. There were "Gays from Outer Space". There were "Gay Vampires", a "Gay Mafia", a “Sex Police”, “PC Police” and we were always "Sleeping with the Enemy". They wrote about "When Trannies Attack!" We were always “Losing Love” and there was lots of "Fear and Loathing". A standout for me is the one about those Iraqi gay boys who were "Hung" instead of hanged for being gay"”"Boys Hung", the cover read. We were a perfect match.

But once you got past the screaming headlines talkin’ about "The Sky is Falling", it was actually newsworthy. It wasn't hard news, but it was straight up to the head up. Then there were the home spun columns voicing different opinions, be they about AIDS, The World, The Community, The City, Real Estate, Home, Gay TV, and of course we had the Letters Section. I fondly remember Rex Wockner, Ed Walsh, Ann Rastow, Patrick Tsakuda, Jerrick Jake Enclan, Tim Krestlake, Ken Knox, and I forget the rest. FAB! was not afraid to call 24-Hour Fitness homophobic back when the company took over the West Hollywood Sports Connection (Sports Erection) gym. They came in ripping out rainbow flags and talking about a straight gym with childcare facility, waayy back when WeHo didn't own any children. It was a gay city.

And so FAB! came to pass. Economics eventually slayed the dragon. The publishers decided to move towards more mainstream–if not greener pastures where there’s more of some green stuff. They gave FAB! a quiet bullet and swiftly focused their energies on their more hetero health and fitness magazine, which continues a successful run today. Ironically, 24-Hour Fitness is now one of their advertisers. But then again a rainbow flag also now hangs proudly in the lobby of 24-Hour’s WeHo location. It’s no longer a straight gym, but then again WeHo isn’t exactly a gay city anymore. And so it goes.

Anyway, I can’t exactly start writing a blog without first giving FAB! some mad props for printing my name for the very first time. It all ended so abruptly. I never really had a chance to say goodbye. The column ended the way it began. I wrote about bald headed bitches with plucked eyebrows at Circus Disco (“The Other Side of Santa Monica Blvd.”). And my exit note was about the pretty speedo people at a West Hollywood pool party (“Bikini Bottoms”). It was too perfect. And so it goes.

A lot has happened in two years. We have a ton of catching up to do. 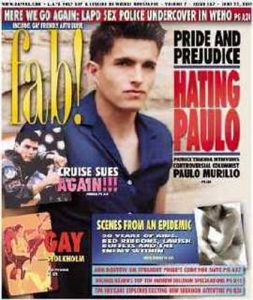